Please ensure Javascript is enabled for purposes of website accessibility
Log In Help Join The Motley Fool
Free Article Join Over 1 Million Premium Members And Get More In-Depth Stock Guidance and Research
By Maurie Backman – Jun 26, 2020 at 5:18AM

A large number of Americans could find themselves in dire financial straits in the coming months due to a lack of savings.

Now that we're officially in a recession, many Americans are grappling with financial insecurity -- and understandably so. But those with solid emergency savings may be less likely to worry at a time like this.

Unfortunately, most Americans are ill-prepared on the emergency-savings front. Only 44%, in fact, say they'd be able to easily come up with $2,000 within 30 days for emergency purposes, according to a recent survey by Edelman Financial Engines. In other words, more than half of Americans don't have easy access to $2,000, which could put them in a very bad position in the coming months, especially if their income situation worsens.

Though the country, on the whole, is beginning to open back up and jobs may be added in the coming weeks, a second wave of COVID-19 cases could thwart any hopes of a quick economic recovery. In fact, it could make things exponentially more dire, leaving those without adequate emergency savings in serious trouble. 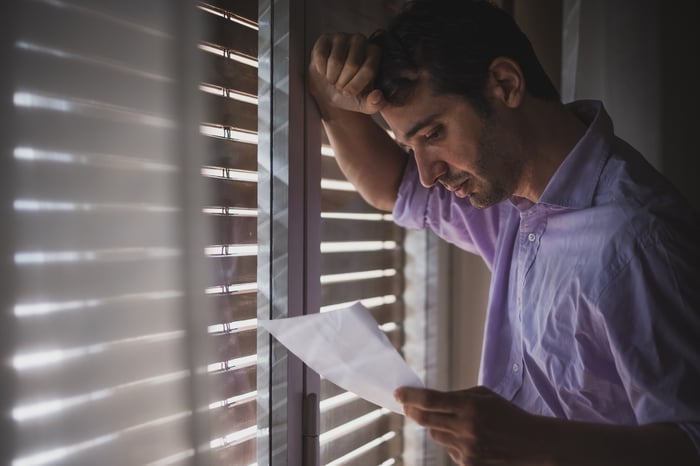 The consequences of not having emergency savings during a recession

Going without emergency savings is an unwise thing to do, in general, but it's especially dangerous during a recession. If you lose your job and remain out of work for quite some time, you'll risk racking up unhealthy debt if your unemployment benefits don't replace enough income to make it possible to keep up with your bills.

But that's not all. In addition to taking on debt, you'll also risk having to cash out investments when they're down, thereby locking in losses permanently. Imagine you're short $2,000 for near-term bills and you don't have that money in savings to access. If you have $2,000 worth of stocks, tapping your brokerage account may be your only choice, but if you do so at the wrong time -- namely, when your stocks have lost value -- you'll lock in that loss rather than ride it out.

Finally, if you're without money during a recession, you may be tempted to raid your retirement savings to access cash, which could put you in a dire financial situation later in life. This danger especially applies during the COVID-19 crisis, because thanks to the CARES Act passed earlier this year, taking an early retirement plan withdrawal is easier than ever -- because you won't face the penalties that are normally associated with removing funds from an IRA or 401(k) prior to age 59 1/2. You will, however, risk a financial shortfall later in life if you use your retirement money for something other than retirement.

How to build an emergency fund during a recession

It's one thing to save for emergencies when the economy is in decent shape but another to build cash reserves when the economy has already tanked. If you're still employed, begin cutting back on expenses immediately to bank as much cash as you can. You may actually be spending less on certain expenses, like commuting or dining out, because of the ongoing crisis, in which case you have a key opportunity to pad your savings account.

You should also look into a side job you can do remotely, as an in-person gig may not be the safest bet right now. If you can tutor online, edit content, create websites, or do anything else that pays from the comfort of home, you can use your income from that gig to boost your savings so you're ready in case your financial situation takes a turn for the worse.

Though it's not always possible to predict when a recession will strike (case in point -- the current economic crisis pretty much erupted overnight), one thing you can do is prepare accordingly by having a healthy level of savings. If you're not there yet, make building an emergency fund your priority as we navigate these uncertain times.