Please ensure Javascript is enabled for purposes of website accessibility
Log In Help Join The Motley Fool
Free Article Join Over 1 Million Premium Members And Get More In-Depth Stock Guidance and Research
By Harsh Chauhan – Jun 27, 2020 at 9:35AM

The iPhone maker could start making the iPhone SE in India to better take advantage of this fast-growing smartphone market.

Apple (AAPL -3.65%) brought the iPhone SE moniker back to life earlier this year to target the midrange smartphone segment, packing the latest A13 Bionic processor in a compact form factor priced at an attractive $399 for the base model.

The second coming of the iPhone SE should have helped Apple crack price-sensitive smartphone markets such as India, where demand for mid-range devices has been increasing at a terrific pace. But Apple committed a blunder by pricing the iPhone SE at a big premium in India, thanks to duties and taxes. However, the iPhone maker is reportedly looking to set that right by assembling its entry-level device in India itself. 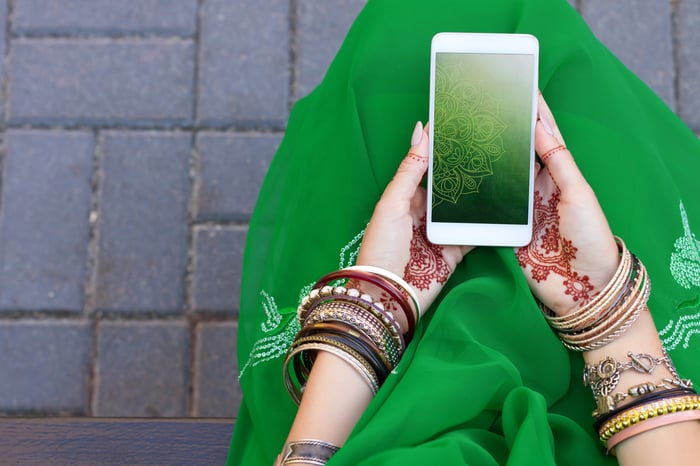 Citing sources familiar with the matter, AppleInsider recently reported that Apple could begin assembling the iPhone SE in India. The Indian government has been taking steps to invite smartphone manufacturers looking to move their production out of China in the wake of the coronavirus pandemic by offering them production-linked incentives.

The government has launched a $6.6 billion plan for five global smartphone OEMs (original equipment manufacturers) who will be incentivized for locally made devices to the tune of 4% to 6% in cash for the next five years, if they meet certain targets. Apple contractors Foxconn and Wistron already have manufacturing facilities in India, with the latter said to be the manufacturing partner for the iPhone SE.

So it is not surprising that Apple is looking to ramp up production of its entry-level device in the country, as doing so could help bring down pricing substantially.

The iPhone SE is currently priced at 42,500 Indian rupees (roughly $561 at the current exchange rate), which is significantly higher than its $399 price tag in the U.S. In fact, the iPhone SE's price in India is one of the highest in dollar terms compared to the rest of the world. If Apple starts manufacturing the device in India, it can avoid the basic customs duty of 20% levied on imported smartphones in addition to a 10% service charge on the import tax.

Throw in the production-linked benefits that the Indian government is promising, and there is a chance that Apple could reduce the price of the iPhone SE by as much as one-fourth of its existing price by producing locally in India. That could bring the price of the device to around 32,000 rupees (roughly $425), putting it in the sweet spot of India's booming mid-range smartphone space.

According to IDC's estimates, sales of smartphones priced between $200 and $500 saw 55.2% annual growth in India last year. The research firm points out that this price segment accounted for 19.3% of total smartphone sales of 152.5 million units in the country in 2019. So, Apple could unlock a huge opportunity by producing smartphones in India. However, this is just one part of the bigger picture.

The Indian government is encouraging smartphone manufacturers to shift their supply chains to the country, which will help them avoid import duties on components. This is probably why Apple is now considering making a new smartphone in India as compared to its earlier strategy of selling older models there.

The iPhone SE's internals are identical to Apple's current flagship -- the iPhone 11 -- to quite some extent, including the A13 Bionic processor. So the anticipated production of the iPhone SE in India means that Apple is probably working toward making its flagship phones there.

If that happens, Apple should be able to reduce the price of its flagship offerings in the country. The company struck gold with the price of the iPhone 11 in India last year. This sent the sales charts ringing as Apple's shipments in the country jumped 78% in the first quarter of 2020. However, the weaker rupee and an increase in taxes have led to a jump in the iPhone 11's price of late, which now costs 68,300 rupees ($903 approximately) on Amazon India for the 64 GB model.

For comparison, the same model costs $699 in the U.S. Apple could reduce this huge price difference in India by manufacturing locally and improving its prospects in India's booming smartphone space. Cisco estimates that smartphone sales in India could increase to 829 million by 2022 as compared to 404.1 million in 2017, recording a compound annual growth rate of 15.5%.

The coronavirus pandemic may dent the momentum as smartphone shipments in the first quarter of 2020 increased just 4%. But the long-term picture remains intact, thanks to catalysts such as cheap data, a young demographic, and a massive population -- all of which could pave the way for Apple to make a bigger mark in India's booming telecom space.