You don't need to be an investing genius. Slow and steady wins the race to a secure retirement.

"$1 million" isn't what it used to be -- but it's still a tidy sum. When you consider that one in three Americans still has less than $50,000 tucked away for retirement, aiming to amass $1 million by the time you retire seems a pretty decent goal to start with.

And here's the thing: You can become a millionaire retiree, and with a bit of patience, it's not even that hard to do.

Say you start out by investing just $10,000 each in three different stocks. Every month, take $100 out of your paycheck for each of them, and add that to your investments. If all the stock market does is just grow at the long-term average rate of about 10% a year, in 28 years you will have $1,000,000 saved for retirement.

(And feel free to double-check my math. Here's a U.S. government website that can help.) 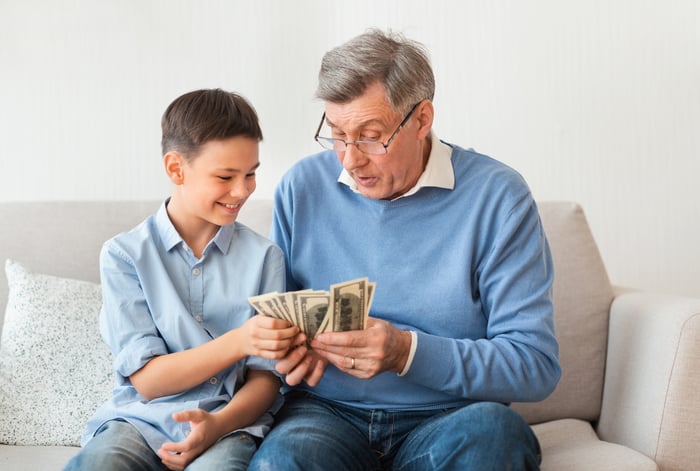 I've argued multiple times over the years that Lockheed Martin has not years, but decades of success ahead of it. The largest pure-play, publicly traded defense company in the world, Lockheed Martin holds the contract to build F-35 stealth fighter jets for the United States military and its allies. Over time, analysts forecast that the F-35 program will grow to account for as much as half Lockheed's revenue stream.

And because the F-35 is expected to remain in active use through at least 2065, this means that about half of Lockheed's revenue stream for the next 45 years is basically "in the bag." So long as Lockheed can earn decent profits on this product, chances are good that the company will remain a strong profit earner, and a generous dividend payer, throughout the retirement years of anyone buying it today.

Dividend-wise, Lockheed pays its shareholders a 2.6% dividend yield, roughly 0.5 percentage points more than the average stock trading on the S&P 500. Profits-wise, Lockheed shares sell for about 16.8 times trailing earnings -- a 25% discount to the average P/E ratio on the S&P.

Between the generous dividend and the cheap share price, Lockheed Martin stock is a great "defensive" play for any investor's portfolio.

Another stock I feel has a bright future -- and makes for a great addition to a portfolio for retirement -- is Ally Financial. Once the financing arm of General Motors, Ally has evolved into a leader in the online banking industry. Offering above-market interest rates, round-the-clock customer service, and no monthly account maintenance fees, customers have flocked to Ally.

Over the 10 years between the last financial crisis and the latest one, Ally has grown to become one of the top 20 banks in the U.S. by assets, posting "double-digit growth" in deposits every year of its existence (up until the coronavirus arrived on the scene, at least).

The coronavirus threw that growth trend for a loop, of course, and Ally saw a 52% reduction in revenue last quarter as consumers hunkered down for the pandemic. But the coronavirus has disrupted the ordinary operations of larger banks, too, which depend on far-flung chains of physical bank branches for their business. In the coming months and years, I believe that online banking will become more relevant than ever -- a good thing for Ally's business.

At a valuation of just 11 times trailing earnings, a projected long-term earnings growth rate of 10%, and a 3.9% dividend yield, I think it's likely Ally stock will survive this pandemic, performing at least as well as the broader market -- and probably better.

For my final pick today, I want to go back to the granddaddy of value investments: Warren Buffett's Berkshire Hathaway, which has spent the better part of the last six decades accumulating some of America's best businesses under its corporate umbrella and using them to generate cash for buying even more great businesses.

Over the past year, the Oracle of Omaha's tried and true, conservative investing style has resulted in a stock that's underperformed an overheated stock market by more than 20 percentage points -- but in an economy such as this one, I happen to think that conservative investments are the right way to go.

In Buffett's case, the master investor has opined that Berkshire Hathaway stock is a "buy" any time its price-to-book value ratio touches 1.2x, and that Berkshire itself "will be aggressive" in buying back its own stock at such valuations. With Berkshire stock currently fetching 1.18 times book value on the open market, that means Berkshire Hathaway probably has already begun buying. Indeed, with more than $137 billion in cash and equivalents on its balance sheet (per S&P Global Market Intelligence data), Berkshire Hathaway has the ability to buy back a lot of stock if its price remains this low -- or to make additional profitable acquisitions of quality companies stressed by the pandemic, if Buffett sees better prices elsewhere.

Berkshire Hathaway has already made Buffett a billionaire many times over. Chances are good it could make you at least a millionaire retiree.