Years of unchecked spending may finally be catching up with the sports apparel specialist.

This past weekend, athletic apparel company Under Armour (UA -1.96%) (UAA -1.95%) informed collegiate sports powerhouse UCLA that it wanted out the 15-year, $280 million sponsorship deal it signed in 2016. That agreement put the brand in the spotlight by putting its logo on the school's athletic uniforms. But, as the statement from Under Armour explains, "[W]e have been paying for marketing benefits that we have not received for an extended time period."

Under Armour didn't specify if the "extended period of time" in question was solely due to coronavirus-related cancellations or if it had more to do with UCLA's somewhat diminished reputation of late as a sports powerhouse. Either way, it costs the apparel maker nothing to at least try to back out of an unfruitful arrangement.

It wouldn't be naive of investors to wonder, however, if the proposed end to the largest collegiate athletics sponsorship deal on record actually points to a much bigger fiscal problem for the company. 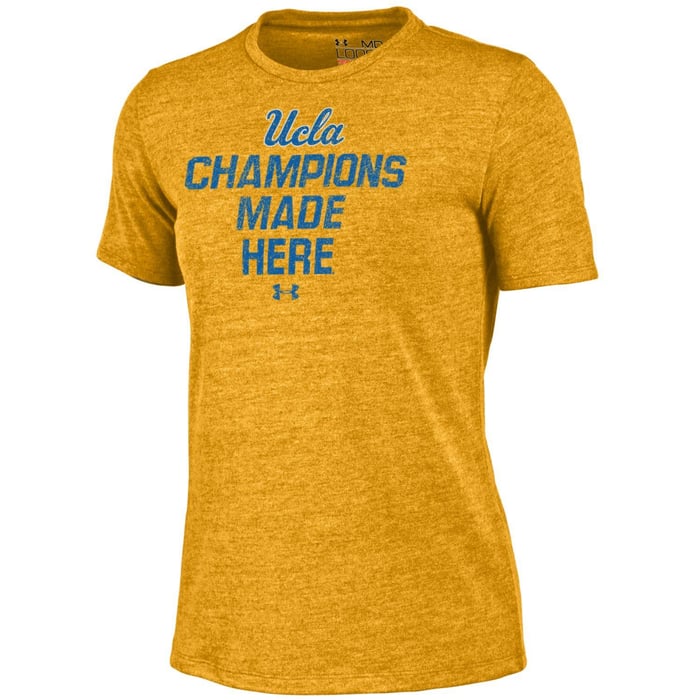 Par for the course

Massive deals between sports brands and colleges are nothing new. Nike (NKE 0.47%) inked a deal with The Ohio State University back in 2016 worth $252 million. Adidas (ADDD.F 1.20%) is prepared to pay the University of Kansas $14 million per year for the next 14 years to be the brand associated with the school's athletic programs.

It's not just schools, either. Nike has named NBA star Lebron James a lifetime partner in a deal that's ultimately worth more than $1 billion to the basketball phenom. Soccer star Lionel Messi has a career-long deal with Adidas that nets him at least $10 million per year.

It's Under Armour, however, that's arguably the least discriminate and most generous in paying for celebrity endorsements. Basketballer Steph Curry, the NFL's Tom Brady, professional golf standout Jordan Spieth, and even wrestler-turned-actor Dwayne "The Rock" Johnson have all been or are still a part of Under Armour's stable of superstars, just to name a few. Eight-figure deals are common, while nine-figure deals aren't unusual.

The problem: Under Armour's associations with a growing number of sports superstars and high-profile collegiate programs aren't paying for themselves like they used to. The move to negate the deal with UCLA could in some ways be a sign of what's to come, including fewer and smaller deals.

It's difficult to pinpoint exactly what the company owes schools and athletes at any given time. Tom Brady's contract, for instance, reportedly comes with an equity-based component. Jordan Spieth's deal likely comes packed with performance requirements to fully collect all of his potential compensation.

Still, between the sheer number of deals Under Armour has made on top of the bare minimums it's guaranteed to each of these schools and professional athletes, the company is on the hook for a at least $679 million worth of future marketing-based sponsorships and endorsement payments, according to its 2019 annual report. That's down from the year-ago minimum commitment tally of almost $735 million, but it's still a sizable chunk of change for a low-margin company only doing about $5 billion worth of revenue per year.

And again, that's just a minimum. Payouts to people and colleges could add up to significantly more.

In the meantime, it does indeed look as if Under Armour is writing more and bigger checks to schools and sports superstars. It's a choppy increase when just looking at one quarter's comparisons. However, when taking a step back and looking at the past several years' worth of consecutive quarterly data, the broad trend is clear -- even before the disastrous first quarter, selling and administrative costs as a percentage of sales have grown steadily. 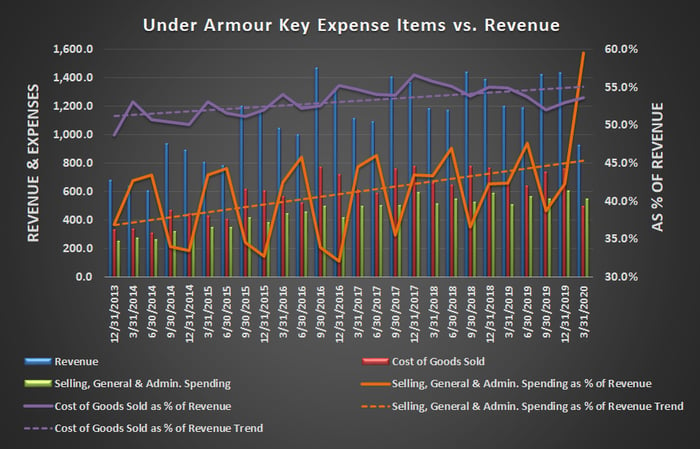 Notice adding scale hasn't helped lower the company's cost of goods sold as a percentage of revenue, either. One might have expected at least a modicum of progress on that front by now for the fairly young company.

To its credit, Under Armour seems as if it's trying to get a handle on the endorsement and college-exclusivity spending. As of 2016, its minimum marketing commitments exceeded more than $1.3 billion -- a key part of the reason selling, general, and administrative expenses have ballooned up so quickly since then.

The change Under Armour appears to be working on is no small matter, though. Much of its historical growth has relied on the use of celebrity affiliations at any cost to excite consumers. It remains to be seen if it can succeed in the future without shelling out the big bucks these sports stars and universities have been trained to expect.

And that's what makes the timing of this public standoff with UCLA so curious. On the surface, it could be chalked up to more fallout from the coronavirus pandemic. The ripple effect of COVID-19, however, may have simply accelerated Under Armour's inevitable collision with its spending. Underscoring this prospect is the $325 million worth of operational spending CFO Dave Bergman is looking to cull from the budget this year alone.

Given this backdrop, investors shouldn't be surprised if the effort to break the agreement with UCLA marks the beginning of a bigger, savings-conscious trend.