Please ensure Javascript is enabled for purposes of website accessibility
Log In Help Join The Motley Fool
Free Article Join Over 1 Million Premium Members And Get More In-Depth Stock Guidance and Research
By Maurie Backman – Jul 4, 2020 at 9:06AM

If you're on unemployment but also get a health insurance subsidy, you could end up with a big problem on your hands.

Millions of Americans have lost their jobs in the wake of COVID-19, and for some, that means a loss of health insurance, as well as a paycheck. But not everyone gets health insurance through work. Some people get their insurance through the healthcare exchange, and under the Affordable Care Act, many are entitled to subsidies to help defray their premium costs.

If you're entitled to a health-insurance subsidy, you may be aware that it's based on your modified adjusted gross income for your coverage year. But what happens if you're out of work and your income increases? Thanks to the CARES Act, that's the situation a lot of people are in, and while it's a good thing in theory, it could cause problems from a subsidy standpoint.

Has your income changed for the better on unemployment?

Many workers who are collecting unemployment are actually making more money now than they did back when they were working. The reason? The CARES Act, which was passed in late March, allowed for a $600 weekly boost to unemployment benefits through the end of July. 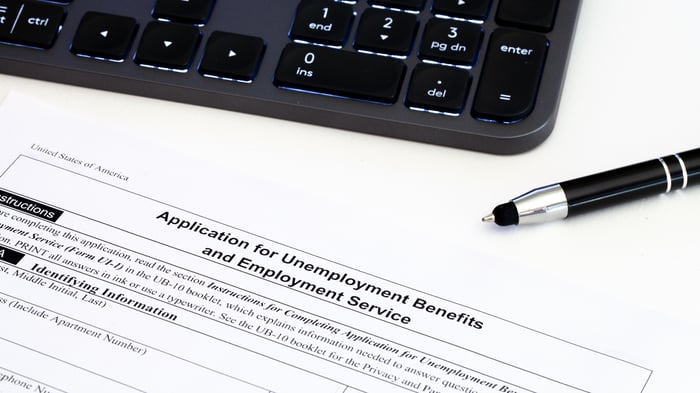 Normally, unemployment benefits are based on your former earnings coupled with your state's formula for calculating benefits, and they usually replace just a portion of your former earnings. But when we add an extra $600 a week, that paints a very different picture. And to be clear, that extra $600 is something all unemployed workers are entitled to, even if it results in a raise.

How does this impact your health-insurance subsidy? Those entitled to that subsidy are allowed to estimate their total income for the year and claim that money in advance based on their projected earnings. If you go that route, your subsidy will be sent to your health insurance provider on your behalf. If your income estimate is accurate, there's no problem. But if you underestimate your income, you risk having to pay that subsidy back when you file your tax return the next year.

Say you normally earn $600 a week, only you're unemployed. Let's also imagine that under normal circumstances, your weekly unemployment benefit would be $360, only now, you're collecting $360 a week plus $600 for a total of $960.

The $600 weekly unemployment boost is to set to expire at the end of July, and despite the ongoing recession, we don't know yet if it will get extended. But even if it doesn't, be careful if your income got a serious boost for any amount of time during the year. The last thing you need is a huge debt on your hands for a subsidy you need to partially pay back but can't.