Please ensure Javascript is enabled for purposes of website accessibility
Log In Help Join The Motley Fool
Free Article Join Over 1 Million Premium Members And Get More In-Depth Stock Guidance and Research
By Andrew Tseng – Updated Jul 6, 2020 at 10:56AM

These companies offer income investors the possibility of substantial long-term share price growth in addition to their regular quarterly payouts.

It doesn't do retirees much good to fill their portfolios with mature, no-growth companies just because they pay dividends. Instead, retirees should look for nicely growing companies that also pay dividends. That combination should increase total shareholder return, and these three companies provide it.

Starbucks (SBUX 0.04%) could be the perfect example of a dividend-paying company that still has a lot of growth to come. The company is the world's largest coffee chain, with 32,050 company-operated and licensed stores, 18,271 of which are in the Americas.

The Americas are a mature market for Starbucks, but even there the company has room to grow. Management is targeting 3% to 4% annual net new store growth there over the long term, which would mean adding stores at a pace of about 500 a year. 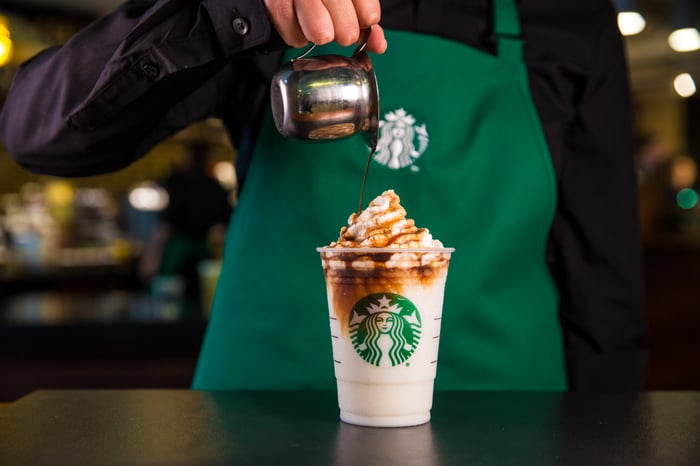 But the biggest growth opportunity is China. Starbucks had 4,351 stores in China as of the end of March, all of which are company-operated. Management expects to add to that count at a mid-teens annual percentage rate over the long-term, including opening about 500 stores this fiscal year (which ends Sept. 27). The company had planned for more than 600 new stores in China this year, but the COVID-19 pandemic compelled it to push some of those openings out into fiscal 2021.

Long-term, the China opportunity is enormous. While there are substantial uncertainties to any long-term outlook, if Starbucks were to reach the same number of stores in China on a per capita basis as it operates in the U.S. today, it would have over 66,000 locations in China. And even its U.S. store density is still climbing.

While some may have considered China's Luckin Coffee a threat to Starbucks's ambitions in China, few still do today. For one thing, a massive fraud was uncovered at Luckin in April that included "fabricated transactions" that resulted in fictitious revenue to the tune of RMB 2.2 billion (equivalent to about $311 million at today's exchange rate) between its second quarter and fourth quarters of last year. That is over 40% of the revenue the company expected to generate in 2019.

Furthermore, Luckin stores aren't even remotely as productive as Starbucks stores. Even including the fictitious revenue, Luckin generated between $50,000 and $65,000 of revenue per average store in last year's second and third quarters. Adjusted lower for the fraudulent revenues, the figures appear to be between $26,000 and $34,000 per average store.

Starbucks is clearly playing on another level. During the same two quarters, Starbucks generated about $190,000 of quarterly revenue per average store in China, which is over six times that of Luckin. Starbucks also generated 5% to 6% same-store sales growth during those quarters, suggesting no obvious signs of harm from competition. Considering the 95% plunge in Luckin Coffee's stock price since its January high, investors appear to agree.

The $0.41 per share quarterly dividend yields 2.2% annually at Monday morning's share price, and the company has a long history of raising its payouts regularly. Last year, the dividend was about 49% of the company's net income. Retirees should consider Starbucks one of the best dividend-paying companies to own given its enduring qualities and the growth runway ahead of it.

Fastenal (FAST -0.15%) is one of the largest distributors of industrial and construction products in the U.S. Not just fasteners -- bolts, screws, nails and the like, although it carries those in vast arrays -- but also a wide range of general industrial supplies.

The company has an enviable track record of growth that's been driven by steady market share gains within the $140 billion North American industrial distribution market. Over the past 20 years, Fastenal stock has generated an impressive total return of 1,665%.

Over the past several years, Fastenal has increasingly expanded its footprint within its customers' facilities with its industrial vending machines and full-blown on-site stores. By making inventory immediately available at its clients' locations, it not only delights customers and increases sales, but also reduces operating costs.

Fastenal ended March with 92,124 vending machines, up 10.4% year over year, and 1,179 onsite locations, up 24.8% year over year. That growth has allowed the company to reduce the number of traditional branch locations it has, as well as its total employee base, while still growing revenue by over 4% year over year.

While Fastenal's near-term fortunes are tied to the industrial economy, which could face headwinds, the company has proven itself to gain market share during downturns and emerge stronger.

Fastenal pays a $0.25 per share quarterly dividend, which as of Monday morning yields about 2.3% annually. The dividend amounted to 63% of the company's net income last year. Investors can also expect continued share price appreciation.

Vail Resorts (MTN 3.85%) is the operator of 37 destination mountain ski resorts and regional ski areas across North America and Australia, the owner and/or manager of lodging properties, and a real estate developer.

As a company reliant on a public physical activity and travel, Vail Resorts has been hit particularly hard by the COVID-19 pandemic. It closed all of its North American ski resorts, lodging, and retail stores in March. It also furloughed all of its hourly employees, its executives have taken pay cuts, and the company has reduced or deferred capital expenditures.

Vail Resorts last paid a $1.76 per share quarterly dividend in April, but management has already announced it's suspending the payout for the next two quarters to preserve cash. With essentially no revenue coming in, but substantial fixed costs, that was a prudent decision.

Assuming that COVID-19 is eventually brought under control -- which won't happen until and unless an effective vaccine is developed -- Vail Resorts is likely to make a full recovery.

Skiing's popularity as a winter outdoor activity should stand the test of time. While some may think climate change and warming temperatures will cause a problem for Vail, that will actually only increase Vail's competitive advantages versus smaller mountains. With potentially higher operating costs for artificial snow-making, Vail should have no problem passing along any potentially higher costs to its customers, especially the likelihood of weaker competition.

The company is scheduled to resume paying dividends next January. Before COVID, Vail paid out about 81% of its net income in dividends in its last fiscal year ending July 2019, which could raise questions about the dividend's sustainability. But Vail is a unique case because the company's non-cash depreciation expenses are far larger than the typical annual capital costs required to maintain its mountains. Adjusting for that, Vail paid out closer to 57% of the cash flow it generated before elective capital projects. That was a sustainable dividend policy, notwithstanding COVID-19.

Investors who want to bet on a skiing recovery could buy the shares, which are still down 26% from the pre-COVID levels seen in February, and reap the rewards when the business is on firmer footing and the dividend payments resume.