There's a new app on your smart TV. It works out.

One of this young month's more interesting developments is Peloton Interactive (PTON -0.29%) scoring a deal to get on Roku's (ROKU -4.70%) platform. It's a move that may seem inconsequential at first. Roku has thousands of apps on its streaming hub, so what's one more? Peloton is known mostly for its pricey treadmills and stationary bikes that come with attached monitors for its connected fitness subscribers, so why should anyone need these interactive workouts on a different screen?

The app became available to stateside users on July 1, but there's more to this partnership than meets the eye. Both players are going to get a good workout here. Let's go over what Peloton and Roku stand to gain. 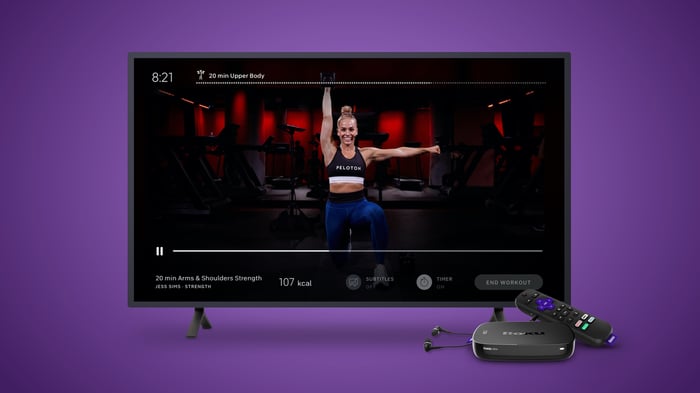 The shape of things

Peloton's on a roll these days. It had 886,100 Peloton bike and treadmill owners paying $39 a month for its connected fitness subscription at the end of March, a 94% surge over the past year. These are largely affluent fitness buffs, failing to flinch at four-figure price tags for hardware and ongoing gym-sized monthly fees. They're a loyal lot with a 93% annual retention rate and churn at a four-year low.

Business is booming for its stationary bikes during the pandemic, with group cycling classes in a crowded indoor space a hard sell in the new normal. The midpoint of Peloton's guidance for the quarter that ended last week was a 128% surge in revenue, nearly double the 66% top-line increase it posted for the first quarter. However, that's not the only way that Peloton is helping folks with personal fitness these days.

Peloton also has a stand-alone digital membership. The plan offers access to the growing catalog of live and on-demand workouts across various activities. Peloton lowered the price of these digital app memberships last year from $20 to just $12.99 a month. It was a surprising move at the time, but obviously the discount hasn't gotten in the way of its flagship high-end connected fitness platform's success.

Peloton had just 176,700 subscribers for the cheaper digital membership at the end of March, but that's still a healthy 64% increase over the past year. This is a small part of Peloton's overall business, but it may not always be that way. These memberships help give folks who aren't ready to spring for a Peloton bike or treadmill a taste of the platform, making them prime candidates for future connected fitness subscribers. With Peloton already on the record as working on a cheaper stationary bike, it's just a matter of time before that platform starts gushing new accounts for its pricier options.

Roku has possibly even more to gain here. Investors see Roku as a streaming video platform, but it has apps for everything from digital music to gaming. An important nugget buried in the press release detailing its partnership with Peloton is that Roku's health and fitness genre is the its fastest growing U.S. segment, with 130% year-over-year growth in activity for the month of May. In short, a growing number of the nearly 40 million active accounts on Roku are realizing that there's more to the platform than just video streaming.

Roku generating traffic for its health and fitness channel matters because it stands to collect ongoing royalties when folks sign up for premium workout apps directly through Roku instead of signing up directly with the fitness provider. Peloton is arriving at the right time, but it's also giving Roku a premium brand with which to drum up win-win registrations.

Peloton and Roku get it. They're both cranking out record engagement levels this year. They're making the most of the pandemic transforming the way folks live their lives in the new normal. We're streaming TV. We're working out at home. Roku doesn't need to convince a lot of people to kick Peloton's tires to make a difference here. It if gets just 0.5% of its active users on the platform, it will double the digital membership base for Peloton. Everybody has a lot to gain here. This is not an inconsequential deal for two of the market's most resilient growth stocks in the current climate.