As the economy partially reopens after pandemic-related shutdowns, lowered interest rates have ushered in a wave of activity in the mortgage banking business. Increasing refinance activity has put a capacity strain on most mortgage bankers, and new mortgage purchase activity is pushing 12-year highs.

CoreLogic (NYSE:CLGX) is a data provider for the mortgage and real estate industry. The flurry of activity in the sector has resulted in updated guidance as well as an unsolicited offer for a potential takeover.

How should a CoreLogic investor react? 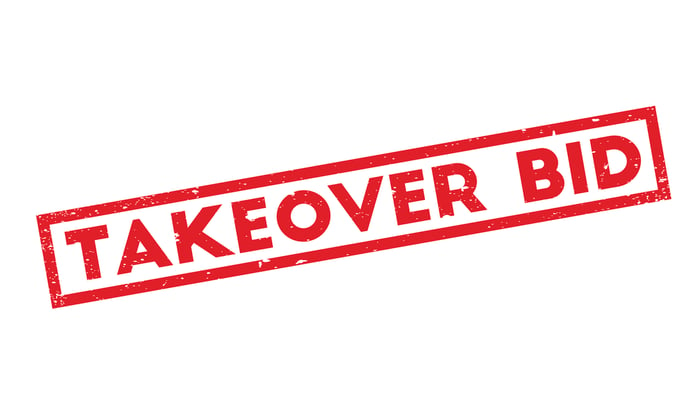 Cannae Holdings (NYSE:CNNE) (NYSE:FNFV) and Senator Investment Group, an activist fund, publicly expressed their interest in buying CoreLogic through a press release. This move is known colloquially in banking as a "bear hug letter." The two companies already own 15% of CoreLogic stock. The letter laid out a rationale for why it is doing this and what it hopes to do when a deal is completed:

We have followed the company closely and have spent the last nine months performing extensive "outside-in" due diligence. Despite its strong market position as a provider of data and analytics for the real estate and mortgage industries, we believe the company will not achieve its full potential under its current strategic plan. We therefore believe the proposed transaction is in the best interests of all the company's stakeholders.

Cannae and its affiliates in the proposed transaction are led by William P. Foley II (Bill Foley), a preeminent operator and investor with an established track record of successful acquisitions and value creation. Under Bill Foley's leadership, we would seek to reignite growth at CoreLogic, increase operating efficiency, and improve overall allocation of scarce capital resources. Bill Foley has extensive experience transforming similar businesses and is uniquely positioned to strengthen the Company's customer, financial, and employee relationships.

Cannae indicated that it's ready to offer $65 per share in cash, which was a 23% premium to the stock's closing price before the announcement was made. Given that the offer was unsolicited, CoreLogic stock immediately traded above the offer price in expectation of an increased offer.

These sorts of situations have a choreography. CoreLogic will almost certainly reject the offer as inadequate, which will trigger the negotiation phase. A deal is usually achieved after a few back-and-forth offers. The stock is now trading with a takeover premium that is higher than its fundamental value. If Cannae walks away, the stock will almost certainly return to its pre-deal price. You can't look at takeover stocks as value stocks anymore. They aren't.

So what happens short-term? This stock is now being driven by professional merger arbitrageurs. On the one hand, they will bid the stock up in anticipation of a higher bid. On the other, the situation will likely become volatile, as hostile merger situations often are.

What's the upside? The best situation for an investor would be a rival bid that triggers a bidding war. Such bids don't happen often, but they're the best-case scenario. It's more likely, however, that the two companies will issue dueling press releases for a while, with CoreLogic rejecting the offer and saying it's not for sale at first. Ultimately, the Board of CoreLogic has a fiduciary duty to maximize the shareholder value, so the situation could result in a friendly deal.

As an investor, what should you do now? Sticking around in merger arbitrage situations is usually best left to professionals who specialize in this complex strategy.

As we saw with the Taubman Centers/Simon Property Group deal, even friendly deals become imperiled when financial markets are suffering. Cannae still needs to raise the money for the deal, and it is only "highly confident" it can do it. If this latest surge of COVID-19 cases worsens and starts shutting down the economy and/or financial markets seize up again, potential deals like this will be the first to go.

Unlike Simon, Cannae has no commitment whatsoever to CoreLogic. It can walk away tomorrow without consequences. CoreLogic investors are now playing for the last buck or two in this situation. Merger arbitrage is a tough racket, something I did for years at several hedge funds.

My advice: If you have stock in CoreLogic, take the money and run.

CoreLogic Raises Guidance and Gets an Unsolicited Offer. What Happens Next? @themotleyfool #stocks $CLGX $FNFV $CNNE Next Article
Current