Please ensure Javascript is enabled for purposes of website accessibility
Log In Help Join The Motley Fool
Free Article Join Over 1 Million Premium Members And Get More In-Depth Stock Guidance and Research
By Bram Berkowitz – Jul 8, 2020 at 8:51AM

While both banks have heavy commercial exposure, the merger is a natural progression and could create a much more attractive franchise.

Despite the coronavirus pandemic and lots of economic uncertainty, Dime Community Bancshares (DCOM) and Bridge Bancorp (BDGE) are pressing ahead with a planned merger of equals that will create an $11 billion asset bank in New York, stretching from the Hamptons to Manhattan.

The all-stock deal will see Bridge Bancorp issue 0.648 of Bridge shares for every Dime share. That gives the merger an implied value of roughly $489 million, or $14.80 per Dime share based on Bridge's stock price on June 30 . Although Bridge is issuing the new shares to Dime, the surviving entity will continue under the Dime Community Bank brand and will trade under the ticker DCOM. The deal is slated to close in the first quarter of 2021.

The big question: Is it a good move right now? 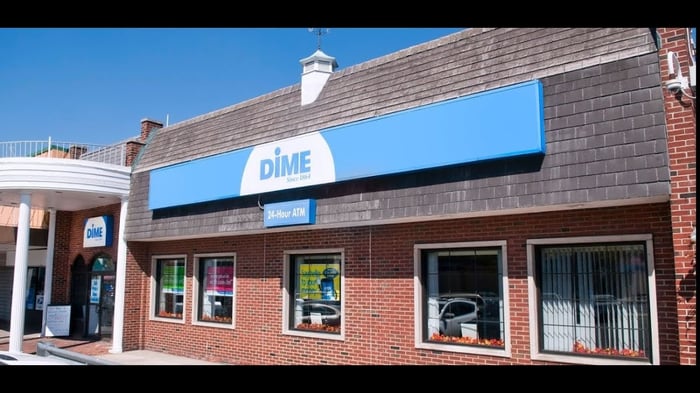 As Dime's current CEO Ken Mahon said on a call with investors after the deal, this is "a true merger of equals,"  and I think this is a fair assessment. Bridge has about $5 billion of total assets, while Dime has about $6.3 billion. Both are heavy commercial players and essentially operate right next to each other.

As you can see above, Dime is heavily based in New York City, while most of Bridge's footprint is on Long Island. The two overlap somewhat in Nassau County and New York City, but not by much. These bordering markets make the merger a natural expansion for both. The deal also now gives the combined entity the No. 1 deposit market share in Greater Long Island .

The geographic setup comes with positives and negatives. Because there's not a ton of overlap, there's not much opportunity for cost savings through branch closures. Executives said they currently have no closures planned . Total cost savings from the deal are expected to be about 15% of the combined noninterest expense base, or roughly $32 million. That's not bad -- but it's also not amazing when you consider merger and integration costs are expected to reach $60 million .

On the flip side, there isn't a lot of customer overlap, creating an opportunity to serve existing customers and attract new ones in ways the institutions couldn't before the deal. "Increased size and scale cannot be scoffed at," Bridge Bancorp President and CEO Kevin O'Connor said on the call .

The merger would be immediately accretive to Bridge's tangible book value (TBV) by 0.4% . That's not always so common for mergers or acquisitions, which can be dilutive to TBV and then require the acquiring company to earn back the lost value over time. For instance, when First Horizon National Corp (FHN 0.35%) and IBERIABANK announced their recent merger of equals to create a $75 billion asset bank in November of 2019, the deal was expected to immediately erode the pro forma institution's TBV by 5%.

Furthermore, the deal is expected to be accretive to Bridge's and Dime's earnings per share by 7% and 40%, respectively, by 2021 . The combined entity is expected to produce an efficiency ratio of roughly 50% (the efficiency ratio is a measure of a bank's expenses as a percentage of its revenue, and the lower it is, the better). That would be an improvement from Dime's 57.58% efficiency ratio at the end of the first quarter and Bridge's 58.74% .

Mahon also said on the call that he thinks the combined entity can achieve a return on assets -- a measure of how well a company is using assets to generate earnings -- of 1.25% to 1.3% . That would be a step up from what both banks are currently doing, especially at Dime, where the return on average assets was only 0.54% at the end of 2019. One percent is usually considered good in the industry .

While these are all just projections and not guarantees, they show how the combined entity could use scale to create profitability metrics they likely couldn't achieve on their own in the short term.

Given that both banks are almost entirely composed of commercial and multifamily loans, these are undoubtedly riskier banks right now. Commercial real estate and businesses have been heavily impacted by shelter-in-place orders during the second quarter, and many tenants have put off paying rent. The pandemic hit New York City early and hard.

But the merger will help create a more diversified portfolio. On its own, Dime has more than 60% of its loans tied up in multifamily housing. Multifamily loans make up about 44% of the new combined portfolio. Bridge, on the other hand, will shrink its exposure to commercial and industrial loans. The deal also decreases Dime's percentage of commercial real estate loans to total risk-based capital from 556% alone to 512% -- still extremely high, but trending in the right direction . Executives think they can eventually get this ratio below 500% . 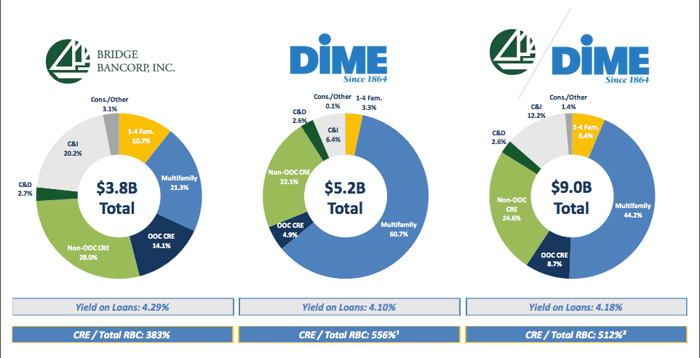 Executives also expect to maintain healthy capital levels despite taking a credit mark of 2.1% of gross loans , which essentially measures the percentage of loans in an acquisition or merger that have experienced credit deterioration. However, executives noted that this measurement was calculated under a very conservative assumption of a U-shaped recovery with significant stress on pandemic-impacted industries stretching late into 2021 .

The combined bank will also have about 24% of its deposits in noninterest-bearing deposits.  Executives would like to eventually push past 30%. Hopefully, some of the attractive qualities behind Bridge's franchise can combine with the long-standing Dime brand and its foothold in New York City to keep improving the company's overall profitability.

These two banks obviously present some substantial risk given the sectors they operate in and the uncertainty in the economy, which could draw scrutiny from regulators.

Still, I like the strategic vision of the deal. Furthermore, I think this deal makes sense in the long term when you consider how consolidation has been trending and how the larger banks have outpaced the rest of the industry. I also don't see a lot of added risk from these banks working as one versus operating separately. If the two banks can complete the merger on time and losses don't suddenly rise significantly, I think this deal can work in the long run.

Why Shares of Bridge Bancorp Fell 20.8% in July