This Tesla competitor just signaled how it plans to familiarize customers with its high-end sedan.

Taking a page out of the Tesla (TSLA -3.21%) playbook, Lucid Motors plans on offering its luxury electric vehicle (EV), the Lucid Air, through a direct-to-consumer model. Today, the company provided insight into the initial stages of this plan for North America: By the end of 2021, Lucid Motors intends to open 20 retail locations, otherwise known as Lucid Studios, and Service Centers. While the company did not identify the sites of all 20 locations, it did reveal that, of the first Lucid Studios to appear, five will be in California, two in Florida, and one each in New York and Virginia.

Speaking to the innovative approach of acquainting customers with its brand, Peter Rawlinson, CEO and CTO of the company, said that "Just as the Lucid Air is meticulously designed and engineered to be a new benchmark in the luxury electric car segment, we designed Lucid Studios to be engaging, to start conversations and to help educate people about the performance and efficiency benchmarks possible in an electric vehicle." 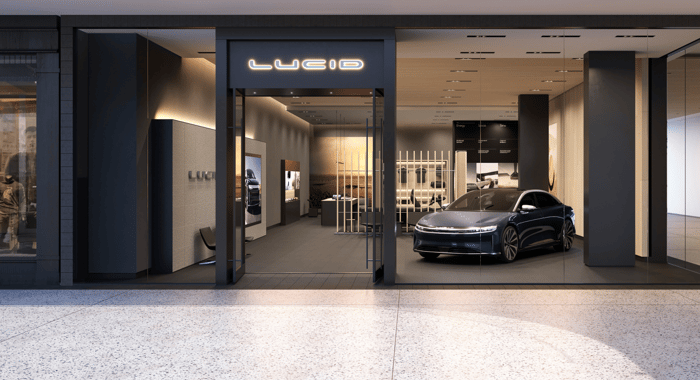 Establishing retail locations isn't the only avenue Lucid Motors is taking to better acquaint customers with its offerings; the company plans on launching a new website, through which potential car buyers can design their own car, in conjunction with the unveiling of the Lucid Air in September. Moreover, the Lucid app "will let customers communicate with the company on any topic, including servicing. And over-the-air updates will keep every Lucid Air's in-car technology up to date."