Amazon (NASDAQ:AMZN) Prime, the online retailer's subscription service that offers unlimited fast shipping and a slew of other perks, is wildly popular. The company had over 150 million Prime members globally at the beginning of this year, and it's likely that the pandemic has led even more consumers to turn to Amazon.

Some traditional retailers, including Walmart (NYSE:WMT) and Target, have fought back by offering free two-day shipping without any annual fees. But none have been able to offer a subscription service that has come close to threatening Amazon Prime. 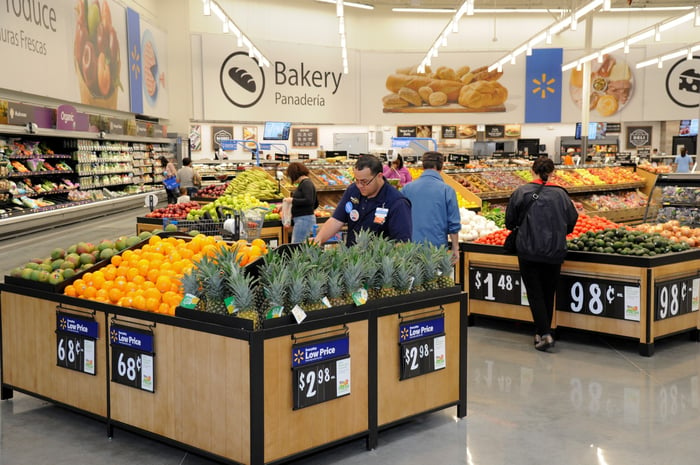 Back in February, Recode reported that Walmart was working on a membership service called Walmart+ that was aimed at combatting Amazon Prime. The core of Walmart+ would be free same-day grocery delivery, but the retailer was reportedly planning to pile on other perks as well. Walmart already offers a service called Delivery Unlimited for grocery delivery, and Walmart+ would effectively replace that with a service offering more value for customers.

Walmart was reportedly set to unveil the new service earlier this year, but the pandemic threw a wrench in those plans. Now, Recode is reporting that Walmart is planning to launch the service sometime in July. A Walmart spokesperson declined to comment to Recode, and it couldn't be learned whether the initial rollout would be nationwide.

Walmart+ will cost $98 per year. The service will include free same-day delivery of groceries and general merchandise from Walmart stores, discounts on fuel, early access to product deals, and limited two-hour delivery via Walmart's Express service. Walmart is also reportedly considering adding some sort of video entertainment to the membership. This could include a partnership with a major streaming company.

Grocery delivery will be Walmart's main weapon. While Amazon offers free grocery delivery from Whole Foods and through its Amazon Fresh service in some cities for Prime members, Walmart has far more locations than Whole Foods and substantially lower prices. Walmart+ will launch during a recession, at a time when consumers are turning to grocery delivery and pick-up services amid the pandemic. Low prices and wide availability could make Walmart+ a winner.

No one has been able to replicate Amazon's success with Prime. Amazon's unmatched selection and network of distribution centers makes it difficult to compete. But Walmart may have the upper hand when it comes to online grocery, and Walmart+ will make full use of that advantage.

In a survey in March, Gordon Haskett Research Advisors found 58% of all orders from new online grocery customers were going to Walmart, with Amazon capturing just 14% of orders. While Amazon has a huge head start on Walmart in general online retail, that's not the case when it comes to online grocery.

While Amazon Prime is likely to remain popular among consumers, Walmart has a good chance of finding success with Walmart+.