After only being allowed to operate with takeout and delivery for three months, restaurants in many states are beginning to reopen with dine-in seating as long as social distancing is observed.

That will limit how many consumers can be accommodated, but some business is better than none. Yet it still might not be enough for many to survive. 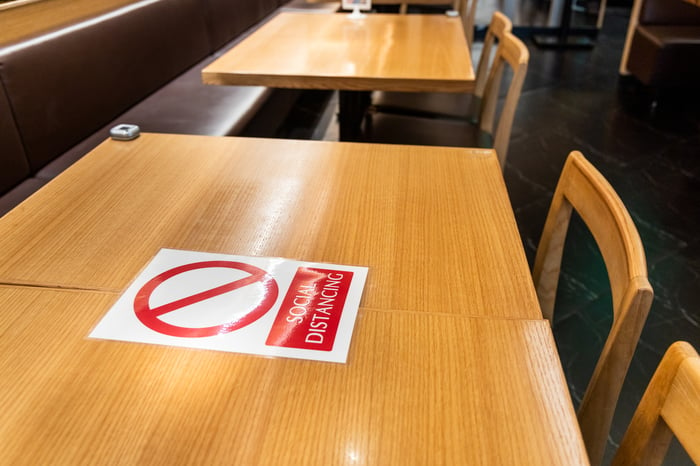 A tale of two restaurants

Darden Restaurants (NYSE:DRI), which operates a multitude of popular casual dining chains, highlighted during its recent earnings conference call the challenge restaurants face as they begin to allow diners back inside.

Darden's Longhorn Steakhouse chain saw considerable comparable restaurant sales improvement when sit-down dining was allowed beginning in early June. While overall comps were still down by 20% or more over the first three weeks of the month, locations that had at least some sit-down dining capacity for those weeks saw comps decline by just low teen percentage rates.

In contrast, its Olive Garden concept had overall comp declines of around 30% or so, but when dine-in seating was allowed, sales still fell by low- to mid-20% rates.

Considering both restaurants are casual dining chains, seemingly there should not have been such a stark difference, but Darden says they are butting up not only against capacity limitations, or how many customers they can allow into a restaurant, a challenge they're always facing in some respect, but now they must also abide by social distancing rules and that means restaurants may not post positive comparable sales for a very long time.

As Darden president and CEO Gene Lee told analysts, "Once you're past 25% occupancy, the only thing that matters is there's six feet of social distancing required...social distancing trumps any other restriction there is, because you can't get to 50%."

It turns out restaurant design is a huge factor in whether a location can make gains. Darden discovered that Longhorn's open design -- it says it's basically one big room that uses dividers to creates spaces within -- played a big role in its better results.

Olive Garden, on the other hand, doesn't have the same flexibility because its interior design is all at a lower level, about just four feet high, so Darden needs to approach dine-in seating differently and it is experimenting with installing Plexiglas barriers to create the necessary social distancing.

Other restaurants may find they also butt up against the inflexibility of their interiors and the immovable requirements of maintaining six-foot distancing. Even Darden is having trouble with its other, smaller chains.

It also operates the high-end Capital Grill and Eddie V's concepts, along with more casual fare at Cheddar's, Yard House, Seasons 52, and Bahama Breeze. Darden is hoping it will be able manage capacity constraints and social distancing protocols to open at least one of each of the restaurants.

While a good number of restaurants were able to hang on during the pandemic because of their takeout menus, some like Dave & Buster's (NASDAQ:PLAY) and Ruth's Hospitality (NASDAQ:RUTH) have been closed down because they had no to-go option available.

An entertainment-themed chain and a high-end steakhouse are largely predicated on the experience of being in the restaurant. It's part of why kids-oriented entertainment chain Chuck E. Cheese just declared bankruptcy.

So even upon reopening their dining rooms, many restaurants may find the one-two punch of limited capacity and proximity mandates are too much to overcome. Add in a rising second wave of COVID-19 cases that are causing some states to rethink their reopening policies, along with new, higher minimum wages laws that went into effect on July 1, and the deck may be stacked against the restaurants.

Darden Restaurants might be able to escape the ravages of the pandemic, but the next development we seem may be a new wave of bankruptcies swamping the industry.