As the chart below shows, shares fell sharply in March as the pandemic hit, but the stock has stayed down since then, while the broad market has recovered. 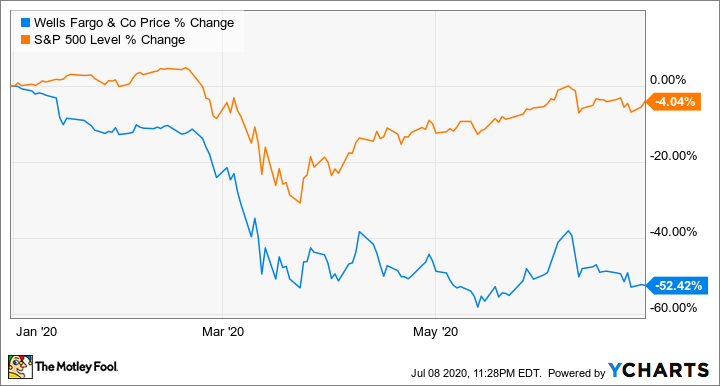 Wells Fargo, the nation's No. 4 bank by assets, got off to a weak start as shares fell after its fourth-quarter earnings report came out. The stock slipped 5% on Jan. 14 when results were worse than expected. Adjusted earnings per share of $0.93, which excluded $0.33 per share in litigation charges related to the retail banking scandal, were down from $1.21 in the quarter a year ago, and missed estimates of $1.12. Lower interest rates also weighed on net interest income, which fell from $12.6 billion to $11.2 billion.

The stock then unraveled in March as fears of the pandemic rose and the Federal Reserve slashed the fed funds rate to near zero, further impacting net interest income. Wells fell more than its banking peers as investors believed it to be more at risk of bad loans and a potential dividend cut.

The stock slipped again on its first-quarter earnings report in April, falling 4% as it missed estimates and added $3.1 billion in loan loss reserves. The company reported EPS of just $0.01, compared to expectations of $0.33.

Wells shares started to rebound in May as the economic reopening started to take shape but then pulled back as coronavirus infections ramped up again. Toward the end of June, the company said that it would have to cut its dividend in the third quarter in response to the Federal Reserve's stress tests, and it saw a larger loan loss reserve in the second quarter than in the first.

Like other banking stocks, Wells Fargo is highly dependent on the health of the overall economy, which means it is likely to struggle as the reopenings have slowed down while new cases have spiked. The bank has already pulled back from a number of loan types, including home equity, student loans, and loans to independent car dealers, as it looks to shore up its business.

With a dividend cut coming and the pandemic still flaring, it looks like investors will have to wait on a recovery.