The stock market bounced back on Friday with a vengeance, taking heart from positive news on potential coronavirus treatment options that investors hope will put an end to the pandemic sooner rather than later. The Dow Jones Industrial Average (DJINDICES:^DJI) saw the biggest gains on a percentage basis, but the S&P 500 (SNPINDEX:^GSPC) also climbed more than 1%, and the Nasdaq Composite set a new record high.

Some of the stocks that did best today were those that have taken the most damage from the coronavirus crisis. Carnival (NYSE:CCL) had good news for those following the beleaguered cruise ship industry. Elsewhere in travel, airline giant United Airlines Holdings (NASDAQ:UAL) also achieved an important milestone in its efforts to cut costs and reduce the rate at which it's burning through available capital.

Carnival shares rose 11% on Friday. Investors reacted optimistically overall to a business update that the cruise giant issued, even though the fundamental news about the company was mixed.

On the positive side, Carnival has seen a considerable volume of new bookings for 2021 cruises come in. Even with reduced spending on marketing and sales support, about 60% of Carnival's activity in the first three weeks of June came from new bookings. Cumulative advance bookings for 2021 are within historical ranges, with prices down only by low- to mid-single digit percentages. 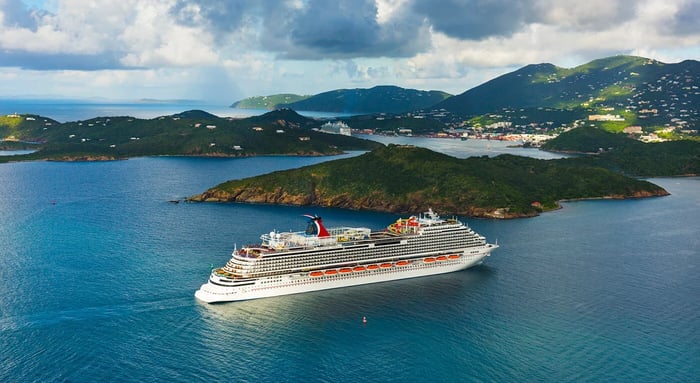 However, Carnival also took dramatic action to cut costs. The cruise ship operator plans to dispose of 13 ships, reducing its overall capacity by 9%. In addition, Carnival will defer delivery on new ships that it had previously ordered.

Carnival hasn't been able to reduce its cash burn rate as much as it had wanted to, as it projected continued net spending of around $650 million per month in the second half of 2020. That makes the $10 billion that Carnival has recently raised crucial, but the company also needs to root for falling instances of COVID-19 cases to help reopen the seas for the cruise line.

United Airlines Holdings finished the day up 8%, leading all major carriers higher. The company made important progress in figuring out how it will operate in the long run by making a crucial deal with a key group of employees.

United has been working with its pilots to come up with ways to adapt to reduced traffic and capacity, and late Thursday, the airline and the union representing pilots reached a tentative agreement in collective bargaining. In general, the agreement includes provisions that will govern what power United has to impose involuntary furloughs on pilots. It will also offer early retirement packages for those pilots who choose to leave United before the retirement age of 65 that's mandated under federal law.

One problem is that United has lost some flexibility in laying off employees by accepting federal aid. Under the terms of the government assistance United took, the airline can't lay people off until the beginning of October. Concessions won in the agreement should make things easier for United, although it likely won't prevent future job cuts entirely.

Airline stocks have been highly volatile, rising and falling as different news paints different pictures of the current financial situation in the industry. Unfortunately, those big moves are likely to continue for the foreseeable future as long as COVID-19-related uncertainty persists.