A popular bakery chain is giving away coffee this summer. Consumers are sometimes the only winners in a price war.

There's a price war on java this summer, and that isn't good news if you're Starbucks (SBUX 1.72%), Dunkin' Brands Group (DNKN), or any other chain that counts on coffee to drum up sales in the morning. The culprit here is Panera Bread, the popular bakery chain that may have fallen off of most investing radars after being acquired in 2017 by privately held JAB Holding.

Panera introduced a beverage subscription service earlier this year, charging $8.99 a month for unlimited drip hot coffee, hot tea, and iced coffee drinks. A subscriber can have a free beverage every two hours, along with free in-store refills. The timing was lousy for the MyPanera+ Coffee subscription launch. It rolled out in late February, just as the country was starting to hunker down for the pandemic crisis. The flow of morning commuters and classroom carpools never materialized. In a brazen move, Panera decided two weeks ago to make the platform free through Sept. 7. There is no additional purchase required, so for the next two months folks know that they are a painless app signup away from unlimited free coffee. If you're a Starbucks or Dunkin' Brands investor and you're not nervous, you may want to get caffeinated and wake up to how this summer is going to play out. 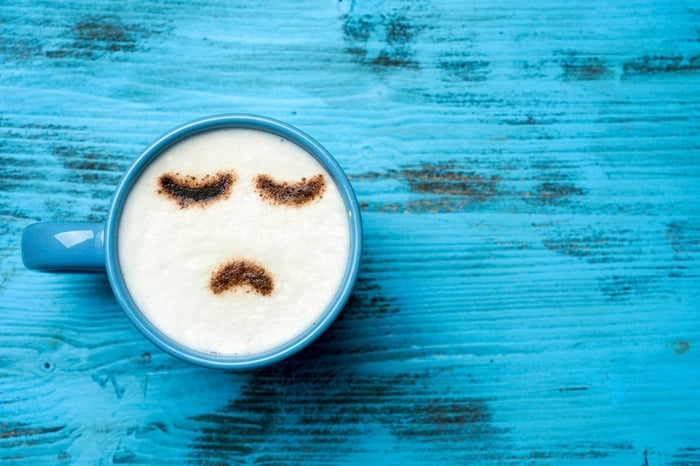 Panera didn't exactly plant the flag on aggressive coffee promotions. Restaurant Brands International's (QSR 0.13%) Burger King introduced a coffee subscription program 16 months ago, charging members $5 a month for access to a small coffee every day at no additional cost. The BK Cafe subscription was gunning for Starbucks from the start. The initial promo pointed out how a month of BK brews would cost as much as a large cappuccino from your local Starbucks location.

Restaurant Brands International's heart was in the right place, but the program didn't seem to gain much traction beyond the initial headline buzz. Panera's approach this year seemed destined to suffer a similar fate, but heads turned when it launched a social media campaign in mid-June. If it would receive 500,000 votes in favor of offering free coffee it would take down the paywall for the summer.

Starbucks and Dunkin' Brands don't necessarily see Panera Bread as an enemy, but with unemployment rates spiking and a recession under way will young consumers really look a gift coffee pot in the mouth? COVID-19 is obviously not doing chains any favors.

Starbucks saw a 10% drop in comps worldwide during the first quarter, and things will only get worse when it reports second-quarter results later this month. Dunkin' Brands recently revealed that it suffered a 23% slide in comps at Dunkin' Donuts through the first eight weeks of the second quarter.

There's no denying the appeal of Starbucks and Dunkin' Donuts, but with morning job and class commutes thinning out in the new normal, bouncing back won't be easy. Now that Panera is offering free drip coffee and tea to anyone who knows how to fire up a mobile app, there is even less reason to swing by Starbucks or Dunkin' in the morning.

You may be one of the 19.4 million active Starbucks Rewards members or a big fan of Dunkin's sugary treats but times are scary, money's tight, and -- well -- have you had a Panera orange scone or lemon drop cookie?

Panera is obviously hoping that folks will be doing more than grabbing free beverages at its stores every couple of house. It's hoping that subscribers will reward the chain by tacking on items that they will actually pay for (even if it's not required). At the end of the day the value proposition of coffee has been disrupted. It's a jarring move, especially since Panera parent JAB Holding also operates other coffee house and bakery concepts.

At the end of the day this is a war on coffee that no one -- and definitely not Starbucks or Dunkin' Brands -- will win. With value propositions rattled you may want to consider other consumer discretionary stocks for your investing dollar until we see this battle play itself out.