Shares of the coronavirus vaccine maker are up 276% this year.

Shares of Moderna (MRNA 0.15%) have more than tripled so far this year as the biotech has quickly pushed its coronavirus vaccine, mRNA-1273, through the clinical trial process. 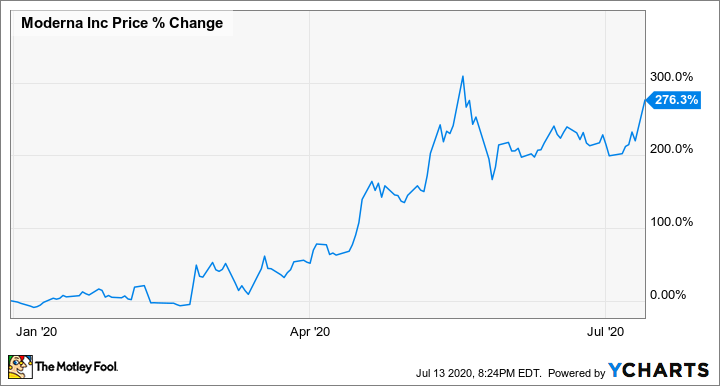 Whether shares of Moderna can go even higher from here depends on multiple factors, some of which are out of the company's control.

Let's break them down, one by one.

Will mRNA-1273 get through clinical trials and eventually gain regulatory approval?

Early trial data suggests mRNA-1273 is likely to create antibodies against SARS-CoV-2, the novel coronavirus that causes COVID-19. Whether those antibodies will protect patients from SARS-CoV-2 remains to be seen. There's also the possibility that a rare side effect could be revealed when Moderna tests the vaccine in a larger clinical trial.

While the chance of an efficacy failure or a clinical-trial-ending side effect is low, investors should still factor the possibility of a catastrophic event into their valuations, especially considering that shares of Moderna have a long way to fall back to their pre-COVID-19 days.

What will Moderna charge for mRNA-1273?

The vaccine's price is unknown at this point, but we can take an educated guess based on the $9.40 to $59.53 price tag that the Centers for Medicare & Medicaid Services pays for the seasonal influenza vaccine, which is 95% of the average wholesale price.

Given the need for two doses and that the vaccination is likely to have a higher compliance rate compared to the influenza vaccine, a $10 to $20 price tag, near the low end of the cost for the annual flu vaccine, seems like a reasonable guess.

How many doses of mRNA-1273 can Moderna manufacture?

Moderna plans to produce 500 million doses per year with the possibility of increasing the output to 1 billion starting in 2021. 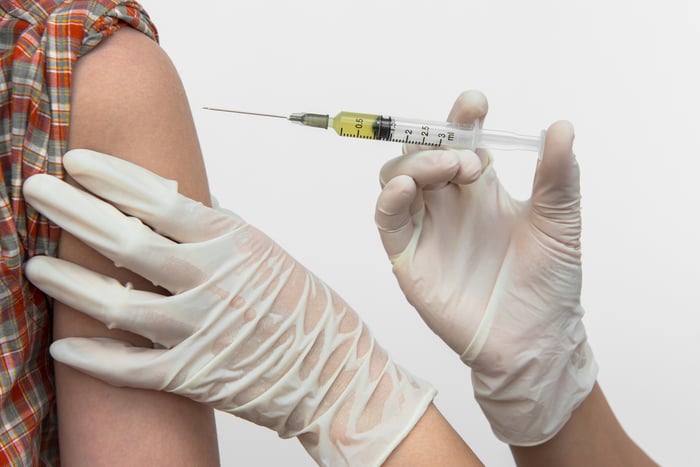 How much of the market will mRNA-1273 capture?

Unfortunately, Moderna's market share is largely outside the company's control. The biotech has lots of competition, including from fellow messenger RNA (mRNA) company BioNTech (BNTX 0.96%), which posted positive initial data for its COVID-19 vaccine, BNT162b1, which has the backing of Pfizer (PFE -0.91%). Moderna also faces competition from other large pharmaceutical companies, such as AstraZeneca (AZN -0.13%) and Johnson & Johnson (JNJ -0.71%), that are also developing coronavirus vaccines.

The good news is that Moderna's competitors are likely to be supply constrained with their vaccines as well, so if mRNA-1273 works, but is inferior to its competitors, the vaccine will likely still be used, although the full 1 billion doses per year might not be needed.

Long-lasting immunity is a double-edged sword for Moderna. If mRNA-1273 protects patients from infection for many years, it will limit the potential sales to just one regimen (two doses) per patient.

While there are a lot of unknowns, here's the most reasonable, best-case scenario: mRNA-1273 is priced at $10 to $20 per dose, Moderna is able to produce and sell 1 billion doses per year, and the vaccine needs to be administered every year. Given those parameters, Moderna would be able to generate $10 billion to $20 billion in revenue each year. Assuming a price-to-sales ratio ranging from 5 to 7, the biotech would be worth $50 billion to $140 billion, offering substantial additional upside from the current valuation.

Alternatively, there are scenarios where, even if mRNA-1273 makes it to market, Moderna is overpriced at its current $27 billion market cap. For example, if mRNA-1273 is a one-and-done therapy and multiple competitors reach the market within a year of mRNA-1273 being approved by regulators, Moderna might only be able to sell 1.5 billion doses before the entire population is vaccinated. At $10 to $20 per dose, the hypothetical 1.5 billion doses would generate $15 billion to $30 billion in revenue (and less in actual profit). Even after adding in the valuation of the pipeline, which was $6.6 billion before the pandemic, there isn't much (if any) upside remaining from the current market cap under that scenario.

Whether Moderna is a good value at the current valuation mostly comes down to factors that are largely unknown and difficult to handicap. Given the lack of insight, investors should be careful not to invest too much into Moderna at this inflated market cap.