It may not be a home run, but PNC should be a hit for investors.

Banks are hit-or-miss investments right now, due to the state of the economy. But one bank you might want to take a swing at is PNC Financial Services (PNC -0.47%).

The nation's seventh-largest bank, with $433 billion in assets as of March 31, is down 36% on the year through Monday's close, which is in line with most other banks. But there have been some interesting developments with PNC that make it worth watching.

PNC made big news when it decided to sell off its $17 billion stake -- or 22% of the company -- in BlackRock, the world's largest asset management firm. It marked the end of a more than 25-year partnership between the two companies. 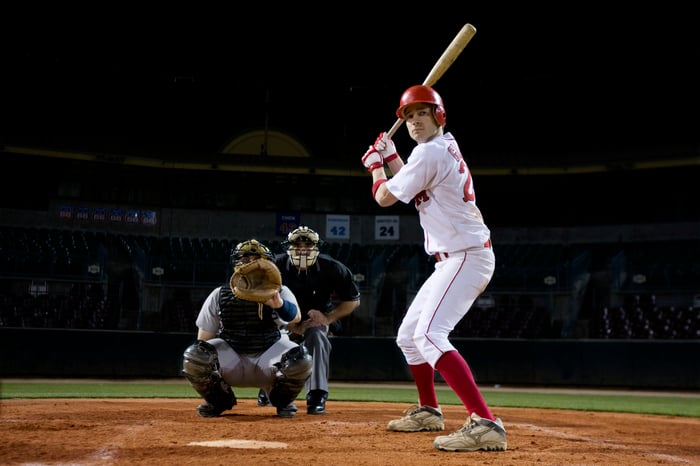 For PNC, the sale made sense for two major reasons. First, it gave the company much-needed added liquidity. Banks are hurting during this COVID-19-fueled recession and have had to set aside large amounts of money for expected credit losses. In the first quarter, PNC's provision for credit losses was $914 million, up 384% from the first quarter of 2019. It was the primary reason earnings were down 38% in the first quarter.

PNC had been on sound financial footing even before the divestment of BlackRock, as it performed well in the Federal Reserve's 2020 stress test, which was conducted before the BlackRock exit. In the Fed's hypothetical scenario of a severe economic downturn, PNC would still be well capitalized, with a common equity tier 1 ratio of 8.2%, which is well above the 4.5% minimum. It allowed PNC to maintain its $1.15 per share quarterly dividend -- one of the best dividends in the industry.

"We feel the time is now right to do just that, realizing a substantial return on our investment, significantly enhancing our already strong balance sheet and liquidity, and leaving PNC very well-positioned to take advantage of potential investment opportunities that history has shown can arise in disrupted markets," PNC Chairman, President, and CEO William Demchak said of the move.

That last part of his statement is the second major reason why this BlackRock move makes sense.

Right in their wheelhouse

As Demchak alludes to, the timing of this divestment is not only to cash out on a successful investment and add liquidity, but to make a bigger splash with an acquisition. Even before the pandemic, expectations for mergers and acquisitions activity were high, given the low-interest-rate environment. Now, it's even more so with interest rates at 0% and the country in recession. Some banks might be struggling and looking for a lifeline, while others see it as an opportunity to get bigger and add scale. PNC is among the latter, with plenty of possible targets among the former. Demchak confirmed that PNC is in the market in June, saying that PNC is looking to develop a national presence and boost its assets up to around $700 billion, at the right price, of course.

All signs point to PNC being a buy, given its great valuation -- trading at about 9.5 times earnings with a 0.96 price-to-book ratio -- its excellent liquidity, and, of course, its growth potential via acquisition. PNC has a good track record of making sound investments. In 2008, PNC acquired National City Bank for $7 billion less than its tangible book value. But even if no deal gets done, PNC is still a good buy, with an efficiency ratio of 56% (down from 60% a year ago) and more fee income than its large regional bank competitors from its asset management business.

Is PNC a home run for investors? Well, it is still a bank in a recession, so maybe just a ground-rule double -- but a hit, nonetheless.