Augmented and virtual reality (AR/VR) is still a small industry. According to tech researcher IDC, global spending on AR/VR was $10.5 billion in 2019. Although the coronavirus pandemic has cast some doubt on short-term outcomes, IDC was predicting late last year that there would be a surge in global AR/VR spending to some $18.8 billion in 2020. That would be some impressive growth if it panned out.

The problem is that there are few viable investment options in AR/VR that are pure-play companies. However, existing technologists are investing in the next-gen digital viewing format and should reap handsome rewards if it continues to take off. Three companies that are worth a look are Facebook (META -0.54%), Electronic Arts (EA -1.50%), and PTC (PTC -1.01%).

Facebook is one of the leaders of the AR/VR movement via its Oculus subsidiary, which it acquired back in 2014 for $2 billion. The Oculus Rift headset (which requires a PC) and the Quest headset (a freestanding unit) are best-known for video game and entertainment use, but the business world is also a fast-growing application. The Oculus for Business platform includes a Quest headset, helping organizations put together virtual training modules and build collaborative work environments. 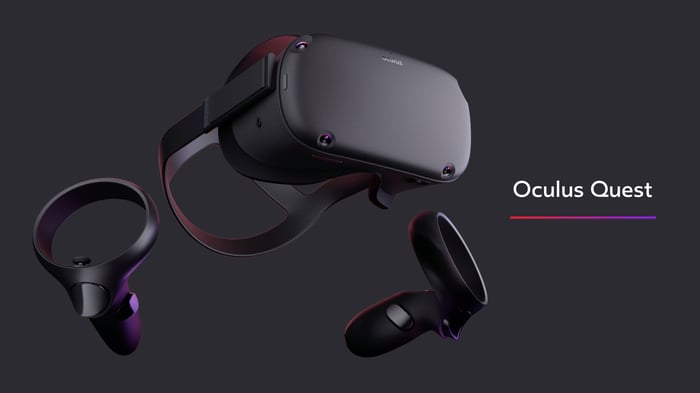 These types of commercial applications are where IDC thinks the biggest AR/VR growth lies. Facebook's well-developed ecosystem covering the entire process from software development to app store to device management puts it in prime position to capitalize on the opportunity. In fact, IDC thinks half of global AR/VR spending this year will be for commercial use and come close to surpassing virtual entertainment use for the first time. AR/VR training is expected to grow at a more-than-60% rate through 2023 and become the largest sub-segment of the industry.

However, though I think Facebook finds itself in a leadership position with Oculus, this social media giant is still very much an advertising company. In 2019, the "other" revenue segment (comprised mostly of Oculus results) grew 26% year over year and surpassed $1 billion in revenue for the first time. That accounts for a big slice of the overall AR/VR market, but it was still just shy of 1.5% of Facebook's total revenue (the rest of which came from ads).

But things are changing fast. The "other" segment reported an 80% surge in revenue to $297 million to kick off the first quarter of 2020, and is quickly approaching 2% of Facebook's total revenue. With video games and related device sales up this year due to shelter-in-place measures and business spending on new virtual tools, this is a promising segment that could help keep Facebook in growth mode and diversify its revenue stream over the long term.

Of course, while business use of AR/VR is the fastest-growing segment of the industry, let's not forget that video games got it all started and still make up roughly half of global industry spending. And while fully immersive gaming experiences are still the minority, that is changing as the technology progressively improves and game producers invest in the development of dedicated AR/VR titles. One of those companies is Electronic Arts.

EA already has a library of games that feature a VR mode, like those accessed via Sony's PlayStation VR or an Oculus headset. But investment in AR/VR game modes is picking up pace. EA has announced a handful of titles that were built from the ground up to be used with a virtual headset. And one of the biggest tests of this format is coming this autumn, with the October release of Star Wars: Squadrons.

As big as the Star Wars franchise may be, EA's game development licensing agreement with the space opera's parent company Disney is relatively small potatoes. EA pays the bills with its marquee entries for FIFA soccer and Madden NFL video games, as well as the Battlefield and Apex Legends franchises. Priced at $40 on release with the promise of no in-game microtransactions to further monetize gameplay over the long term, Star Wars: Squadrons will be one-third cheaper than a typical new video game. That hints at either low production costs, a short storyline, or both. What the budget-friendly game means for EA's financials remains to be seen.

Nevertheless, just as last year's Star Wars Jedi: Fallen Order sold very well and laid down some new groundwork for what is required of the sci-fi entertainment epic, so too could Squadrons set a new bar for AR/VR gaming. Players will be able to fully immerse in a VR experience for the game in its entirety -- apparently both in the single-player story mode and online multiplayer mode. If it helps more consumers embrace VR, the new game could be a springboard for EA into the virtual entertainment space.

Let's shift back to commercial AR/VR use for this last pick, by way of industrial technologist PTC. The company's suite of software helps industrial and manufacturing companies (like those specializing in healthcare equipment, automotive, and aerospace outfits) make digital transformation. Often referred to as industry 4.0, today's manufacturing demand is being driven by automation via robotics, network connectivity to supply real-time data and equipment monitoring, and product design simulation and collaboration. That last piece of the puzzle is where AR/VR comes in.

The bulk of PTC's revenue is derived from its core design and product management software, which made up 70% of total revenue during the quarter ended in March 2020 and grew 10% compared with a year ago. However, the company's "growth" segment, which includes industrial Internet of Things and augmented reality offerings, grew annual recurring revenue by 30% in the period and made up 15% of the total.

PTC expects this area to remain a double-digit percentage growth concern for the next few years as its customers adapt to the new digital-first reality we find ourselves in. Whether it's new ways to remotely collaborate in the workplace, 3D simulation of product design, or virtual training modules, PTC's AR platform is helping industrial companies pivot to a new normal and optimize operations for better flexibility and profitability.

With a market cap of just $9 billion, PTC is by far the smallest stock on this list. However, its reliance on AR applications makes it the most concentrated on the advancement of the technology and could have the most to gain if commercial use of AR/VR ramps up in grand style like IDC predicts it will. Thus, for those looking to invest in virtual and augmented reality, PTC is worth a serious look right now.