Please ensure Javascript is enabled for purposes of website accessibility
Log In Help Join The Motley Fool
Free Article Join Over 1 Million Premium Members And Get More In-Depth Stock Guidance and Research
By Adam Levy – Jul 16, 2020 at 9:45AM

A physical shopping cart could be the ticket to billions in service revenue.

Earlier this year, Amazon (AMZN -3.01%) started offering its Just Walkout technology as a service for other stores. The technology allows shoppers to grab anything they want off store shelves and automatically pay for it as they walk out the door.

One reason retailers may hesitate is there's a big upfront cost to installing the technology in their stores. Amazon reportedly spends $1 million on technology for its small-format Go stores. Supermarkets range between 10- and 20-times bigger than the average Go store, which means more technology and more complexity.

Amazon may have developed a solution for larger stores. It recently introduced the Dash Cart, which will roll out at its new Woodland Hills, California grocery store later this year. It uses cameras, scales, and a small computer embedded in the cart to offer a Just Walkout experience similar to the full system installed at Amazon Go stores.

There are still improvements to be made, and the ability to test carts at its own grocery stores could be instrumental to Amazon scaling the product and service with other retailers. The potential pay off could be huge. 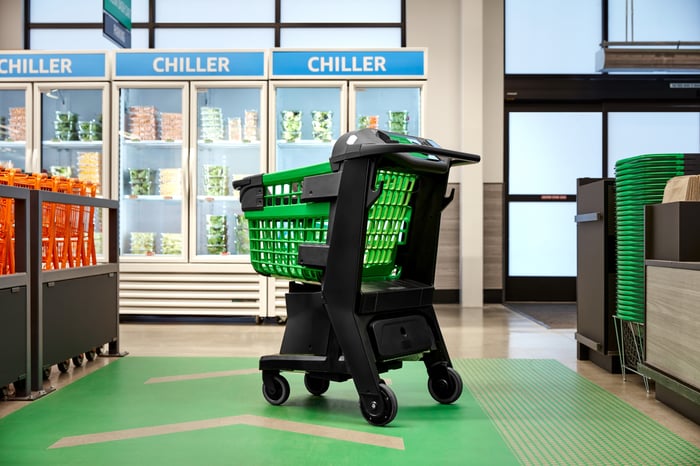 Amazon will be its own customer first

Amazon has a history of developing products and services for its own needs and then offering them to others. Amazon Web Services (cloud computing) and Fulfillment by Amazon (warehousing and logistics) are two massive products that fit that playbook.

Amazon's intent on building out its own retail business using Just Walkout technology. It reportedly plans to expand the Amazon Go store format to 3,000 locations. Additionally, its plan to introduce Dash Carts at the new Woodland Hills store may mean it intends to use the carts at other stores within the brand or possibly expand to Whole Foods locations.

With a guaranteed customer -- itself -- Amazon can acquire real world data to show how the technology impacts sales and other shopper metrics. It can get feedback on what parts of the product need improvement. And it can quickly scale production and leverage the underlying technology, so it can offer it to other retailers for less. After all, Amazon isn't the only company working on a smart shopping cart.

Completely displacing cashiers is a $50 billion value proposition, Loup Ventures Andrew Murphy suggested in 2018. In fact, Amazon could turn Just Walkout technology into tens of billions in incremental revenue by producing greater sales and lowering expenses for its retail partners.

Importantly, the service could benefit other services offered by Amazon. For one, it could increase the use of Amazon Web Services (AWS) by retailers. Amazon may not require retailers to use AWS for its Dash Carts or Just Walkout technology, but it'll certainly be the most convenient option. Many retailers may be inclined to consolidate their cloud-computing providers, moving all of their operations to AWS.

Another consideration is that Amazon may provide payment-processing services for retailers. The Dash Carts at Amazon's grocery stores will ask shoppers to scan their Amazon app to access payment information. Amazon may not go that far, but it could require retailers to use Amazon's payment-processing service to make the service work more smoothly. Considering Americans buy $700 billion worth of groceries every year, taking just a tiny cut of those sales would be a big business in itself for most companies.

There's also a lot of shopper data Amazon could get its hands on. Those data can be extremely valuable for product recommendations and advertising. Amazon is currently able to use data from Whole Foods shoppers for advertisements on surfaces like Fire TV, but that remains a small subset of users. Amazon may convince stores to share their shopper data by using its smart grocery carts to increase sales through in-store product recommendations, thus boosting sales.

Amazon's ability to get its technology into more stores could provide a significant boost of high-margin revenue for the company. Investors in the FAANG stock may still be waiting for Amazon to strike a deal with its first big retail partner, but in the meantime Amazon makes a pretty good customer for itself.