The company's results were in line with the overall market.

Ford Motor Company (F 7.76%) said that its sales in Europe fell by more than half in the second quarter, in line with the overall market, as the coronavirus outbreak shuttered dealers across the Continent and kept many European consumers at home.

But while April and May were especially challenging, Ford said, its sales recovery was well underway in June. Sales that month were 95% higher than they had been in May, thanks in part to the resiliency of its commercial-vehicles business, which is driven by large orders from fleets. Ford's commercial-vehicle sales were down just 40% in the quarter; its passenger-vehicle sales fell 56% from the second quarter of 2019.

Ford's Focus, which was discontinued in the U.S. last year, remains a strong seller in Europe. The European Focus, an all-new model launched in 2019, was the company's best-seller in the period with about 30,700 sold. The runner-up: the small Fiesta, another model no longer sold in the United States. 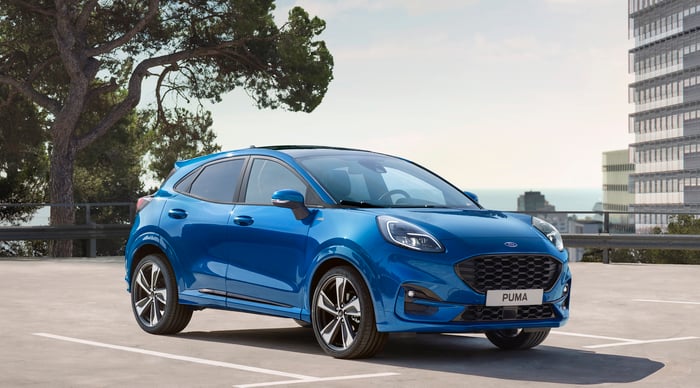 Ford's sporty Puma, launched in Europe last year, is a size smaller than the U.S. Escape. Sales have been strong since its debut. Image source: Ford Motor Company.

Ford's European marketing chief, Roelant de Waard, said in a statement that the company's two newest models, the Puma and the Kuga, are both off to strong starts.

Ford sold about 17,600 examples of the Puma, a small sporty SUV developed for Europe and launched last fall; sales of the Kuga, the European version of Ford's all-new Escape, totaled about 13,000 with a plug-in hybrid version accounting for just over half of those, de Waard said.

Ford is scheduled to report its second-quarter earnings results after the market closes on July 30.