The new plug-in Escape matches up well with its chief rival.

Shares of Ford Motor (F -1.39%) were trading higher on Monday after the company revealed a new plug-in hybrid version of its Escape SUV that outpaces a key competitor from Toyota (TM -1.15%).

Ford said that its new plug-in hybrid (PHEV) Escape will have an EPA-estimated electric fuel economy rating of 100 MPGe and a starting price of $34,285.  Both of those numbers were better than the figures for the SUV's likely chief rival, the upcoming PHEV Toyota RAV4 Prime, which will have an estimated 94 MPGe and a starting price of just over $39,000. 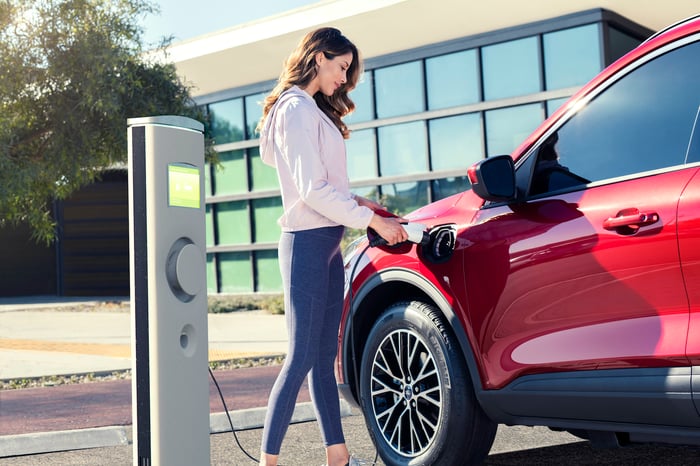 The RAV4 Prime is no slouch, though. It will have slightly more electric-only range than the Escape -- 42 miles versus 37 miles -- and more power, with a whopping (by compact SUV standards, anyway) 302 horsepower to the Escape's more pedestrian 209.

But we should note that those differences reflect different choices by the manufacturers, not a meaningful technology gap in either direction. The takeaway for investors: The new PHEV Escape should find plenty of interested buyers when it arrives at dealers later this year.

The Escape PHEV is just one of a slew of new vehicles that Ford plans to launch over the next few quarters. Later this month, in an event eagerly awaited by auto investors, Ford will reveal the all-new 2021 F-150 pickup -- followed by a brand-new Bronco SUV in early July.