One way for cannabis companies to easily grow their sales is by expanding into new markets. And one new market that's been performing exceptionally well thus far in 2020 is Illinois. The legal pot market in Illinois opened Jan. 1, and sales totaled $39.2 million in that first month. In May, revenue topped $44.3 million to hit a new record, and then in June it reached another high of $47.6 million.

The market's proving to be a hot one, and that could mean big things for a couple of pot stocks.

2 cannabis companies that could dominate in 2020

It can be difficult to gauge whether a company will report strong sales in its quarterly results. However, indicators like state-specific sales can offer clues as to which companies could be due for good performances.

With the recreational cannabis market in Illinois doing well this year, it could mean a big year for two Chicago-based pot stocks: Cresco Labs (OTC:CRLBF) and Green Thumb Industries (OTC:GTBIF). 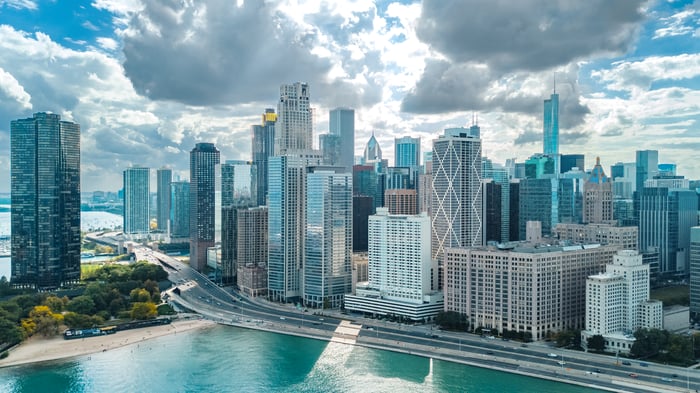 Green Thumb operates seven dispensaries in its home state: two under its 3C Compassionate Care brand and another five under its more popular Rise brand of retail stores.

On July 13, Cresco announced it was opening its eighth dispensary in Illinois, all of which are under its Sunnyside brand. It also has plans to open a ninth store in the near future.

With strong market penetration in Illinois and the market continuing to grow, both of these companies could get a big boost from their home state this year.

How their sales numbers look today

In Cresco's first-quarter 2020 results, released May 28, the pot producer reported sales of $66.4 million -- a new quarterly record for the company. Cresco attributes that sales growth in part to the success it's enjoyed in the Illinois market. Q1 sales were up 60% from the previous quarter and were more than triple the prior period's tally of $21.1 million.

Green Thumb's generated even more sales. In its Q1 results released May 14, the company's sales totaled $102.6 million, nearly five times the $27.9 million it reported a year earlier. Neither company currently breaks out revenue on a per-state basis on its financials.

Green Thumb currently operates in 12 states across the U.S. , while Cresco is active in nine.

Which of these stocks is the better buy right now?

With strong sales growth, especially in the Illinois pot market, likely to spur even more revenue growth for Cresco and Green Thumb, these two stocks that could take off this year, especially as other cannabis companies struggle. By expanding their reach into new markets, these businesses are also establishing themselves as industry leaders. Overall, there's a lot for growth investors to like about these two stocks.

But before deciding which pot stock is the better buy, let's take a look at how these stocks are performing thus far in 2020 against one another and the Horizons Marijuana Life Sciences ETF (OTC:HMLSF): 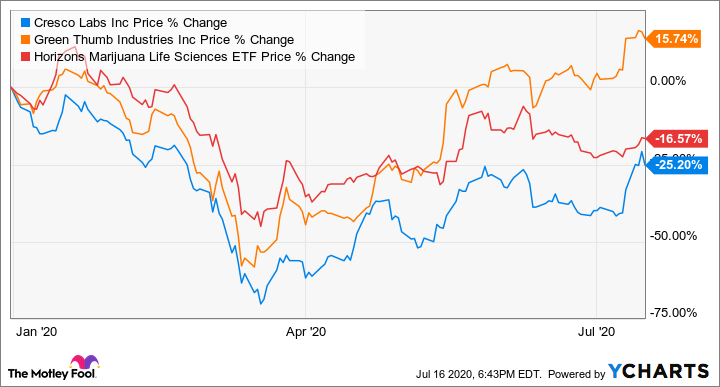 Although neither company has been able to stay out of the red over the past four quarters, with a stronger market presence and greater sales growth, Green Thumb has won over investors and outperformed both the Horizons ETF and Cresco by a wide margin this year.

However, Green Thumb is also the more expensive stock when comparing price-to-sales multiples: 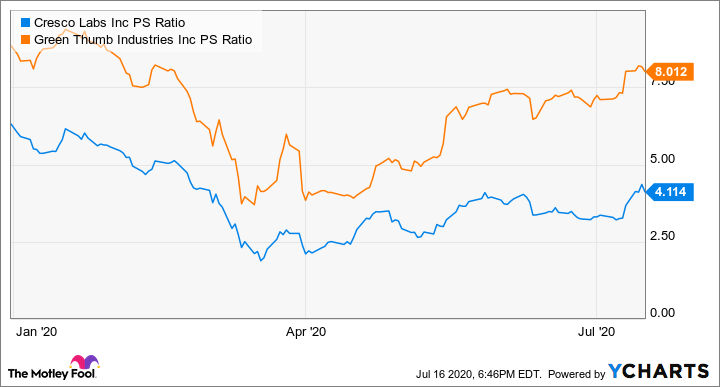 Overall, with stronger sales numbers and still plenty of room for more growth, Green Thumb is the stock I'd go with despite its higher valuation. After all, if it keeps on growing sales at a strong rate, that ratio will come down in time.