AstraZeneca reported good news on a vaccine candidate, Goldman Sachs upgraded its price target for Amazon, and an oil giant announced a strategic acquisition at what looks like a reasonable price.

Another day of positive results from a prospective coronavirus vaccine and an upgrade for a tech giant lifted the S&P 500 Index (^GSPC -1.03%) 27 points, or 0.8% on Monday. According to a report in a major medical journal, AstraZeneca's (AZN 0.46%) AZD1222 vaccine candidate reported positive results in an early stage trial, while the stock of Amazon (AMZN -8.43%) got a huge upgrade from analysts at Goldman Sachs (NYSE: GS), lifting shares of the $1.5 trillion company an incredible 8%.

We're also getting a big merger in the oil patch. Integrated oil giant Chevron (CVX 0.26%) is buying smaller producer Noble Energy (NBL) in a deal valued at $13 billion. This marks one of the first big deals since oil demand and prices crashed earlier this year, and offers evidence that executives still see value to be had in the oil patch. 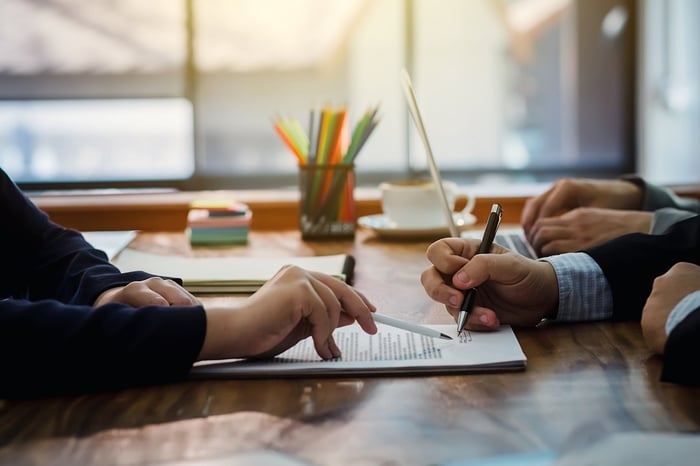 Vaccine prospects are another shot in the market's arm

AstraZeneca's vaccine candidate has emerged as one of the leaders in the race to demonstrate efficacy and safety. According to medical journal The Lancet, an early stage trial in just under 1,100 patients was very positive, with no serious adverse events (indicating risky side effects) and encouraging signs of antibodies that indicate a likely immune response to SARS-CoV-2 (the virus that causes COVID-19).

Phase 3 trials have started in three countries and are expected to begin in the U.S. soon, moving the prospective vaccine closer to what is hoped to be approval. With that said, it would take an emergency use authorization to bring any of the vaccines in clinical trials to market before late next year. Putting medicines through full trials takes multiple years in order to measure any potential long-term effects, so even a near-term solution would come with its own risks.

Amazon's upgrade is moving the market

Easily the biggest single event driving the market higher today was a Goldman Sachs analyst boosting his price target for Amazon stock 27%, to an incredible $3,800 per share. The analyst, Heath Terry, isn't the first close follower of the mega-cap tech giant to boost his price target. Analysts at MKM Partners and Jefferies have also moved their price targets for Amazon stock above $3,350.

Mega-caps lead index up when most stocks fell

Combined, these mega-cap stocks gained enough to offset the trajectory for most of the S&P 500. Fewer than 200 of the stocks in the S&P 500 index gained value today.

Is action in the oil patch setting the stage for a recovery?

Chevron's deal to acquire Noble Energy is notable for several reasons. First, it's one of the first big deals we have seen since oil demand and prices started to collapse in late February. Second, and maybe most notable, is that Chevron is, in essence, buying Noble for its oil assets, which make up the vast majority of the company's economic value.

The deal, which is worth $13 billion including Noble Energy's debt, values the company's stock at $5 billion. Chevron is paying with stock; Noble shareholders will get 0.1191 shares of Chevron in exchange for their current equity once the deal is approved and closes. Will it prove a good value? Well, Chevron's share price is down 29% year to date, while Noble stock is off 59% even after the 5.6% post-announcement pop. If oil prices can recover (and sustain themselves) above $60 per barrel, this acquisition will likely prove a bargain for Chevron.

Up next: earnings from Coke and United Airlines

Coca-Cola just announced a quarterly dividend that was increased from last year, but investors are bracing for what could be one of the worst quarters in company history. The company will drop earnings before trading on Tuesday, and the expectations are that earnings will fall 37% on average, on a 28% decline in sales. Half the company's revenue comes from food service, restaurants, entertainment venues, and other away-from-home outlets, and it hasn't replaced all those sales from people buying at supermarkets.

United shares fell today, joining most airline stocks in a down day. TSA traffic at key travel hubs fell slightly over the past week, increasing worries that the industry has a long road to a full recovery, and that not all the airlines are likely to survive in their current state. United recently notified 36,000 employees of possible furloughs, while Southwest announced 28% of its employees volunteered to accept either buyouts or extended leave packages. United is set to report earnings after trading closes on Tuesday, and will hold a conference call with investors on Wednesday.

These 2 FAANG Stocks Were in the Spotlight Tuesday

Looking for the Next Ten-Bagger? Focus on Market Share

A Once-in-a-Decade Investing Opportunity Is Here. Should You Buy Now?
413%