Please ensure Javascript is enabled for purposes of website accessibility
Log In Help Join The Motley Fool
Free Article Join Over 1 Million Premium Members And Get More In-Depth Stock Guidance and Research
By Leo Sun – Jul 23, 2020 at 10:30AM

Which unique food play is the better all-around investment?

Beyond Meat (BYND -4.39%) and Yum China (YUMC -0.83%) both emerged as unique plays in the saturated food market in recent years. Beyond Meat started selling plant-based meat products in 2013, and Yum China became a "pure play" on China's fast-food market after splitting with Yum! Brands in late 2016.

Yum China's stock rose more than 20% during the same period, even as it temporarily closed its restaurants during the coronavirus pandemic. Does that stability make Yum China a better overall investment than Beyond Meat?

Can Beyond Meat maintain its momentum?

Beyond Meat's revenue rose 170% in 2018, surged 239% in 2019, and climbed another 141% in the first quarter of 2020 as its domestic and international sales more than doubled. It didn't provide any guidance for the full year, due to the COVID-19 crisis, but analysts expect its revenue to rise 55%

Beyond Meat attributes most of its growth to partnerships with big restaurant chains and retailers like Yum! Brands' KFC, TGI Friday's, Subway, Starbucks, and Walmart. However, it's facing tougher competition from rivals like privately held Impossible Foods, which was valued at $4 billion after its last funding round, and Tyson Foods, which also entered the plant-based meat market last year.

Beyond Meat's net loss narrowed from $29.9 million in 2018 to $12.4 million in 2019. It also squeezed out a slim profit of $1.8 million in the first quarter of 2020. The bulls believe Beyond's profitability will improve as more people purchase its products, it secures more partners, and it expands its overseas footprint.

The bears believe Beyond will lose ground to its growing list of rivals, spend more money to stay relevant, and possibly lose partners if diners stop ordering plant-based meat products. Its revenue growth could decelerate this year, due to a slowdown in new partnerships and tough year-over-year comparisons, and the stock looks frothy at 18 times this year's projected sales.

Yum China expands as it recovers from COVID-19

Yum China's same-store sales rose 3% last quarter, featuring 4% growth at KFC and 1% growth at Pizza Hut in constant currency terms. But in the first quarter of 2020, Yum's same-store sales plunged 15% -- with a 11% drop at KFC and a 31% decline at Pizza Hut -- as lockdowns shuttered 35% of if its restaurants during the peak of the COVID-19 outbreak. It also temporarily suspended its buybacks and dividends. 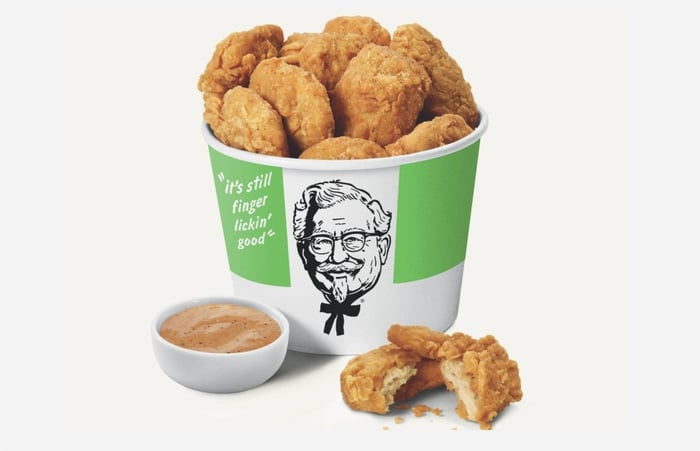 Yum didn't provide any guidance for the full year, but analysts expect its sales and earnings to drop 7% and 42%, respectively. That outlook seems dire, but Yum still plans to open up to 850 new stores this year. It also expects digital upgrades at its stores, improved delivery options, and the growth of smaller chains like Little Sheep, East Dawning, Taco Bell, and COFFii & JOY to buoy its long-term growth.

The bulls believe Yum China's slowdown is temporary, since it generated stable growth prior to the crisis and it's still opening new stores. Analysts anticipate double-digit revenue and earnings growth next year.

The bears will warn a second wave of COVID-19 infections could derail Yum China's fragile recovery, and its brands could face boycotts amid escalating tensions between the U.S. and China. The stock also isn't cheap at nearly 80 times forward earnings.

The better buy: Beyond Meat

Beyond Meat isn't a stock for queasy investors, but its breakneck revenue growth, improving profitability, and growing list of heavy-hitting partners are all tough to ignore. The stock isn't cheap, but its growth arguably justifies its premium valuation and makes it a compelling stock for investors who can stomach the risk.

Yum China is still a decent long-term investment, but its recovery is shaky, its valuation is high, and the suspension of its buybacks and dividends eliminates any reason to stick around -- especially when there are better fast food stocks and Chinese stocks to buy in this market.