Please ensure Javascript is enabled for purposes of website accessibility
Log In Help Join The Motley Fool
Free Article Join Over 1 Million Premium Members And Get More In-Depth Stock Guidance and Research
By Anders Bylund – Jul 23, 2020 at 8:19AM

The Japanese telecom is looking for a buyer and NVIDIA has reportedly thrown its hat into the ring.

Graphics chip designer NVIDIA (NVDA -0.36%) is looking into a buyout bid for processor architecture designer Arm, currently owned by Japanese telecom SoftBank (SFTB.Y -3.02%). Anonymous insiders talking to Bloomberg and CNBC said that NVIDIA has approached SoftBank with a proposal, though other buyers still have an opportunity to outbid NVIDIA.

Two weeks ago, SoftBank hired Goldman Sachs (GS -3.50%) to help the company find a buyer for Arm. SoftBank has also discussed a potential deal with Apple (AAPL -1.51%), but those talks were reportedly started by SoftBank and the iPhone maker wasn't really interested in Arm's technology licensing business.

Arm chips are found in nearly every modern smartphone and tablet, and Arm-based chips are also making their way into self-driving cars and data center equipment. Both Apple and NVIDIA design and make processors based on Arm's system architectures.

It's unclear whether NVIDIA wants to take over the entire Arm operation or a smaller piece of that business. If the talks don't lead to a deal, SoftBank might simply spin Arm out as a stand-alone business. Anticompetitive concerns may force SoftBank's hand into choosing the spinoff solution, given Arm's uniquely central role in the modern semiconductor industry. Any proposal from NVIDIA, Apple, or other tech-sector players would surely raise a whirlwind of complaints and lawsuits. 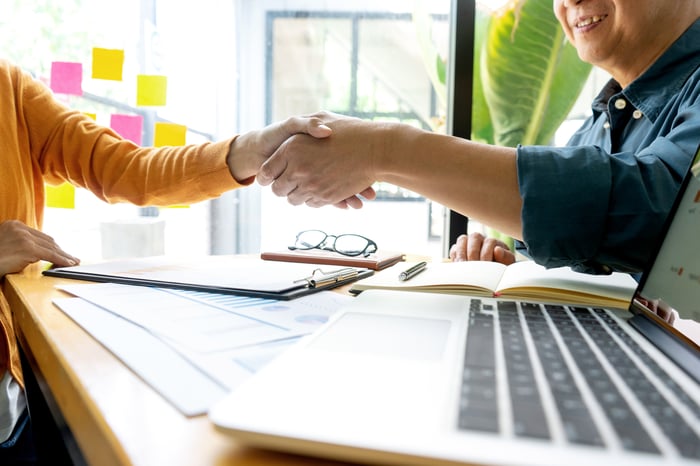 Whatever happens, SoftBank wants to pocket a generous sum of cash in exchange for the Arm business. The Japanese company bought the British semiconductor specialist for $32 billion in 2016 and expects to make a profit on the upcoming exit. The Philadelphia Semiconductor Index has nearly tripled in value during SoftBank's Arm ownership, so a deal in the neighborhood of $100 billion would not be out of the question.

NVIDIA only had $16 billion in cash equivalents at the end of April, but the company could structure a larger deal around stock-swap ideas and new debt. NVIDIA's $257 billion market cap can do a lot of the heavy lifting if SoftBank is ready to play ball.