The turnaround story is certainly compelling on the surface. After its clunky-but-comfortable shoes were all the rage in 2007, by 2009 the prospect of bankruptcy loomed large for footwear name Crocs (NASDAQ:CROX). The company managed to hang on until 2013 when a partnership with a private equity firm provided some much-needed cash. But the funky footwear name was never able to restore its previous glory.

That is, until 2018. Under the leadership of Andrew Rees, who was named CEO in 2017 after joining the company in 2014, Crocs has created an incredible resurgence. The next year was the best year ever for the company in terms of revenue, and 2019's numbers topped the prior year's records. The company successfully made ugly colored foam clogs cool again.

And there's the rub, so to speak. Ugly was "in" back in 2007 too, but only long enough for one round's worth of fashion statement. The fad had little staying power because fashion novelty is alarmingly short-lived.

Crocs with glow in the dark charms were sold as part of a promotional event in late 2019. Image source: Crocs.

For any investors anticipating that Crocs' foam clogs will be as marketable a year from now as they were a year ago, keep in mind that the business is rife with one-hit wonders. Parachute pants, cutoff jeans, shoulder pads, fanny packs (twice!), denim jackets, and peasant blouses are just some of the articles of clothing we had in our closets at one point in the past. No more.

But Crocs' ultralight and supercomfortable footwear is more about comfort and less about the look -- perhaps. However, they've always been ridiculously comfortable shoes. Their high comfort scores didn't help sell them in big numbers beyond the peak of their buzz created in 2007.

See, contrary to the rhetoric, Crocs are about the look. In this case, that look is meant to signal to others that the wearer is "so cool I don't even need to worry about what my shoes look like." That, or a similarly anti-mainstream "I refuse to conform to convention." As is the case with so many other looks embraced by the teens doing most of the buying, once Crocs become common, they ceased to serve one of their primary purposes.

That's a tough truth to digest, but talk to any middle schooler or high schooler about how fashion works in their world.

Analysts don't agree with the premise that a flame-out is inevitable, for the record. While COVID-19 has taken a toll on supply and demand, Crocs is expected to resume its recent growth pace into 2021. Next fiscal year's top line is projected to improve 16%, countering this year's likely 9% tumble. Per-share earnings are modeled to reach $1.75 next year after falling to $1.04 this year -- a figure that's down considerably from last year's bottom line of $1.61 per share. 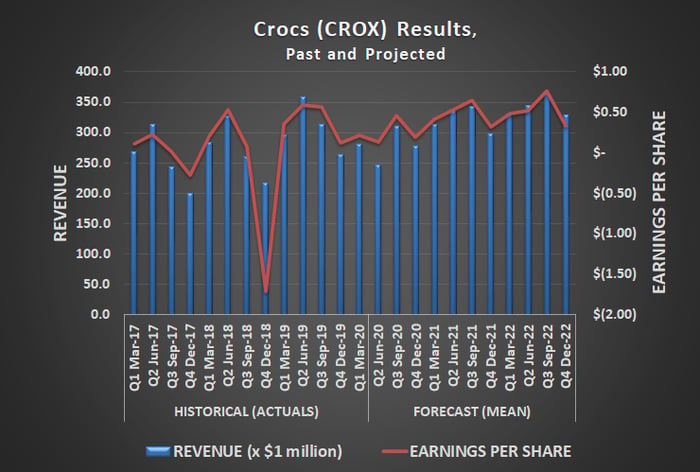 Analysts were expecting a huge 2008 for the company as well, however, based on the fad-driven hysteria whipped up in 2007. The hysteria didn't last because consumers -- as is so often the case with novelty -- didn't actually want Crocs. They wanted something new. Those consumers wanted something else, even if they didn't yet know what they wanted. But the want never really goes away.

It's not as if we haven't seen plenty of these fall-from-grace stories in the stock market, either. Keurig Green Mountain could do no wrong in 2014 when pod-based coffee brewing was hot. Dr. Pepper finally bought the company in 2016 to form Keurig Dr Pepper (NASDAQ:KDP), but it was able to buy it at a price that was about two-thirds below its 2014 high. Shares of Ambarella (NASDAQ:AMBA) soared to a price of $115 when aerial drone mania was taking flight in 2015; it makes the components found in several of those tech-based toys, including ones made by fellow fad name GoPro (NASDAQ:GPRO). Drones have mostly crashed as a growth opportunity, though, with Ambarella shares now holding the line at under $50.

Alphabet mercifully announced its intended acquisition of Fitbit (NYSE:FIT) in November of last year. The price tag of $2.1 billion wasn't chump change, but it's a far cry from the peak $12 billion valuation Fitbit was sporting in 2015 when it was new and presumably the shape of the future. As it turns out, most Fitbit users quit wearing them after just a few months. Not many novelties have any real staying power.

Given consumers' capacity for flightiness that sometimes even surprises themselves, Crocs stock is a tough name to step into now. Current shareholders would be wise to consider taking some profits now, capitalizing on the impressive rebound shares have seen since their March bottom. In fact, a closer look at the chart reveals that that rally is already losing steam.