For the past week, lawmakers have gathered to discuss a matter of extreme importance in light of the COVID-19 pandemic and the subsequent recession it's spurred: a second relief package. In March, the CARES Act was passed for this very purpose, but given the extreme nature of the COVID-19 outbreak and the sorry state of the economy, it's clear that additional relief is needed.

But what will a second stimulus package look like? Here are a few key items to expect out of it.

Though the topic of a second stimulus check was once up for debate, Senate Majority Leader Mitch McConnell said days ago that another round of direct stimulus payments is, in fact, in the works. But the size of those stimulus checks is yet to be determined, or at least announced.

The CARES Act allowed for up to $1,200 in stimulus cash per eligible adult, plus another $500 per dependent child. We don't know if the new relief package will include a direct stimulus that's comparable, but Americans can expect some amount of money to hit their bank accounts once the deal passes. 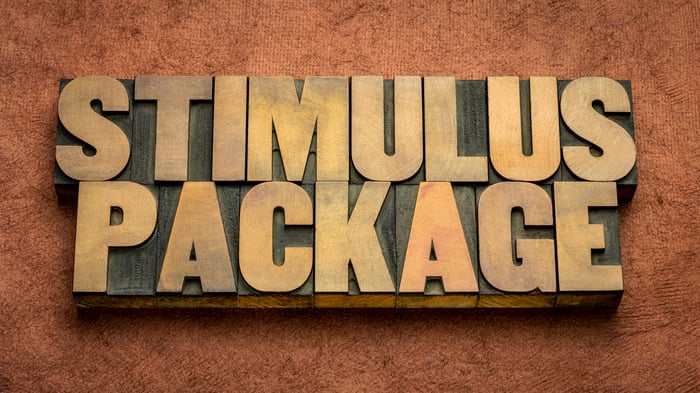 Furthermore, the original stimulus payments that went out under the CARES Act were made available in full to single tax-filers whose adjusted gross income (AGI) was capped at $75,000, and to joint filers with an AGI of $150,000 or less. We don't, however, know what income limits might come into play with a second direct stimulus payment, and it may be the case that a follow-up round of stimulus cash is made available to lower earners only.

Under the CARES Act, workers on unemployment have been eligible for an extra $600 a week on top of their regular benefit. For a while, Republican lawmakers pushed back on extending that boost, citing declining unemployment in May and June as a reason to let it expire at the end of July as the CARES Act calls for. But a recent surge of COVID-19 cases may be driving lawmakers to change their tune. In fact, there's a good chance a second stimulus deal will include a provision for boosted unemployment -- but that doesn't mean Americans will keep getting $600 extra a week.

In fact, the next stimulus package will likely aim to replace 70% of a worker's wages via boosted unemployment, according to Treasury Secretary Steven Mnuchin, which would result in an extra $188 to $310 per week. It's not quite as generous as the $600 boost that's been in play under the CARES Act, but it's better than no boost at all.

Under the CARES Act, small businesses with 500 or fewer employees were eligible for forgivable Paycheck Protection Program (PPP) loans capped at two-and-a-half times their monthly payroll costs. Those loans have saved millions of jobs to date, but at this point, much of that funding has been exhausted by the businesses that needed that money to maintain headcount. Lawmakers have indicated that their next stimulus deal will include a second round of PPP loans, only this time around, it will likely be targeted toward hard-hit businesses only.

To quality for an initial PPP loan, business owners simply had to certify to the fact that they needed the money based on economic uncertainty. To capitalize on a second round, businesses will likely need to prove that they've lost revenue in the course of the pandemic.

Americans are on the edge of their seats

At this point, the public is eagerly awaiting specifics on the next stimulus package, which will reportedly be revealed on Monday. And while some people may wind up disappointed with its outcome, let's hope that it does the job of providing relief at a time when the country is desperate for it.