Please ensure Javascript is enabled for purposes of website accessibility
Log In Help Join The Motley Fool
Free Article Join Over 1 Million Premium Members And Get More In-Depth Stock Guidance and Research
By Jennifer Saibil – Updated Jul 27, 2020 at 10:49AM

The consumer-focused bank is a Robinhood favorite, but are investors looking at the details?

Robinhood has become a popular trading platform for new investors during the COVID-19 pandemic, and the top bank stock traded on the site as of Monday morning is Bank of America (BAC -2.37%). Some of the other heavily traded companies make sense for first-time investors, such as Walt Disney and Amazon.com. Should Bank of America be on that list? Read on to find out.

Let's take a look at how Bank of America is doing. Second-quarter results were better than analysts expected, even with net interest income down 11% year over year and a 9% drop in pre-provision income -- that is, net income before the effects of taxes and provision for loan losses. But loss provisions have been high for most banks as the economy has suffered during the pandemic, and Bank of America's $4 billion provision in Q2 brought earnings per share down 50% year over year to $0.37 per share. 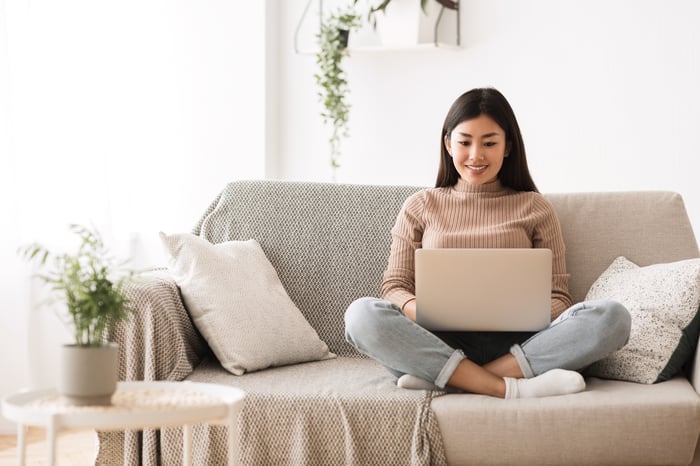 This is a view of the economy more than of the bank. Considering the state of the economy today, Bank of America is showing its strength as a favored and stable financial institution.

What might be interesting to millennial investors is the company's digital and technology focus. Accounts opened online increased 20% over the quarter, accounting for almost half of total sales. Some examples of how the bank is engaging customers digitally:

Banking in general is trickier to understand than retail -- companies that make their money by selling products to customers follow a fairly basic outline for financial statements. Financial institutions' income statements feature elements you won't see anywhere else, such as net interest income, charge-offs, and provisions for losses. So banks may not be the place to start if you're a beginner. However, after you've had a chance to study the banking industry, is Bank of America a good first pick?

Bank of America has a strong consumer division but a smaller institutional division, which is why it didn't perform as well in the second quarter as large institutional banks such as Goldman Sachs. JPMorgan Chase, which is the largest bank in the U.S. by assets, also has an extensive consumer branch and also saw a substantial decline in earnings per share due to provisions for losses. Bank of America's trading arm did, in fact, do very well, which pulled the overall numbers up. Because it's consumer-focused, its metrics are easier to understand than those of investment banks, which have more complex terms and formulas that make up a greater share of its operations. The tech focus may also appeal to younger investors.

Bank of America has also been one of the better-performing bank stocks over the past three years, and although the price has decreased year to date, it has been stronger than Wells Fargo, Citigroup, and Capital One, all of which have seen much steeper declines.

Robinhood investors are very interested in buying when share prices are low, but that's not the only determining factor when considering a company that will deliver increases. In the case of Bank of America, however, the data confirms that it's a strong company with a promising future, and and investors can feel confident about seizing the moment when share price is down to get better educated while their money is working for them.