Please ensure Javascript is enabled for purposes of website accessibility
Log In Help Join The Motley Fool
Free Article Join Over 1 Million Premium Members And Get More In-Depth Stock Guidance and Research
By Rachel Warren – Jul 28, 2020 at 10:11AM

This stock's value has quintupled since the last recession.

The U.S. entered a recession in February, as the world clocked the greatest economic decline since the Great Depression. The last recession of this magnitude was more than a decade ago, between 2007 and 2009. If you're nervous about investing during a global recession, you're certainly not alone. Nonetheless, investing in value stocks when share prices are down could actually reap substantial rewards in the long run. You can also gather a much clearer picture of the strength of a stock based on how it does or doesn't perform during a global recession. While some stocks have floundered during the pandemic, others have remained relatively immune to the volatility of the wider market.

If you own shares of Biogen (BIIB -1.42%) or are thinking about purchasing this stock, you might be curious about what your investment would look like now if you'd bought in during the 2008 recession. If you had bought $1,000 worth of Biogen back then, how much would you have today?

In November 2007 -- right before the last recession started -- Biogen was selling for about $65 a share. A year later, in November 2008, you could purchase shares of Biogen for about $40 each. Even though the recession ended in June 2009, the stock didn't get back to its pre-recession price until early 2011.

Let's suppose you had purchased Biogen in July 2008, when the stock cost about $50. With $1,000 as your beginning investment, you would have been able to buy somewhere in the ballpark of 20 shares. This past Friday, July 24, Biogen was priced at $272.33 per share when the market closed. This means that your initial investment would now be worth approximately $5,446.60. You would have realized a return of over 400%.

Shares of Biogen have been fairly volatile this year. The stock closed the first trading day of the year, Jan. 2, at $294.24, which is about 7% higher than its current price. During the broader market's descent into bear territory in March, the stock experienced sharp highs and lows. On March 12, you could buy shares of Biogen for $268.88 each; it closed at $316.38 on the final trading day of March. Biogen reached its highest trading price this year ($342.55) on April 17. Shares have been trading close to their bear-market low since the middle of June. 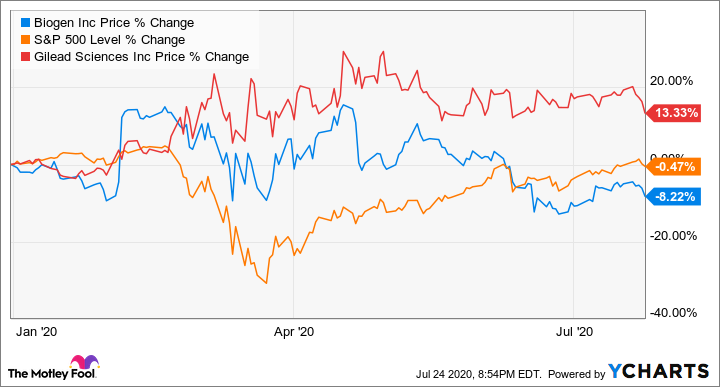 Biogen's balance sheet has been less affected by the pandemic than its stock price. The company entered the pandemic from a relatively solid 2019 in which it reported a 7% increase in revenue, totaling $14.4 billion. This increase in revenue was chiefly due to heightened sales of its multiple sclerosis drugs. Sales of Biogen's spinal muscular atrophy medication, Spinraza, also received a notable boost of 22% in 2019.

Revenue was up 1% ($3.5 billion) in the first quarter and 2% ($3.7 billion) in the second quarter of 2020. Biogen noted that the pandemic lifted the company's financial results by roughly $100 million in the first three months of 2020. However, sales of Spinraza, one of the company's lead revenue growth drivers in recent years, plunged between the first and second quarter of the year. In Q1, revenue for Spinraza was up 9% on a year-over-year basis and touched $565 million. In Q2, sales were up by just 1% year over year, to $495 million. This startling contrast in revenue is likely due to increased competition in the spinal muscular atrophy therapeutics space. Biogen's biosimilars segment saw a 7% drop in revenue in Q2, while new licensing agreements resulted in a 155% increase in "other revenues."

Biogen does have one very big trick up its sleeve. The company's top multiple sclerosis drug, Tecfidera, raked in more than $1 billion in revenue in Q1 of this year. In Q2, sales of Tecfidera accounted for nearly $1.2 billion of Biogen's total revenue of $3.5 billion.  The company is also awaiting a decision from the U.S. Food and Drug Administration (FDA) regarding the pending approval of aducanumab, its investigational human monoclonal antibody treatment for Alzheimer's disease. Biogen submitted its Biologics License Application for aducanumab to the FDA earlier this month, but previous attempts at approval have been fraught with peril. It's definitely way too soon to bank on the speculative multibillion-dollar success of aducanumab when considering Biogen as an investment.

This stock may have been a good investment in the last recession. But given Biogen's continued volatility, I think there are better coronavirus stocks to buy at the moment.