Cord-cutting has accelerated through the first half of 2020. AT&T (NYSE:T) reported nearly 2 million subscriber losses through the first six months of the year. That's up from about 1.6 million during the same period last year. When Comcast (NASDAQ:CMCSA) reports its second-quarter results, investors should expect it to lose about 500,000 subscribers on top of the 409,000 it lost in the first quarter. 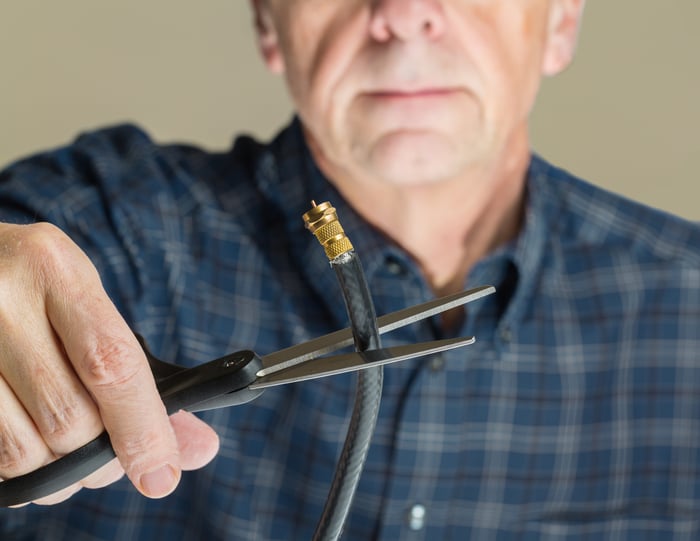 While the coronavirus pandemic has kept consumers at home, they've explored more content options. Some companies have offered extended free trials while other have highlighted their free ad-supported services. Forty percent of cord-cutter households said an extended free trial or free options convinced them to cancel their cable subscription.

Most consumers are able to get general entertainment and news via various streaming options, many of which have been highlighted on Roku and Amazon Fire TV in recent months. Several streaming services have dramatically increased their television ad spend as they see an opportunity to convert pay-TV subscribers to cord-cutters.

With a growing number of options and increased awareness of those options, consumers may feel more confident in their ability to find entertainment after cutting the cord.

2. Cord-shavers are increasingly thinking about cutting the cord

Roku says the typical journey of a cord-cutter goes from traditional subscriber to cord-shaver before fully cutting the cord. A cord-shaver is someone that ditches the bloated bundle for a skinnier bundle of channels, perhaps provided by a virtual MVPD like Alphabet's (NASDAQ:GOOG) (NASDAQ:GOOGL) YouTube TV.

Forty-five percent of respondents identified as cord-shavers in Roku's survey said they're likely to cancel their pay-TV subscriptions in the next six months. Most of them may not, but it's important to look at the trends. A similar survey from Roku last September found just 37% of cord-shavers were likely to cut the cord in the next six months. So, we've seen a significant step up in intent.

That might be because skinny bundles and virtual MVPDs have been raising their prices recently. YouTube TV, for example, increased its rate at the end of June. Others have followed suit. If the savings aren't significant enough with cord-shaving over a traditional bundle, consumers will look for other ways to save money.

Twenty-eight percent of cord-cutters said the loss of live sports during the coronavirus pandemic is their top reason for cutting the cord. But just 17% of recent cord-cutters said they'd return to traditional pay TV when live sports start up again. Many more -- 31% -- were interested in one of the live-sports subscription services offered by the major sports leagues.

Live sports are a main selling point for the cable bundle. Even with a streaming subscription from the leagues, games that are broadcast on regional sports networks and other cable channels are unavailable. But for fans that live away from their hometown, it provides a cost-effective option, especially during shortened seasons. Meanwhile, NFL fans can watch their local team through an over-the-air broadcast if and when the NFL returns this fall.

Roku and Amazon have much to gain from increased cord-cutting. The two companies own the two most popular connected-TV platforms, and have leveraged that control into a greater share of connected-TV revenue. That revenue comes mostly from subscription revenue sharing and advertising. With more users on their respective platforms, Roku and Amazon can throw more of their weight around to negotiate more favorable terms.

That may be to the chagrin of AT&T and Comcast. As mentioned above, neither has struck a deal with Roku or Amazon to distribute their new streaming services. And if the two biggest pay-TV providers want to help offset their subscriber losses with streaming subscribers, they need to be on the two most popular platforms. As cord-cutting accelerates, that task will only get more difficult as Amazon and Roku gain leverage over media companies looking to tap into their respective audiences.