From its early days, SunPower (SPWR 4.11%) defined itself as an innovator: It designed and manufactured some of the most advanced, highest-quality solar cells and modules available. As pricing pressures have driven the industry toward commoditization for years, SunPower is once again betting it can innovate its way to the top, by having the best, differentiated products made affordably -- by someone else.

Vertical integration: Been there, tried that

As the solar industry strived for years to make low-cost solar modules better, SunPower went the opposite way: It invested in making the best solar modules more affordable. But quality usually carries a premium. So as SunPower tried to bring its products to market, it began a process of vertical integration. 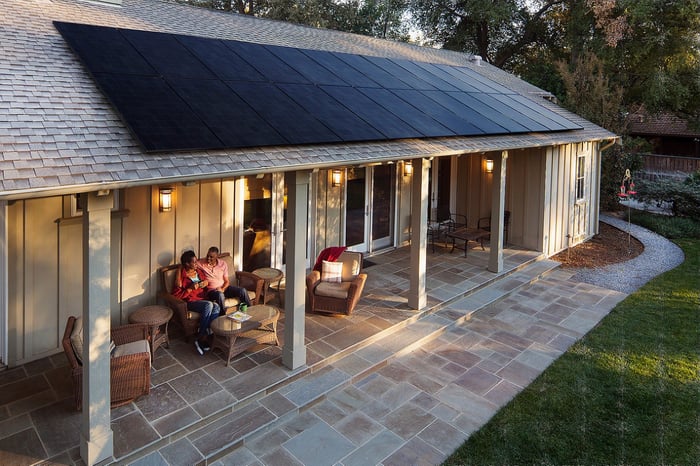 The company continued to invest in fundamental research and manufacturing technology while innovating commercial strategies to generate demand for its premium products. By the late 2000s, SunPower had pioneered the idea of a solar energy services company and created one of the first dealer networks in the U.S. solar industry.

Later, as companies like SunRun and Sunnova popularized the financing of residential solar systems, SunPower continued to vertically integrate by developing its own custom financing solutions.

However, after almost 20 years of vertically integrating its business -- and finding it difficult to make the best of everything under one roof at an affordable price -- SunPower is reinventing vertical integration itself.

Custom products made affordably -- by others

SunPower began the process of refocusing its business by selling its microinverter division to Enphase Energy in June 2018. Through this deal, SunPower got a custom, high-quality product made by the world leader in microinverter technology. Unlike SunPower, Enphase could produce enough microinverters to significantly drive down their costs over time. In return, Enphase gained much-needed access to a segment of the market previously out of reach.

In November 2018, SunPower announced it was teaming up with Hannon Armstrong, a leading financial services company focused on sustainable infrastructure markets, to form SunStrong Capital. With this transaction, SunPower got itself out of the highly specialized and resource-intensive business of raising capital and managing investment funds. Once again, it also got a set of financing options custom-made for its products by a best-of-breed solar finance specialist.

A year later, in November 2019, SunPower announced it was entering into a joint venture with Tianjin Zhonghuan Semiconductor, a top-three manufacturer of solar wafers, to form Maxeon Solar Technologies. Maxeon Solar will manufacture SunPower's premium modules and market them exclusively to SunPower in North America. With this deal, Sunpower sheds a low-margin, capital-intensive manufacturing business and, once again, gets a premium product made by a world-class manufacturer with a more cost-effective supply chain and significant economies of scale.

Throughout the last few years, SunPower could have chosen to forgo custom products altogether and follow the industry trend toward the lowest cost of goods sold, or COGS, possible. Instead, SunPower has stuck with differentiation -- albeit through a different, more cost-effective path. The new SunPower has decided to let specialists make the differentiated products it needs at lower price points, so that it can instead focus all its efforts on packaging and marketing those products to its customers, profitably.

How will SunPower keep those differentiated solutions from finding their way to its competitors and becoming, well, commodities? SunPower remains a majority shareholder of two key pieces of its supply chain -- the module manufacturing and financing joint ventures. And while Enphase could theoretically sell the same kind of microinverters it supplies to SunPower to other customers, those products don't work with almost any solar modules other than SunPower's -- so SunPower's the only company likely to keep buying them in large amounts.

SunPower is now positioned to become a pure-play energy services company. This means that the company will market its suite of premium products -- now made by more efficient third parties at lower price points and fatter margins -- plus training, design tools, marketing, and lead generation to its considerable dealer network. Even in view of the recent consolidation of the industry's two largest national installers, SunPower still has access to a solid 75% to 80% of a market composed of small and medium installers.

The new SunPower has a number of things going for it as it embarks on this new path -- not the least of them being its venerable brand and considerable network of over 500 dealers, over twice as large as its nearest competitor, Sunnova. But, more importantly, SunPower can now focus on maximizing margins and generating profits.

As it refocuses its efforts, SunPower projects that it will grow revenue at a decent 20% per year, and more than triple its gross margins, from the meager 6.7% reported in the first quarter of 2020 to more than 20%. If that strategy succeeds, SunPower will become a substantially more valuable company than it is today. It also plans to bring operating expenses, or OPEX, under 10% of revenue from its recently reported 12%.

The current health crisis in the U.S. will almost certainly slow revenue growth over the next few quarters, which will make it difficult for the company to achieve its aggressive OPEX reduction targets in the short term. However, interested Fools should keep an eye on whether SunPower is able to grow its gross margins consistently over the next several quarters. If it can do that, and its partners can continue to deliver differentiated products at increasingly competitive prices, SunPower may be able to have its cake and eat it, too.