When it comes to holding a stock for the next 50 years, I look for a company with a strong brand -- a favorite that's an important part of consumers' lives. The company may be doing well today. Or, the company may have struggled recently after many years of success. In that case, it might be ready for a rebound after the current coronavirus health crisis subsides.

Here are three popular consumer companies -- and ones that are likely to be around and healthy a half century from now. 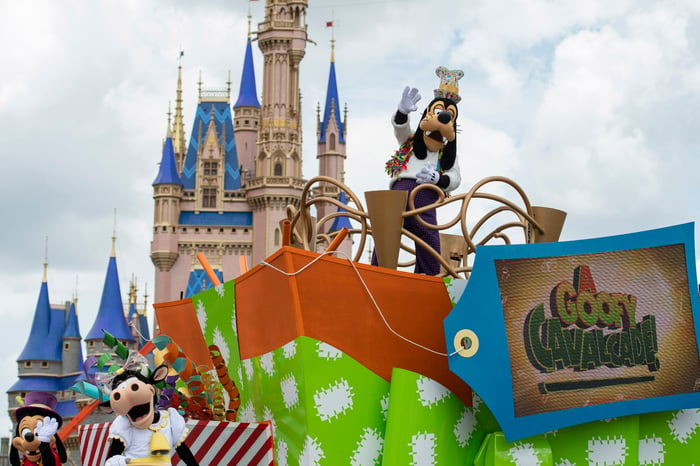 Walt Disney (NYSE:DIS) is having a rough time these days. Its parks, part of its biggest revenue-driving business, were closed for months due to the coronavirus outbreak. Now, with most reopened, attendance is below usual levels due to social distancing measures. At the same time, Disney faces the costs of running the parks and implementing new safety measures such as cleaning processes. And the media giant has postponed big-screen debuts like the live-action film Mulan as the health crisis continues in the U.S.

In spite of this grim near-term situation, the long-term picture for Disney still has plenty of sparkle. The Magic Kingdom in Florida is the world's most-visited theme park, with Disneyland in California a close second. Some may prefer to postpone Disney trips amid the current pandemic. But once the crisis abates, it's likely consumers will return to much-loved activities they were forced to put on hold -- such as visiting Disney.

In the meantime, Disney's new streaming service, Disney+, is gaining ground. The company said it had about 54.5 million subscribers as of May 4. This puts growth way ahead of schedule. Disney, which predicted Disney+ profitability in 2024, initially set a goal for 60 million to 90 million subscribers by that time.

Disney's stock is down 20% this year through Thursday's close. It may not really gain momentum anytime soon. But an investment at today's prices has potential to pay off in the long term.

McDonald's (NYSE:MCD) is another brand that's strong enough to weather the coronavirus storm. The fast food giant once again came in No. 1 in the Restaurant Business and Technomic report on the top 500 highest-grossing restaurant chains last year. Though McDonald's strength in drive-thru helped compensate for recent distancing measures, the coronavirus outbreak still weighed on business. In the second quarter, global comparable sales slid 23.9%. That's compared with a 6.5% gain in the year earlier period. But the good news is, as restaurants reopened, sales improved from month to month. Comparable sales fell 39% in April but by June were only down 12.3%.

While we don't know the duration of the current health crisis, it is likely a temporary situation. So, let's look to pre-outbreak numbers as a guide to McDonald's future prospects. Comparable sales in the two months ending Feb. 29 gained 7.2% from the prior year. And in 2019, full-year global comparable sales rose 5.9% for the biggest gain in more than 10 years. McDonald's also is a good buy for investors seeking dividends. The restaurant chain has lifted its dividend every year in the 43 years it's been paying a dividend. The company last year reached its goal of paying out $25 billion to shareholders in the three-year period ending 2019.

McDonald's shares have rebounded more than 40% since their market crash lows, erasing losses for the year. Even so, the stock is a bargain for the long-term investor.

Nike (NYSE:NKE) shares have rebounded 54% since the market crash, paring this year's decline to only 4.4%. Nike temporarily closed most of its shops in key areas like China and the U.S. during the earlier stages of the coronavirus outbreak, and sales slid 38% in the fiscal fourth quarter. Still, online sales boosted investor optimism. The company reported a 75% increase in digital sales in Q4.

Digital sales growth may not continue at the same pace with most Nike stores now reopened. But it is likely that gains in digital sales will remain significant. Here's why: Nike has been ramping up its digital platform since 2017. That's when it launched an effort to sell directly to consumers through its website and stores in a seamless manner. That's already started to bear fruit. In the quarter prior to the health crisis, the company posted a 38% increase in digital revenue.

It's too soon to predict what will happen in 50 years. But so far, Nike has shown its strength and ability to adapt to a changing market. Those qualities make this consumer discretionary stock a great long-term buy.