Tell me we're having salmon for dinner, and I'll be a happy man. Tell me you found a salmon-like company (one that's swimming upstream), and I'll be even happier. Innovators that are able to implement business practices that fly in the face of the conventional wisdom don't come around too frequently. But when these leaders do emerge, they often represent compelling investment opportunities that have the potential to provide explosive returns.

Unsurprisingly, in the case of energy investing, these nonconforming companies, BWX Technologies (NYSE:BWXT), Brookfield Renewable Partners (NYSE:BEP), and SolarEdge Technologies (NASDAQ:SEDG), deal in alternatives to fossil fuel. Forget coal, oil, and natural gas: These businesses are reimagining the energy landscape by turning to nuclear energy as well as the power of the sun, wind, and water.

With a history that precedes the Civil War, BWX Technologies has a story that traces its roots to the 1850s and the invention of the water tube boiler. Since then, including its spinoff from Babcock & Wilcox in 2015, BWX has become a leader in providing nuclear solutions to both the government and commercial customers. According to the company, for example, its production facility in Cambridge, Ontario is the only large commercial nuclear equipment manufacturing facility in North America.

The company recognizes the lion's share of its revenue from its nuclear operations segment, which deals in the manufacturing of nuclear reactors for the U.S. military as well as the providing of reactor fuel and elements for research purposes at universities and government laboratories. Contributing $1.4 billion to the company's top line, which was $1.9 billion, in 2019, the nuclear operations segment is poised to continue powering the company's financials thanks to a $4.3 billion backlog.

While the high barrier to entry suggests that the company is on firm footing -- it's unlikely that a start-up nuclear reactor manufacturer will emerge -- what I find equally compelling about the company is its focus on cutting-edge applications of nuclear power. For example, it's a leader in the production of TRi-structural ISOtropic (TRISO) coated kernels, a novel approach to fuel for nuclear  reactors. According to the Department of Energy: "Each TRISO particle is made up of a uranium, carbon and oxygen fuel kernel. The kernel is encapsulated by three layers of carbon- and ceramic-based materials that prevent the release of radioactive fission products." Because of this layering system, TRISO kernels cannot melt in a reactor, eliminating the possibility of nuclear meltdowns like the recent one at Fukushima in Japan, and can be used in smaller reactors that don't require the traditional enormous containment structures. BWXT describes itself as "the only U.S. company to manufacture irradiation-tested uranium oxycarbide TRISO fuel using production-scale equipment."

It's not only the size of the company's portfolio that indicates how extensively the company's transforming the energy landscape -- it's the geographic diversity. As of the end of the first quarter of 2020, Brookfield Renewable Partners operates hydroelectric assets on 82 river systems in the United States, Canada, Columbia, and Brazil. In addition, it operates 103 wind power facilities on four continents, representing more than 4,700 MW of capacity. And with regards to solar power, Brookfield Renewable Partners has an interest in 92 utility-scale operations and 4,852 distributed generation facilities.

Setting its sights on the sun, SolarEdge has developed an alternate solution to traditional photovoltaic (PV) systems, which use string or central inverters to collect the sun's power its sights set on the sun: power optimizers. Installed at each PV module, SolarEdge's direct current (DC) power optimizers provide a more flexible solution that allows the PV system to collect solar power more efficiently and at a price comparable to the traditional systems. 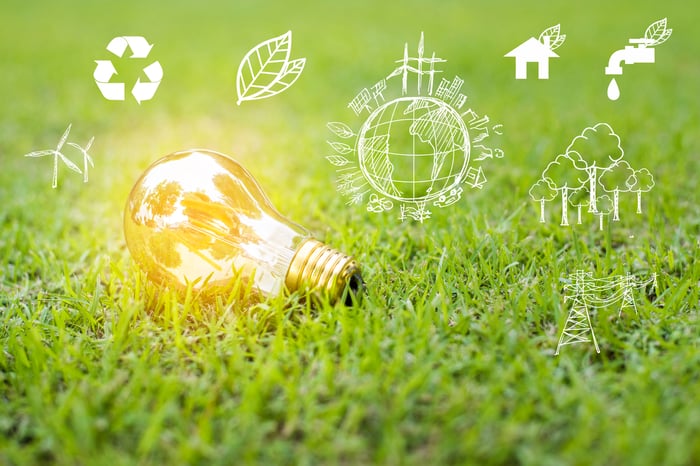 Over the past few years, the company has made a concerted effort to diversify beyond its core competency, power optimizers, into other areas of clean energy. With the acquisitions of Gamatronic and Kokam in 2018, SolarEdge made its foray into energy storage, thus offering its customers an opportunity to increase the value of their residential solar systems. SolarEdge continued on its shopping spree in 2019 with the acquisition of SMRE, which develops powertrain technology for electric vehicles.

It's not only American rooftops where SolarEdge is harnessing the sun's rays. As of December 2019, the company had installed solar PV systems in 133 countries and, as of Q1 2020, SolarEdge had shipped nearly 55 million power optimizers around the world, where it monitors more than 1.5 million systems.

While BWX Technologies, Brookfield Renewable Partners, and SolarEdge are all at the vanguard of renewable energy, the individual companies provide differing investment opportunities. For those who are interested in mitigating the risk of a downturn in a particular industry, Brookfield Renewable Partners is an ideal choice. On the other hand, BWXT and SolarEdge, are best-suited for investors who want greater exposure to the nuclear and solar industries, respectively.