Regularly scheduled flights by the company to the International Space Station could begin in six weeks.

On Saturday, May 30, SpaceX made history when it successfully sent NASA astronauts Bob Behnken and Doug Hurley to the International Space Station (ISS) atop a SpaceX-built and -operated Falcon 9 rocket. Two months later, the company made history again when it brought them back.

After departing the ISS on Saturday, SpaceX's Crew Dragon Endeavour capsule splashed down safely off the coast of Pensacola, Florida at 2:48 p.m. EDT Sunday, wrapping up a successful Demo-2 crewed mission for SpaceX. At this point, SpaceX has successfully completed its back-to-back Demo-1 uncrewed and Demo-2 crewed missions with two separate spacecraft. That means it has performed all of the prerequisites necessary to certify the Crew Dragon craft for regularly contracted flights to ISS in the future. 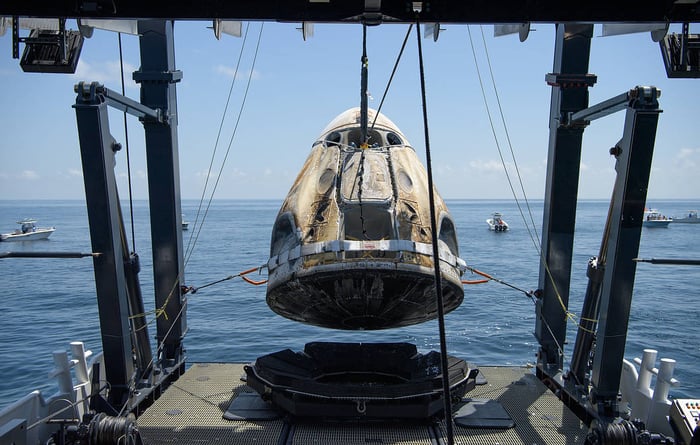 NASA plans to spend the next six weeks reviewing data generated from the two flights, after which SpaceX should become the only U.S. space company fully certified to carry astronauts into space from U.S. soil. Boeing (BA -6.61%), which is seeking a similar certification, failed its first uncrewed test flight late last year, and plans to attempt a second in October or November.

Certification will enable SpaceX to proceed with performing up to six additional crewed missions and claiming the balance of the now $3.1 billion it has been awarded under NASA's Commercial Crew program. If and when Boeing catches up, the total value of the contracts it could win is close to $5.1 billion.

And even this is only the beginning. As SpaceX COO Gwynne Shotwell commented after the landing, "we are starting the journey of bringing people regularly to and from low Earth orbit, then on to the moon and then ultimately on to Mars."

Why ChargePoint and Other EV Stocks Plunged Today

Why Shares of QuantumScape Are Powering Down Today