Please ensure Javascript is enabled for purposes of website accessibility
Log In Help Join The Motley Fool
Free Article Join Over 1 Million Premium Members And Get More In-Depth Stock Guidance and Research
By Pearl Wang - Aug 3, 2020 at 8:25AM

The parent of value chains T.J. Maxx, Marshalls, and HomeSense is well positioned in the current environment for revenue growth and market share gains.

TJX Companies (TJX 1.65%) is an off-price retailer that will continue to do well in the current state of economic uncertainty. The company, which owns T.J. Maxx, Marshalls, HomeGoods, and other retail outfits, is seeing a nice rebound in its business following its store shutdowns earlier this year. Its "value hunt" format has long resonated with shoppers, and it has the opportunity to gain market share as competitors struggle.

As of May 21, the specialty retailer had reopened over 1,600 of its stores. For the 1,100 stores that had been open for at least a week, sales were higher year over year in all countries and states. This is a promising start for the retailer as it gets back to normal after COVID-19-related shutdowns that began in mid-March. The retailer is also adding new stores to its roster, increasing its store count by 16 to 4,545 stores by the end of the first quarter (May 1). 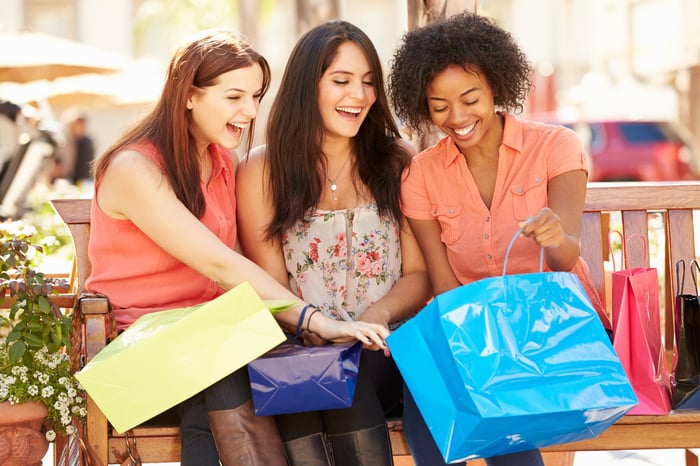 Management is encouraged by the early results as stores reopen. CEO Ernie Herrman noted in the first-quarter earnings report: "Although it’s still early and the retail environment remains uncertain, we have been encouraged with the very strong sales we have seen with our initial reopenings. We believe this very strong start speaks to our compelling value proposition and the appeal of our treasure-hunt shopping experience, as well as pent-up demand." For years, the company's bargain-hunting appeal has helped it to stand out from other discounters, such as Walmart, and online competition too.

The recovery will likely gain steam in the second half of the year as T.J. Maxx will be able to acquire plenty of quality inventory for its customers. Herrman said, "We are currently seeing plentiful off-price buying opportunities, which, as we look to the remainder of the year, gives us confidence in having excellent brands and quality merchandise available to us."

TJX Companies can outperform during downturns

In this environment, consumers will favor off-price, value-oriented retailers. They are being more careful and mindful with their spending, given the current economic uncertainty. According to a study by McKinsey, 31% of those surveyed in the U.S. said they were changing to less expensive products to save money as a result of the pandemic. Forty percent of respondents said they were "becoming more mindful of where I spend my money." This change in consumer behavior will push more traffic and wallet share to off-price stores.

TJX stock price outperformed the broad market in the last downturn. During the Great Recession, shares fell 22% between Oct. 2007 and Mar. 2009, while the S&P 500 shed 51% during the same period. And in the past ten years, TJX has more than doubled the return of the broad market with a 400% gain.

Many department stores in the U.S. have suffered from closures with some chains shutting down stores permanently. For example, home furnishings retailer Pier 1 is closing 450 locations (about half of its base) in 2020 as part of its Chapter 11 bankruptcy filing. J.C. Penney has been another loser with plans to close 30% of its 846 stores as part of its bankruptcy filing. Those companies' challenges leave clear openings for TJX to fill the void with its various store banners.

Overall, TJX is one of the few retailers that has room to run and expand in this environment. It can be resilient even in a recession, and early signs point to a rising consumer demand for the company's value-oriented offerings. Its fiscal second quarter report will be an important one for investors to follow. In the meantime, anyone looking for a retailer near the top of its game should consider this stock.