Shares of United Parcel Service (UPS 1.26%) climbed 28.4% in July, according to data provided by S&P Global Market Intelligence, with most of those gains coming on the final days of the month. UPS in late July reported better-than-expected second-quarter results, causing the share price to soar higher. 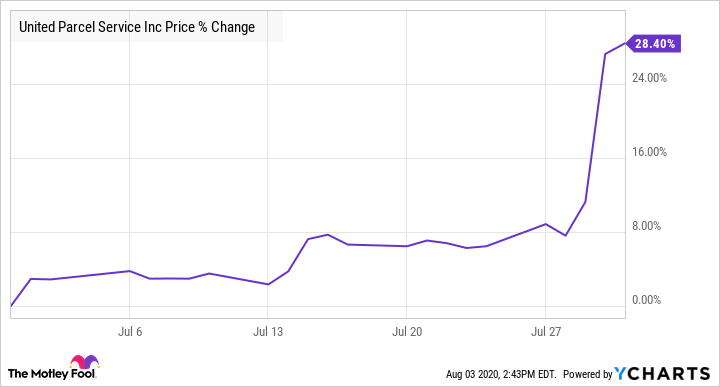 Investors went into earnings season not sure what to expect from transportation companies. We knew going in the COVID-19 pandemic had created some slowdowns in industrial production that were sure to ripple through supply chains and transportation networks. But with consumers stuck at home, e-commerce was expected to thrive.

UPS on July 30 delivered for shareholders, reporting adjusted second-quarter earnings of $2.13 per share on revenue of $20.5 billion. That's far better than the $1.07 per share in earnings on sales of $17.5 billion that had been expected.

Increases in online shopping did, as hoped, boost volumes. UPS said overall package volumes were up 20.9%, with its domestic business up 22.8% and business-to-consumer (B2C) deliveries up 65% in the United States.

That B2C business is usually one of UPS's lower-margin operations, but profitability held up better than expected. Overall operating margin fell by just 60 basis points to 11.4% in the quarter, which helped fuel the earnings-per-share beat.

Part of this is UPS benefiting from a unique moment in history; UPS during the post-earnings call with investors said that while the pandemic continues to impact activity into the third quarter, U.S. margins "could be lower" in the second half of the year relative to the first half. There is still a lot of uncertainty and a lot that could go wrong, including rising unemployment and a weakening consumer.

Then again, there are some indications that the pandemic has accelerated the already seemingly inevitable push to grow e-commerce. If so, some of these higher volumes could be permanent. That would necessitate UPS investing in its infrastructure to add capacity. But if it means more quarters like this one, investors are likely not going to mind spending to facilitate that growth.