Please ensure Javascript is enabled for purposes of website accessibility
Log In Help Join The Motley Fool
Free Article Join Over 1 Million Premium Members And Get More In-Depth Stock Guidance and Research
By Lou Whiteman – Aug 3, 2020 at 10:12AM

The company is partnering with Rolls-Royce to develop a supersonic commercial aircraft.

Shares of Virgin Galactic Holdings (SPCE -6.67%) jumped 6.5% at the open on Monday after the space tourism company announced a partnership with Rolls-Royce (RYCEY -4.59%) to develop supersonic propulsion technology.

Virgin Galactic is best known for its work developing a spacecraft designed to take tourists into orbit, but the company has a number of projects in the pipeline. One of them is the development of a high-speed commercial aircraft that would greatly reduce flight times on international travel. 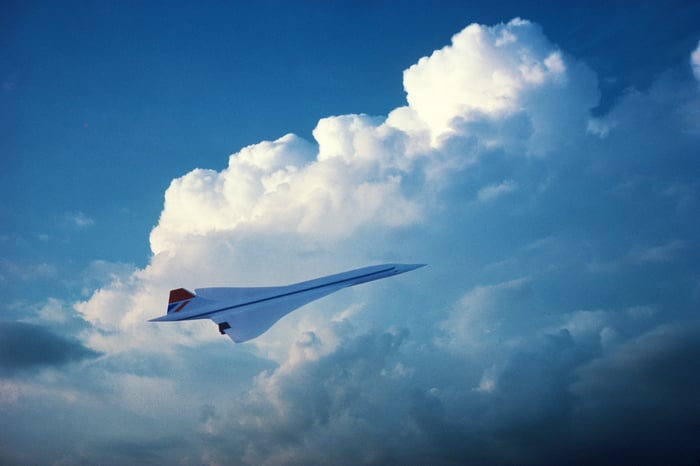 The idea of high-speed aircraft isn't new. The Concorde aircraft flew from 1976 until 2003, with limited commercial appeal. Supersonic travel has always been limited by restrictions that prohibit high speeds over land due to noise pollution from the sonic boom, but a new generation of companies is developing aircraft designed to limit the boom in hopes of winning approval to provide more complete service.

The Federal Aviation Administration has indicated an openness to reconsidering the ban if the noise pollution issues can be solved. But Virgin Galactic will face off against a number of deep-pocketed aerospace and defense contractors should supersonic travel eventually be allowed to return.

Virgin Galactic's core business is high-risk, high-reward, with the stock trading more on the promise for future success than based on any actual results. Supersonic commercial travel fits in very well with that profile, with significant potential but very little concrete revenue for the foreseeable future.

I'm skeptical this can become a sustainable, profitable company any time soon, but Virgin Galactic, if nothing else, deserves credit for dreaming big and capturing the imagination. Don't build your retirement plan around Virgin Galactic shares, but as long as you understand the risks there is no reason not to make Virgin Galactic a small part of a diversified portfolio as a way of hopping aboard and (hopefully) enjoying the ride.