Please ensure Javascript is enabled for purposes of website accessibility
Log In Help Join The Motley Fool
Free Article Join Over 1 Million Premium Members And Get More In-Depth Stock Guidance and Research
By Lou Whiteman – Updated May 28, 2018 at 5:01PM

Regulators are beginning the process of clearing the way for a new generation of faster-than-sound flying. Some of the largest names in aerospace could be among the beneficiaries.

The dream of traveling from coast to coast or across the ocean in a matter of hours is a real possibility, with the Federal Aviation Administration beginning work on updated regulations to accommodate a new generation of supersonic aircraft. The changes would be great news for passengers, while creating both challenges and new opportunities for aerospace giants like Lockheed Martin (LMT -0.90%) and Boeing (BA -3.39%).

The FAA intends to issue a formal proposal on new noise guidelines by December, according to a post on the White House's Office of Information and Regulatory Affairs website. The new rules would allow for testing of new supersonic technologies that are designed to not generate a disruptive sonic boom, and pave the way for eventual approval of the new technologies if they work as planned. 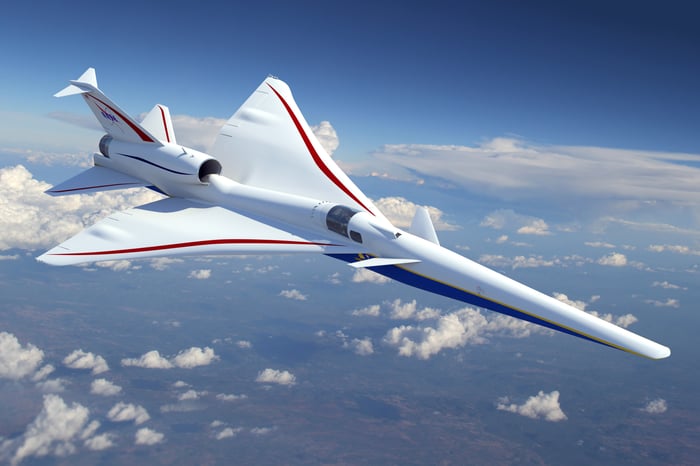 Commercial aviation hit supersonic speeds in 1976 when the Concorde took to the skies, but that aircraft, because of its loud boom, was limited to operating only over water due to concerns that the boom would break windows, scare livestock, and generally disrupt daily lives. Those guidelines restricting the Concorde to trans-ocean flying limited the airplane's usefulness and helped lead to its retirement in 2003.

Advances in design and material technology now allow for aircraft designs that minimize that sonic boom, and NASA has been working with the industry on concepts since 2010. But even if the noise challenges can be overcome, FAA regulations currently restrict supersonic flight based on speed and not based on noise generated, so the government would have to update regulations before commercial flights or even tests could be permitted.

The FAA's planned action is good news for Lockheed Martin, which earlier this year was awarded a $247.5 million contract from NASA to design and build a modern supersonic commercial aircraft. Delivery of the aircraft is expected in late 2021, and NASA is likely to use the data the test flights produce to build its case for allowing a return of faster-than-sound flying.

Lockheed has extensive experience in supersonic flying thanks to its F-35 and F-22 military programs, and it's collaborating with privately held Aerion to develop a supersonic business jet prototype. Success could open new lines of business for Lockheed, which exited the commercial aviation business more than 30 years ago.

The ramifications for Boeing are more complicated. The company's massive commercial division accounts for more than 60% of its $93.4 billion in annual revenue. The company needs to be at least cognizant that its long-range, widebody order book, which currently stands at about 1,000 airplanes, could eventually come under pressure should airlines have a supersonic alternative.

Of course, that threat is still a way off, and Boeing is working on its own hypersonic offerings. The company earlier this year unveiled a new hypersonic design that at least initially will be targeting the defense market, but last summer at the Paris Air Show, CEO Dennis Muilenburg said of commercial hypersonic flights, "I think in the next decade or two you're going to see it become a reality."

Through its venture capital arm, Boeing also has a stake in Reaction Engines, a British firm working to develop a hybrid engine able to travel five times the speed of sound in atmosphere. It's far too early to project demand for supersonic aircraft or to predict list prices, but Boeing appears to be hedging its bets and committing R&D resources to make sure it is not left behind if these initial efforts prove to be a success.

Other companies are pursuing the technology as well. Boom Supersonic, a Denver-based start-up backed by Japan Airlines and several venture firms and partnered with Richard Branson, is developing a plane capable of flying at more than twice the speed of sound that it hopes to introduce by 2023.

The talk of an early 2020s return of supersonic flying is exciting, but for the foreseeable future, Boeing's order book feels secure. Even if these new concepts work as planned and regulators sign off on noise rules that will allow the planes to fly over land, airlines are likely to tread slowly before committing to new technologies.

These supersonic jets, like the Concorde before it, will likely be significantly more expensive than the Boeing 777s and 787s they could potentially replace; it also remains to be seen what percentage of airline passengers will be willing to pay premium ticket prices to shave a few hours off of a flight from New York to Tokyo. Until commercial operators have a better understanding of the cost of and demand for the faster flying, they're likely to stick with what they know.

What is clear is that supersonic flying is poised for a comeback. There might be turbulence along the way, but over the long haul expect both Lockheed and Boeing to be among the winners as the technology matures.