Travel remains one of the last hurdles before getting back to pre-COVID-19 sales levels.

The COVID-19 pandemic continues to have an adverse effect on business around the globe, with the restaurant industry being among the industries negatively impacted the most. But for some chains, things could be far worse. The sole licensee of KFC, Pizza Hut, and Taco Bell in China from Yum! Brands (YUM 1.61%) -- Yum China (YUMC -0.63%) -- fared pretty well during the second quarter of 2020, all things considered.

Nearly all of Yum China's more than 10,000 locations (a milestone reached in July) are open again; and while recovery slowed to a trickle in June and July as ongoing actions to fight the spread of the virus continued, revenue had rebounded back to 93% of where it was a year ago. Specifically, KFC comparable-store sales (an average of foot traffic and value of guest orders) were 90% of what they were in the second quarter of 2019. Pizza Hut was at 88%.

There's work to be done before Yum China can claw its way back to where it was at the start of 2020, but it's enviable progress compared to where many other restaurants are sitting at the moment. The key to its success lies in its sizable digital business and ability to invest even in lean times. And still operating in the black with ample cash and no debt on the books, this remains one of my favorite restaurant stocks. 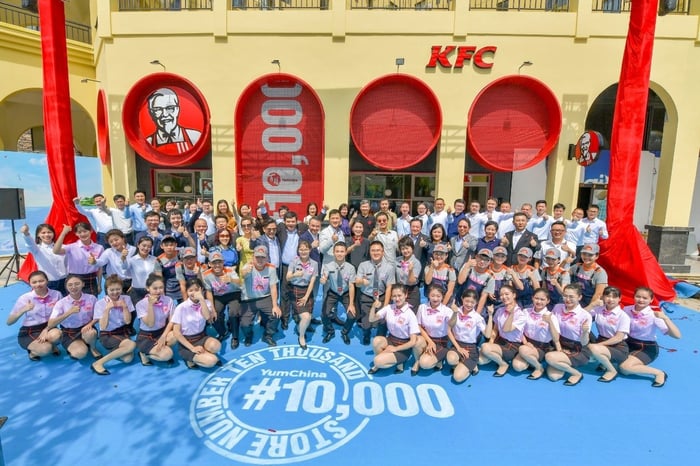 To be fair, the headline figures at Yum China weren't pretty. Revenue declined 11% from a year ago to $1.9 billion (or down 7% excluding currency exchange rates). Adjusted operating profit fell 36% (33% excluding currency) to $132 million. And adjusted earnings per share (which includes a partial sale of Yum China's holding in food delivery service Meituan Dianping (MPNGF -7.60%), of which Yum China still holds 4.2 million shares) fell 24% to $0.35. As a result, the stock now trades for 39 times trailing-12-month adjusted earnings per share.

But here's the good news: Even in an incredibly difficult stretch of time, Yum China remains a profitable endeavor. Free cash flow through the first half of 2020 was $90 million (which includes the $177 million in acquisition expense related to 607 Huang Ji Huang hot pot locations). KFC and Pizza Hut had a staggering 265 million loyalty members during the last quarter, with those members accounting for two-thirds of sales. And delivery, which was already a big piece of the puzzle at Yum China, grew to 27% of sales at KFC (up from 18% last year) and 35% at Pizza Hut (up from 24% a year ago). Digital and delivery services have been invaluable assets this year and will continue to be in the years ahead as the global consumer pivots to a new era of mobility.

Yum China management cited travel as one of the last remaining challenges to full recovery, due to the fact that many KFC stores are located in areas like train stations and airports. Low traffic at travel hubs will likely remain far less busy than usual due to ongoing restrictions related to COVID-19. 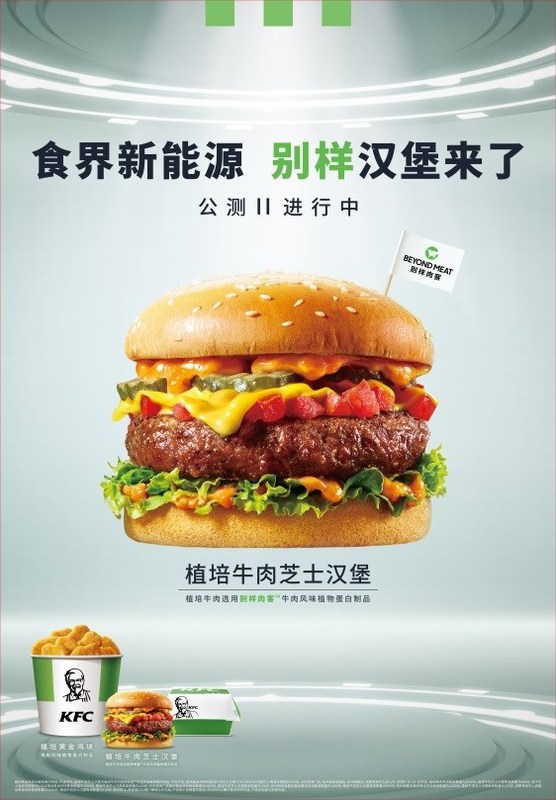 A promotional poster shows the Beyond Meat burger now being marketed at KFC locations in China. Image source: Yum China.

But that hasn't stopped Yum China from continuing its pace of expansion as it continues to trudge toward its goal of 20,000 restaurants across the country. Excluding the Huang Ji Huang acquisition, 169 new stores were opened in Q2, most of them bearing the KFC banner. But emerging brands are on the move too. Taco Bell made its first appearance beyond Shanghai, with a new flagship store opening in Shenzhen and one almost finished up in Beijing. The COFFii & Joi chain also continues its advance as Yum China bets on the long-term growth of coffee in China.

And of final note was the potential for plant-based food. CEO Joey Wat said that plant-based protein test campaigns were successful last quarter, with the roadblock now being scaling domestic production of the food. Campaigns at KFC, Pizza Hut, and Taco Bell all sold out within days last quarter, indicating another possible growth lever for the company to pull on in the coming years if it can ramp up supply with its meat-alternative product partners.

Things are far from perfect for the restaurant industry in China, and KFC and Pizza Hut specifically still have ground to make up. Nevertheless, the outlook could be far worse, and Yum China has a rock-solid base to build on in the years to come with an overall profitable food empire and $1.71 billion in cash and equivalents on the books. Shares don't come cheap due to the depressed earnings reported so far this year, but my positive long-term outlook for this multi-brand operator remains unchanged.