The railroad outperformed the market and its peers in July.

Shares of railroad Kansas City Southern (KSU) rose 15.1% in July according to data provided by S&P Global Market Intelligence. The move was inspired by a couple of related factors. First, the company reported a good set of second-quarter earnings in the middle of the month. Second, media reports are claiming that private equity companies are interested in bidding for the railroad.

The second-quarter earnings, and the positive trend within them, were previously discussed in an article. To briefly recap:

Meanwhile, the buyout speculation is understandable given that Kansas City Southern is by far the smallest of the listed Class 1 railroads. In addition, it's an attractive strategic asset due to its role in commercially linking the U.S. with Mexico. 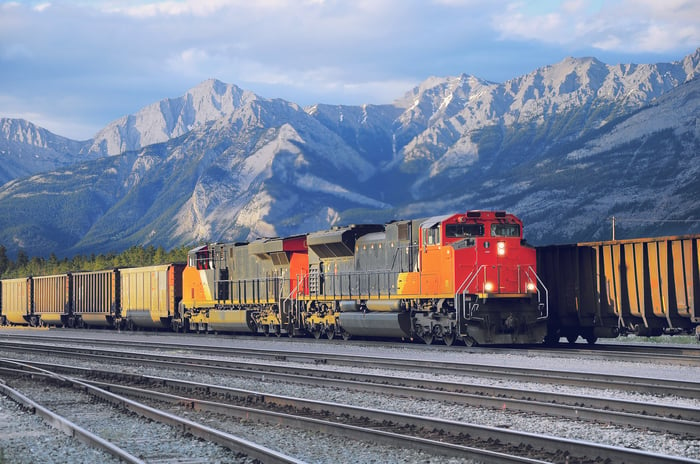 Buyout speculation will come and go and it's not a specific reason for buying the transportation stock. However, the reasons why the railroad might be sought-after definitely is. Like all the other listed Class 1 railroads, Kansas City Southern is making great strides in improving key metrics such as increasing train length, reducing terminal dwell, and increasing carload velocity. These improvements will help the railroad reduce its operating expenses and therefore its operating margin in the future.

As such, the market is being rational in pushing the stock price higher as management makes more and more progress on the matter. In addition, if it becomes clear that companies are making concrete plans to shift production to North America and Mexico, then the market should start to price in increased revenue expectations for the stock.

It's still a difficult trading environment, and there's no guarantee that the recovery will continue as it began over the summer. However, while investors wait to see what happens with the economy at large they can keep an eye on the company's PSR metrics. In addition, management's commentary around the long-term potential for margin expansion should be keenly followed. There's a lot to like about the railroad, even if 2020 is shaping up to be a very difficult year.