Can Caterpillar sustain its dividend after an ugly earnings report?

Caterpillar (CAT 0.19%) is one of the largest equipment manufactures in the world, with an international dealership network for industries such as construction, energy, transportation, mining, marine, and more. The company is often regarded as an economic bellwether, given that its size and the performance of its business lines can provide leading indicators for the broader economy.

Let's see how Caterpillar's second-quarter earnings results fit into the bigger picture for the company to determine if Caterpillar can sustain its dividend, and ultimately decide if Caterpillar is a buy. 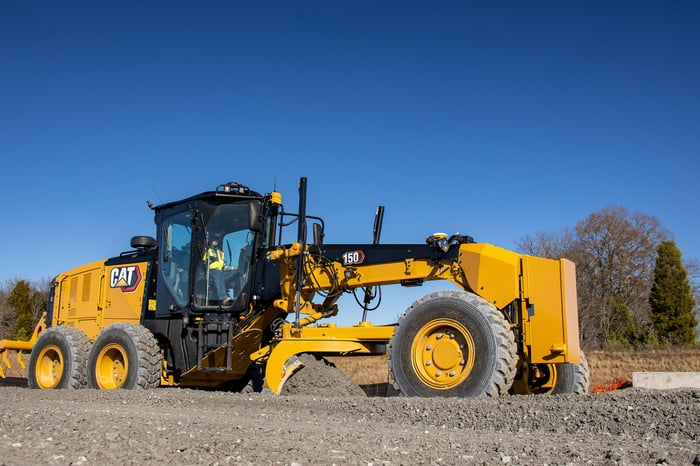 There is no way to sugarcoat Caterpillar's ugly earnings, which is probably one reason why the stock sold off about 4% since the company reported them. Revenue fell 31% compared to the same quarter last year, but earnings per share (EPS) fell 70%. Caterpillar declined to provide further guidance for the year, but with just $2.82 in EPS so far this year it's unlikely that the company will get anywhere close to its initial EPS guidance of $8.50 to $10.00.

Caterpillar's business is on the front lines of some of the hardest-impacted industries. Despite how bad things are in the energy industry right now, that was actually Caterpillar's least-impacted segment. Revenue from construction industries was down 37.4% compared to the same quarter last year, energy and transportation was down 24.4%, and resource industries was down 35.5%. Caterpillar's poor results are actually fairly easy to understand: In a pandemic-stricken world, there's just not a lot of opportunity to build a new sports stadium or office building, let alone sell a ton of brand new 3400-series gas compression engines.

Caterpillar made a point to remind investors that it had returned $2.3 billion to shareholders so far this year, and has paid a dividend every year for the last 87 years. Caterpillar has 26 consecutive years of dividend growth, earning it a spot on the premier list of Dividend Aristocrats. "We recently declared our quarterly dividend and remain proud of our status as a Dividend Aristocrat," said CFO Andrew Bonfield.

While Caterpillar is proud of its dividend track record, it's worth asking if the company can afford it. Although earnings were sour, Caterpillar has amassed $18.5 billion in available liquidity, and its enterprise cash now stands at $8.8 billion. Another important note is Caterpillar's debt issuances from last quarter, which included low-interest rate 10-year and 30-year terms.

Aside from debt and enterprise cash, Caterpillar was able to earn $500 million in free cash flow (FCF) from machinery, energy, and transportation for $941 million in total for the quarter, exceeding the $600 million it returned to shareholders. Put another way, although FCF was down by more than 50% year over year (YoY), it was enough to cover dividends. The seasonality of Caterpillar's third quarter will likely mean that it won't be able to afford the dividend based on FCF alone -- in which case it could use some of its reserve cash.

A rocky road ahead

Caterpillar's grim reality is that it is bringing in way less revenue and profit than it's used to, which is going to pressure its business across the board. Caterpillar's dividend remains intact thanks to ample liquidity, cash, and decent FCF. However, some of Caterpillar's financial metrics -- like debt to capital, debt to equity, and its net total long-term debt -- are on the rise. 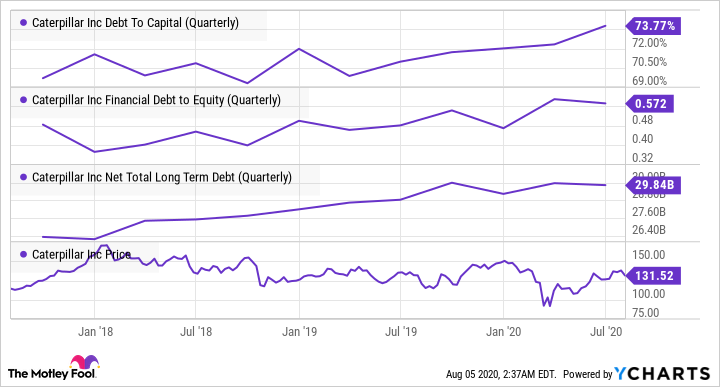 With the suspension of share buybacks, it's unlikely that Caterpillar will be reducing the equity portion of its capital structure anytime soon. Instead, it will likely be using the majority of its FCF to pay dividends, as well as limit the amount of additional debt issuances.

As is common with Caterpillar and other industrials, the company finds itself right in the trenches of this economic decline -- but it also tends to be one of the main benefactors of economic surges. This economic decline seems to be particularly painful for Caterpillar, and it wouldn't be surprising to see its stock languish until revenue and earnings show some semblance of normalcy. However, Caterpillar does yield over 3%, and its track record of both dividend growth and perseverance through economic challenges is impressive. I'm still a long-term fan of the company, but my expectations will be low until I see things turn around.