Please ensure Javascript is enabled for purposes of website accessibility
Log In Help Join The Motley Fool
Free Article Join Over 1 Million Premium Members And Get More In-Depth Stock Guidance and Research
By Maurie Backman – Aug 7, 2020 at 11:18AM

As lawmakers in Congress struggle to find a compromise between their dueling relief deal proposals, the public is left in the lurch.

The COVID-19 pandemic has driven the U.S. into a recession and unemployment crisis like no other. Since April, the nation's official unemployment rate has consistently been in double-digit-percentage territory, and more than 100,000 small businesses have closed their doors permanently.

In late March, Democrats and Republicans in Washington came to an agreement on a massive, broad-based stimulus package -- the CARES Act, which poured $2.2 trillion into a host of measures aimed at keeping that recession from being even worse. Among them, it famously sent stimulus checks directly to most Americans, and added $600 a week to the checks of those receiving state unemployment payments. But those stimulus checks have long since been spent, the unemployment boost lapsed at the end of July, and the country's economy is still in bad shape, with more than 30 million people on the unemployment rolls.

Under these circumstances, it's clear that the U.S. needs another stimulus deal, and the longer it takes lawmakers to come to an agreement on what it should include, the more the public stands to suffer. Unfortunately, it seems like negotiations are largely going nowhere.

Where a second relief package stands

In late July, Republican lawmakers in the U.S. Senate introduced the HEALS Act, a bill that would spend about $1 trillion to prop up the economy, and which calls for, among other provisions:

But Democratic lawmakers aren't on board. The stimulus plan passed in May by the House of Representatives -- the HEROES Act -- was much larger, and an extended meeting Thursday night yielded little progress with regard to bridging the gaps between the two proposals. 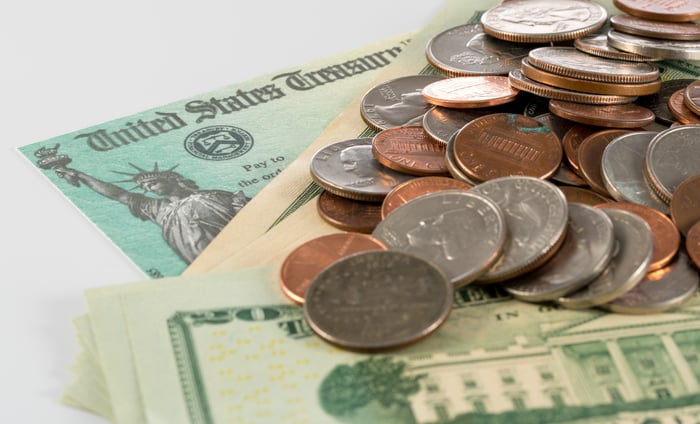 There are a few key sticking points that are stalling stimulus deal negotiations. First, there's the size of the relief package itself. The HEALS Act has a $1 trillion price tag attached to it, which some conservatives view as too much. Democratic lawmakers are looking to deliver around $3 trillion in relief, including $1 trillion to support state and local governments, which have seen their tax revenues plunge due to the crisis.

Then there's unemployment. The CARES Act enacted a temporary $600 weekly federal boost to unemployment, but that boost expired at the end of July. Republican lawmakers have proposed replacing it with a $200 weekly unemployment boost through September, after which jobless benefits would replace 70% of unemployed workers' lost wages.

Democratic lawmakers don't see that proposal as adequate. Specifically, they're pushing for the $600 weekly boost to be extended through the end of the year, with the goal of allowing the average jobless worker to replace their lost paychecks in full.

Republican lawmakers have long argued that retaining that $600 boost will create a scenario where unemployed people are disincentivized to return to work, thereby derailing the economic recovery everyone is hoping for. They've also insisted that as the economy opens back up, jobs will naturally get created. But Democratic lawmakers argue that if jobless workers take a major hit to their income, they'll not only struggle themselves, but stop pumping money back into the economy through spending, thereby thwarting our progress toward a recovery.

When will we have an answer?

Earlier in the week, some lawmakers sounded hopeful that an agreement would be reached at some point today. But given the glaring lack of progress in the negotiations, that may not happen. And it's those who are struggling with income loss who stand to suffer the most as the process drags on.

The longer it takes lawmakers to come to an agreement on a stimulus deal, the longer the public will need to wait to receive their second stimulus checks, the longer small businesses will need to wait to receive additional PPP funding, and the longer jobless Americans will be left struggling. It's a dire situation all around, and one that should be pushing Democrats and Republicans in Congress to find a way to start seeing eye to eye.