Please ensure Javascript is enabled for purposes of website accessibility
Log In Help Join The Motley Fool
Free Article Join Over 1 Million Premium Members And Get More In-Depth Stock Guidance and Research
By Alex Carchidi – Aug 9, 2020 at 6:08AM

The telehealth leader's competitive position was a force to be reckoned with well before its announced merger with Livongo.

Teladoc Health's (TDOC -3.54%) meteoric rise to prominence this year shows no sign of slowing, with the company reporting impressive positive results in its July 29 earnings report as a result of strong tailwinds from the ongoing pandemic. Between Teladoc's accelerating year-over-year quarterly revenue growth of 85%, totaling $241 million, and the addition of 92% more subscribers compared with 2019 for a total of 51.5 million people, the company's popularity is paying off handsomely for its investors. The $18.5 billion merger with Livongo Health (LVGO) announced Aug. 5 shows that the company is eager to increase its telehealth market share and its services even further by adding integration with Livongo's health sensor and patient analytics capabilities.

With social distancing policies showing no sign of ebbing in the U.S., it's no surprise that consumers are showing strong interest in accessing telehealth. Few would dispute that Teladoc is moving more rapidly than any of its competitors in telehealth, most of which are smaller private companies. Potential investors may still be wondering whether the company's long-term future is bright, especially in light of the market's largely negative reaction to the news of the merger with Livongo, which saw Teladoc's stock drop by more than 15%. Given that the stock's massive growth this year could be based on hype rather than sound fundamentals, will Teladoc's stock pay off for the investors who purchase it today at a relative discount? Let's compare the reasons for and against buying Teladoc stock to answer this question. 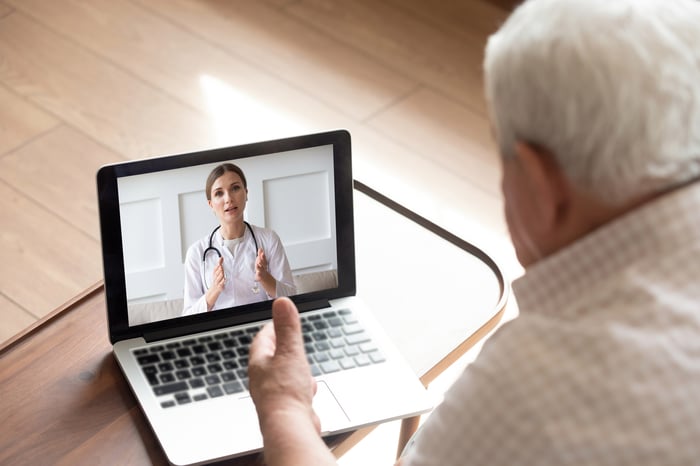 Why it's worth buying Teladoc right now

Aside from Teladoc's strong revenue growth and rapidly expanding subscriber base, one reason to consider buying the stock is that consumers are increasingly relying on its services as a risk-free alternative to in-person visits with clinicians, which could result in exposure to the coronavirus. In fact, 16% of subscribers used its remote-care services last quarter, a significant increase over 9.1% in the same period last year. The company also registered 2.8 million total visits in Q2, breaking its prior record by 203%.

Experienced investors will be more  interested in the company's consistently expanding enterprise value (EV) than its burgeoning user base, however. After starting the year with $6 billion, Teladoc posted an EV of $20 billion in the second quarter, indicating that its balance sheet is swelling. Importantly, Teladoc also exhibited formidable EV growth in each of the last four years, so the pandemic isn't the only factor in play.

Teladoc is also ahead of the game relative to competitors, including the hybrid in-person and telehealth provider 1Life Healthcare (ONEM -0.29%) and the private healthcare appointment-scheduling company ZocDoc. In its Q1 earnings report, 1Life said that its membership base and net revenue only increased by 25% year-over-year, to totals of 455,000 and $78.8 million respectively -- far below Teladoc's equivalent sums. For its part, ZocDoc only launched its telehealth offering in May after facing the complete collapse of its in-person bookings in April. There's no guarantee that these competitors will continue to lag behind, but there's no evidence that they are eating Teladoc's market share, either.https://www.zocdoc.com/about/news/zocdoc-video-service/

Finally, Teladoc didn't dilute its shares by issuing any new common stock in 2019, though on May 14 it did make a private offering of $850 million in convertible senior notes.

As strong as Teladoc looks today, there are a handful of issues that should give potential buyers pause. First, Teladoc isn't a profitable company yet, and it doesn't have a consistent history of hitting its earnings targets even when subscriber numbers are surging. While its profit margin of negative 13.2% is something the company will eventually need to address, it isn't an obstacle to increasing market share or revenue based on this quarter's earnings report.

On the other hand, Teladoc's trailing-12-month (TTM) revenue was $716.3 million, but its selling, general, and administrative (SG&A) expenses were $396 million, a shockingly high percentage of its total revenue. This could be the result of high customer onboarding costs, given that selling and marketing expenses totaled $206 million. Thankfully for Teladoc, as the company's brand gains recognition it won't be necessary to spend as much on marketing -- unless competitors start to threaten its market share.

The last mark against Teladoc is its high TTM price-to-sales ratio of 24.4, which means that the price is inflated relative to the company's base of revenue from service sales. Of course, this is no fault of the company's leadership, nor does it mean investors shouldn't purchase Teladoc at some point in the future when prices are lower.

The verdict on buying Teladoc today

While Teladoc's acquisition of Livongo has pushed the prospect of attaining profitability a bit further down the road, the increased market share of the combined company should mean significantly higher revenue potential. Likewise, current revenue growth makes the company's negative profit margin less significant, though it will still need to control its costs to avoid relying on issuing new stock for cash. And now that consumers are becoming accustomed to accessing healthcare via telehealth, I would be surprised if Teladoc's user base or service utilization rate were to shrink anytime soon.

Thus, I think Teladoc has a place in my portfolio, though not at its current price. I'll be looking for opportunities to buy Teladoc at a discount, with the goal of holding onto it for at least five years.