The eight-second video featured an exploding star, with the hashtag "#UltimateCountdown." Additionally, the cover art on the GeForce account was replaced with a still image of the exploding star and the caption, "The #UltimateCountdown. 21 Days. 21 Years." Digging a little deeper into the clues suggests the next-generation GPUs could be introduced within three weeks. 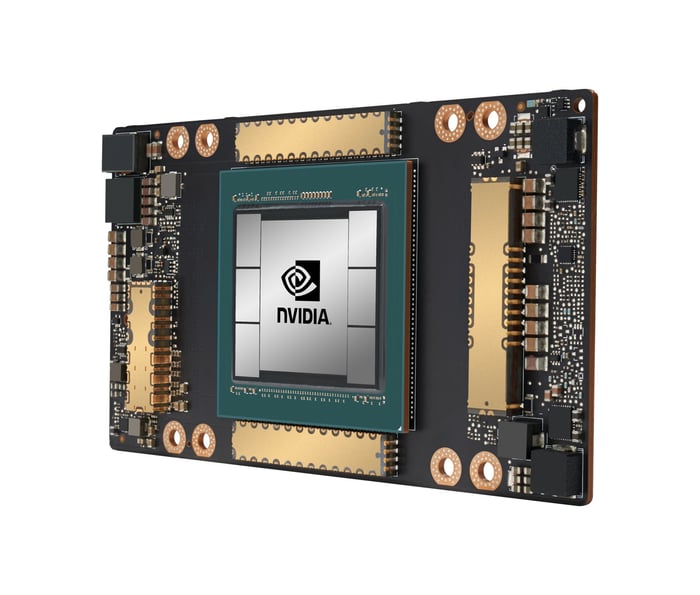 The NVIDIA A100 server-based GPU, built on the company's next-gen Amphere architecture, was introduced in May. Image source: NVIDIA.

NVIDIA introduced its original GeForce 256 gaming GPU on August 31, 1999 for the high-end gaming market. It was the first GPU designed for personal computers with the ability to perform the mathematical calculations previously handled by the computer's central processing unit (CPU). Although the term was used earlier, NVIDIA marketed the GeForce 256 as "the world's first GPU," since it was the first graphics chip to include a transformation and lighting engine.

Twenty-one days from now -- August 31, 2020 -- would mark exactly 21 years from the historic debut of the GeForce 256, which seems to tease the release of the GPU based on NVIDIA's latest tech later this month.

This would be consistent with previous rumors that suggested that the RTX 3000 -- built from NVIDIA's next-generation Amphere architecture -- would potentially debut on or about September 9. The technology is replacing processors built on NVIDIA's Turing architecture. The first processor based on the new technology, the A100 server-based GPU, was introduced in May.

The teaser video and other hints, taken together, suggest that the debut of the new processor is imminent.