It's been hard to think of the stock market as a single entity lately, because various parts of the market have behaved much differently from others. Throughout much of 2020, technology stocks have led the way higher, but that trend seemed to reverse course on Monday. As a consequence, some parts of the market were sharply higher while others fell just as significantly. Just before 11 a.m. EDT Monday morning, the Dow Jones Industrial Average (DJINDICES:^DJI) was up 221 points to 27,655. However, the S&P 500 (SNPINDEX:^GSPC) was down 3 points to 3,348, and the Nasdaq Composite (NASDAQINDEX:^IXIC) dropped 112 points to 10,899.

High-profile stocks also saw considerable volatility based on important news. For Eastman Kodak (NYSE:KODK), the same federal loan support that boosted its share price so dramatically last week could now be its downfall, as government officials took action that could put the financing in jeopardy. Meanwhile, Nikola (NASDAQ:NKLA) led the charge among electric vehicle manufacturers as it apparently positioned itself to win what could become a sizable business for the truck specialist.

No money for Kodak?

Shares of Eastman Kodak plunged 30% Monday morning. The move followed news over the weekend that the government agency responsible for a proposed $765 million loan for the company had chosen to hit the pause button on providing the funding.

The U.S. International Development Finance Corporation had said just last week that it would extend the loan to help Kodak produce essential ingredients for use in making pharmaceuticals. In supporting the loan, officials argued that ensuring a domestic supply chain for these materials was of vital interest to U.S. national security.

However, after the announcement, allegations of impropriety surfaced. Some questioned the manner in which Kodak released the news, pointing to unusual stock trading activity prior to the formal press release. Until the allegations get addressed, the government isn't comfortable moving forward with funding its loan to the company.

In response, Kodak expects to do an internal review to see what happened. If the former film giant can't clear its name, then what many saw as a potentially transformative event could disappear like a developing darkroom photograph exposed to white light. 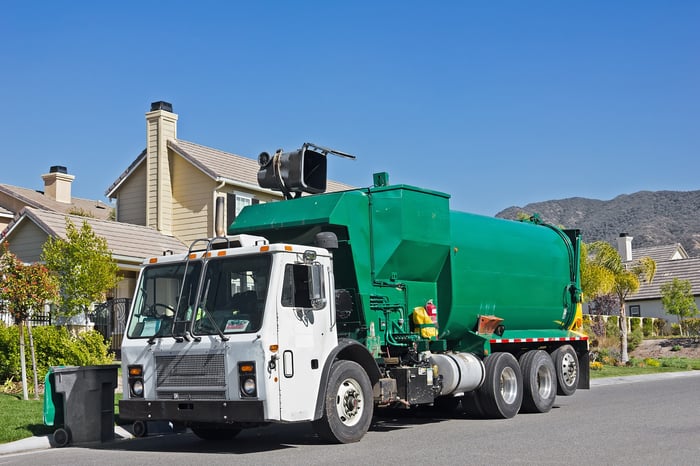 Noisemakers like this could become a thing of the past. Image source: Getty Images.

Nikola takes out the trash

Elsewhere, Nikola shares jumped 12%. The maker of electric trucks has seen massive volatility lately, but good news came today in the form of a huge order that opens up an important -- though potentially smelly -- new market.

Garbage specialist Republic Services (NYSE:RSG) has ordered 2,500 Nikola electric trucks for use in its waste disposal operations. The vehicles are expected to go up to 150 miles, allowing Republic to pick up 1,200 trash cans with a single charge. Republic has the option to double the size of its order.

The vehicles should have big advantages over conventional garbage trucks. In addition to having zero emissions, the Nikola trucks should outperform in both horsepower and torque. They should also be considerably quieter than most garbage trucks.

It'll be a while before you see Nikola garbage trucks on the road, though. With testing starting in early 2022 and an anticipated 2023 delivery date, there's a long way to go before Nikola will prove that it can find treasure in trash and justify its valuation for growth investors.