Walmart (WMT -0.65%) wants to ensure Amazon (AMZN -2.72%) doesn't encroach on its leadership in online grocery store sales, so it is partnering with Instacart to begin offering same-day delivery.

Although it is starting in just a handful of major cities, it reflects the realization that if the retail king wants to remain on its throne, then speedier, more convenient shopping options are essential. 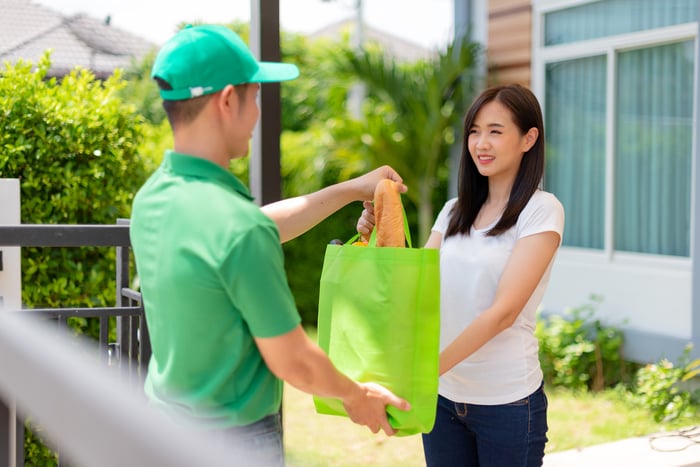 Meeting the deluge head on

The coronavirus has changed how Walmart views the market. Although it has partnered before with Instacart in a limited capacity (last year, they joined to deliver groceries in Canada), the two have not had a relationship here in the U.S. because Walmart only wanted Instacart to serve as a last-mile delivery provider, whereas Instacart wanted to list Walmart products on its marketplace.

While Walmart saw online grocery shopping double during the early days of the pandemic, it lost almost half its weekly share of the market compared with other players as it was unable to handle the crush of demand.

Data analytics firm Second Measure says Instacart had the opposite result, seeing its share of the market soar to 57% in April.

That likely was enough to convince Walmart to acquiesce, as CNBC reports Instacart will now host the retailer's products on its marketplace as they test same-day grocery delivery in Los Angeles; San Francisco; San Diego; and Tulsa, Oklahoma.

The news site notes that Amazon is able to offer same-day grocery delivery for its Amazon Fresh and Amazon Prime Now services, using both its own warehouses and its Whole Foods stores. It also still has plans to develop a physical grocery chain separate from Whole Foods.