It was one piece of bad news after another for the fledgling fuel cell-powered truckmaker.

Shares of hydrogen-powered truck company Nikola (NKLA 1.03%) plummeted 55.6% in July, according to data from S&P Global Market Intelligence. The volatile stock began the month at more than $67 a share but ended it at just $30.

It was a month packed with bad news for the fuel cell start-up. That's probably not what most investors expected. Nikola wrapped up a strong June by opening preorders for its fuel cell-powered Badger pickup truck. Of course, that truck won't be available until 2022, and only the renderings have been unveiled. But that's been par for the course with Nikola, which at this point has an ambitious business plan and not much else. 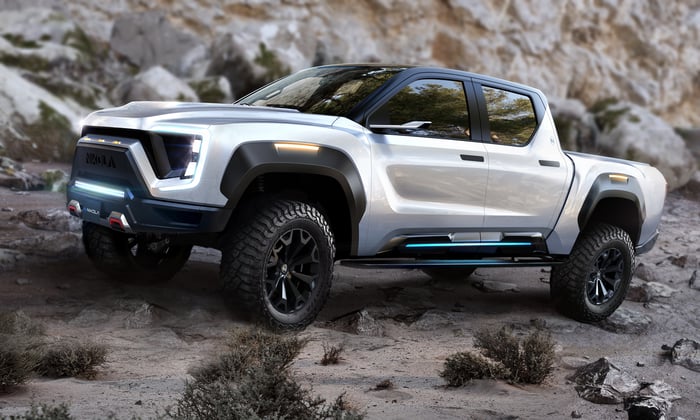 In July, some notable analysts began to view Nikola with skepticism. On July 7, RBC analyst Joseph Spak initiated coverage with a hold rating on the stock. That was followed by another hold rating from Deutsche Bank analyst Emmanuel Rosner, who initiated coverage on July 17 -- but who actually seems bullish on the company's long-term prospects, if it can get its manufacturing off the ground.

But what really seems to have spooked investors was Nikola's July 22 announcement that it would begin allowing redemption of warrants. The warrants were guarantees to early investors that they could buy Nikola shares for $11.50 each -- about a 70% discount to the company's closing price on July 21 -- and Nikola's predecessor VectoIQ Acquisition had issued some 23 million of them in 2018. The warrants must be redeemed by Aug. 21, at which point their value converts to just $0.01.

The problem for investors was that over the course of one month, 23 million extra Nikola shares were going to be issued, diluting the value of current shares. With more than 300 million shares outstanding, the impact would be limited, but shareholders of the would-be automaker raced to dump their shares anyway, giving the stock a 25% haircut before the week was out.

Nikola is a speculative stock, and a risky one. That said, it's also a stock with a lot of hype surrounding it, and that means shares are likely to swing wildly, both upward and downward. Sure enough, by Aug. 10, shares were up 50% from July's close. If you plan to invest, be aware that a lot could go wrong for Nikola before the first Badger ever rolls off the assembly line in 2022, and expect more wild swings before then.