Please ensure Javascript is enabled for purposes of website accessibility
Log In Help Join The Motley Fool
Free Article Join Over 1 Million Premium Members And Get More In-Depth Stock Guidance and Research
By James Brumley – Aug 12, 2020 at 10:00AM

The fitness-tech business relies on selling new, hope-giving solutions before consumers remember that discipline is the key.

You've probably seen television commercials for its products even if you're not terribly familiar with the company's fiscal performance. Peloton Interactive (PTON -1.70%), maker of web-connected fitness equipment, has made sure consumers know what its brand is all about. That marketing effort may even be the key reason Peloton shares have performed so well since the company went public in September. Enthusiasm can be infectious, sometimes in unexpected ways.

Investors who anticipate that Peloton will still be turning heads five years from now the same way it does today, however, may want to adjust their expectations. Indeed, the stock's highest-growth days may already be in the rearview mirror. 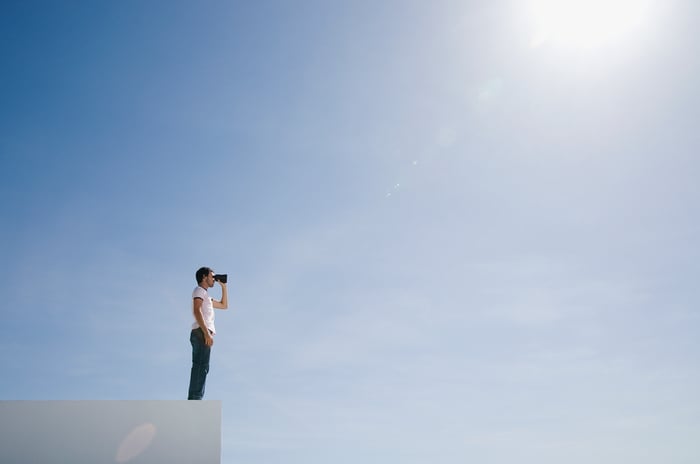 What Peloton Interactive gets right

To its credit, Peloton's equipment addresses two of the health and fitness industry's biggest challenges.

First, it offers a true gym-like experience at home, complete with a personal workout leader and a virtual class of fellow Peloton treadmill and exercise bike owners. Even when tired and distracted consumers might be ready to skip a session, a feeling of community may keep them engaged.

Second, at-home exercises equipment saves time. Users don't have to drive to and from the gym and then wait for apparatus to become available. A workout can be started in finished in a few minutes.

The combination of these two solutions translated into equipment sales of $420.2 million during its most recently completed quarter, and subscription revenue of $98.2 million. The company believes subscriber growth and subscription revenue persisted into the current quarter, which will be reported on Sept. 10. The unique challenges of getting and staying fit in a world upended by COVID-19 has certainly accelerated Peloton's growth.

The odds of Peloton Interactive maintaining its current degree of interest and buzz into 2025, however, are low simply because the company's equipment and technology don't address three other big challenges for the fitness industry.

Chief among those challenges is consumer fickleness.

The idea of simplified fitness inspires well-intended plans today. As is the case with any fitness regimen, discipline and commitment are the ultimate key. Not many people have a whole lot of it. The numbers vary from one study to the next, but most research on the subject suggests that between half and two-thirds of paying members rarely if ever actually step foot in their gyms.

Again, Peloton addresses part of the challenge -- the "gym" is at home. Accessibility isn't necessarily the impasse, however. As fellow fool Nicholas Rossolillo explained of a Gallup poll taken late last year, about half of all fitness tracker owners said they were only "somewhat helpful," which could suggest that consumers don't fully utilize those purchases. Other studies suggest about half of all activity trackers stop being used within a matter of months. Those wrist-worn devices are an even more accessible path toward better fitness than Peloton equipment is, and many consumers won't even consistently wear them for more than a few weeks.

Another challenge that could slow Peloton's growth is the price point. The company's exercise bikes start at a retail cost of around $2200. Treadmills go for more than $4000. There's a market for high-end fitness equipment, but not a huge one, although the company offers financing plans to make its products more affordable.

The company is reportedly answering the call. Peloton CFO Jill Woodworth said last month that a cheaper treadmill was in the works, and there are also whispers that the company is working on a rowing machine. Those products may simply materialize at a later time.

It would be a strategic shift with some tricky nuances though. Namely, lower-cost equipment would pit it directly against better-established names like Nautilus and NordicTrack. It's also unsurprising to learn that other equipment makers are moving into the subscription-based fitness routine market. Mirror and Tonal are just a couple of the names aiming at Peloton's subscription customers, and any of them could eventually undercut Peloton's subscription prices in a big way.

Finally (and in the same vein), Peloton doesn't offer a follow-on purchase that would make sense for existing equipment owners to add to their collection. Sure, there may be some consumers to add a rowing machine and/or a treadmill to their exercise bike. Money and room become something of an issue for the average consumer though.

The irony is, a currently unprofitable Peloton Interactive may be out of the red by 2025. It's lost $160 million through the first three quarters of its fiscal 2020, but it's not difficult to see where things are going. Guidance for a top line of more than $1.7 billion this year is only a start. Five years from now, recurring and profitable subscription revenue could boost the top line in a big way.

The bigger and better Peloton gets between now and then, however, the more competitions steps up and copies its products with cheaper versions. In the meantime, a stock priced at more than 13 times the company's trailing sales suggest the best-case scenario is already priced in.

Bottom line? Peloton may still be the premier name in the business come 2025, but fitness equipment is a tough business. Just ask Nautilus, Schwinn, and Icarian Fitness, all three of which effectively drove one another into bankruptcy in the early '90s by chasing into the same fitness craze that took shape in the late '80s. The industry just doesn't lend itself to defensive moats. Peloton's only moat right now is the brand name's prowess, and that's cost the organization nearly $400 million in marketing and sales spending this year... about one-fourth of its revenue. The company can't spend like that forever.