Please ensure Javascript is enabled for purposes of website accessibility
Log In Help Join The Motley Fool
Free Article Join Over 1 Million Premium Members And Get More In-Depth Stock Guidance and Research
By Luis Morales - Aug 21, 2020 at 7:41AM

Among public US utilities, Avangrid (AGR -0.22%) ranks near the top in its commitment to sustainable energy. With a substantial pipeline of solar and wind projects on the horizon and a lofty dividend yield, Avangrid is positioning itself to deliver significant shareholder value for years to come. 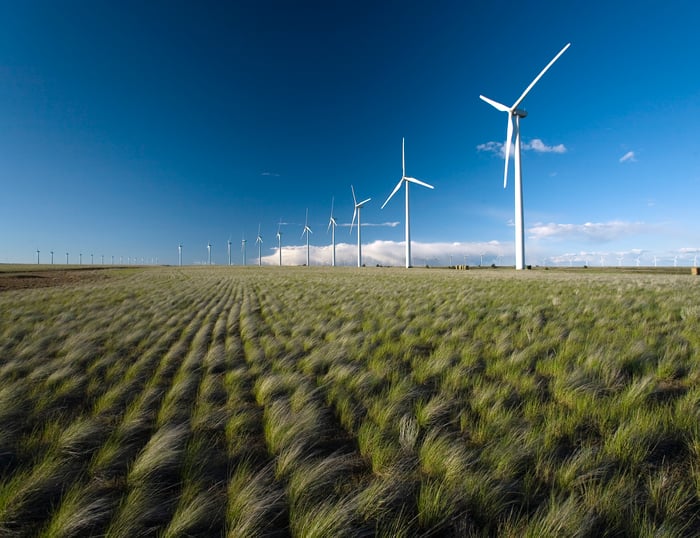 How Avangrid makes 80% of its money today

Over 80% of Avangrid's revenue today comes from selling electricity and natural gas to its 3.3  million customers in New York and New England. As a regulated public utility, it has very limited pricing power: It can only charge its customers so much for what it sells.

However, with about 90% of its electricity already being generated from emission-free sources,  and an aggressive target to be carbon-neutral by 2035  , Avangrid is already doing almost all that it can to grow its margins with the technology available today.

NextEra is largely considered one of the greenest US utilities, with margins its competitors rightfully envy. But Avangrid's gross margins for 2019 were 76% compared to NextEra's 77%. Its fuel expense as a percent of operating expenses -- a measure of how efficiently it's using renewables to drive down fuel costs and drive up profits -- was 28% compared to NextEra's 32% for the same period. And in terms of the percent of its energy generated from emission-free sources, Avangrid already ranks substantially ahead of NextEra .

Of course, there is always room for incremental improvements in how efficiently and cheaply a utility can keep its business running. But if Avangrid wants to grow its bottom line significantly over the next years, it has to find other ways to generate additional revenue.

Almost 20% of Avangrid's revenue today comes from its development side: Avangrid Renewables, LLC, a wholly owned subsidiary focused on developing wind and solar projects for large clients, including other utilities and large corporate customers inside or outside of its service territory. While material, almost 20% is not quite the almost 30%  that NextEra generates from NextEra Energy Resources, its subsidiary focused primarily on developing wind and solar projects.

During its most recent earnings call, Avangrid's newly minted CEO, Dennis Arriola, touted Avangrid Renewables's 19GW pipeline of solar and wind projects for external clients as instrumental to the overall company's future growth. To put this into perspective, NextEra – the world's largest producer of energy from solar and wind today, with about twice the number of ratepayers as Avangrid in its service territory – boasted about the company's 12GW pipeline of renewable projects during its Q3 2019 earnings call.

While Avangrid provided few details about the timeline for building the new projects, 19GW would almost quadruple Avangrid's existing 7.5GW renewable energy generation capacity, which would translate into significant revenue growth in the coming years. While a pipeline is different than a set of committed projects, the company's management and track record in this space are as solid as they get: Its majority shareholder, Iberdrola, is the world's leading developer of wind generation, and its new CEO has spent over 25 years in the energy sector -- including four years at solar innovator and then-developer SunPower.

Even assuming that Avangrid's giant pipeline and the resulting additional revenue take a few years to materialize, Avangrid is a solid retirement stock today. Its stock performance (assuming reinvestment of its lofty 3.6% dividend yield ) is on par with the S&P 500 and the S&P Electric Utilities Index over the last four calendar years, delivering 64% stock appreciation between the end of 2015 and the end of 2019 with relatively low risk.

Growth-minded Fools interested in significant stock appreciation should watch for more details on Avangrid Renewables's progress toward executing on its project pipeline during upcoming earnings calls.