Please ensure Javascript is enabled for purposes of website accessibility
Log In Help Join The Motley Fool
Free Article Join Over 1 Million Premium Members And Get More In-Depth Stock Guidance and Research
By Brian Withers – Aug 21, 2020 at 11:45AM

Its technology and moat give this innovator a long-term advantage.

U.S. monthly retail sales of electronics and appliances dropped more than 50% from February to April, and by June still hadn't reached pre-pandemic spending levels. This pullback impacted sales for Universal Display (OLED -2.11%) and handed it a significant revenue decrease for the most recent quarter. But this developer of OLED (organic light-emitting diode) technology used in high-end smartphones, televisions, and lighting solutions has seen these kinds of headwinds before, and has grown significantly over the long run despite temporary demand disruptions.

Let's take a look at Universal Display's most recent quarter, dive into why its demand can be so erratic, and discuss its long-term prospects for investors.

A tough quarter, but not a total wash-out

The headline for Universal Display's recent second-quarter 2020 results was its $58 million in revenue, which represented a 51% year-over-year decrease driven by its customers (technology device manufacturers) cutting orders. This reduced top line made it hard to offset fixed costs, and the company reported a $1.2 million operating loss. 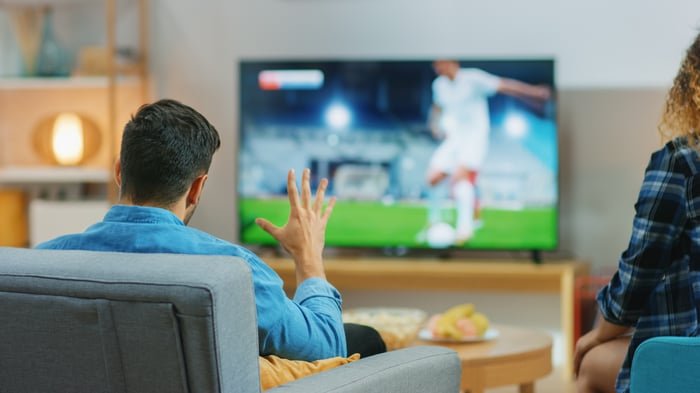 But the quarter wasn't all bad news. Gross margins remained high at 78% compared to 80% from the previous year, and the company managed to squeak out a meager bottom line $815,000 in net income after interest income gains and a tax benefit. Its cash flows and balance sheet remained strong with an operating cash flow of $26 million and cash and marketable securities of $644 million. This cash hoard combined with zero debt will enable the company to cover expenses in case of an extended recession.

Even though the revenue loss may have disappointed some, the stock has held up well following the earnings release. This may be because investors have seen this happen before.

Being a tech supplier can be difficult

The company makes money from sales of material to manufacture OLED screens (around 55% of the top line), royalties and license fees for the technology (39%), and contract services. Material sales and royalties are impacted when customer orders decrease. But why does the revenue sometimes swing so wildly from one quarter to the next? It's a function of where the company sits in the supply chain.

A representative depiction of a consumer tech supply chain. Graphic by author.

The above graphic is a simplified depiction of how Universal Display's materials get incorporated it into a mobile phone and eventually into a consumer's hands. Starting on the left, Universal Display sells to device manufacturers and recognizes revenue when the material changes hands (represented by the star). The triangles indicate where inventory is staged throughout the supply chain, whether in transit from a manufacturer to a retailer's warehouse or in a retail store.

There may be a significant amount of Universal Display's product in the supply chain that's already been captured as revenue but hasn't made it to a consumer. When consumers cut back purchases because of the pandemic, that inventory acted as a buffer, causing a wave of demand cutbacks back through the supply chain, resulting in a deep drop in orders for Universal Display's products.

In addition to demand variability, there are a number of factors at the manufacturer level that affect customer demand, such as capacity ramp schedules, product mix, and material ordering patterns, just to name a few.

These factors combine to create erratic quarterly sales. The chart below shows the last five years of quarterly revenues and the associated year-over-year changes that range from a 100%-plus gain to a 50%-plus loss. Note that over this period the stock gained 380%. 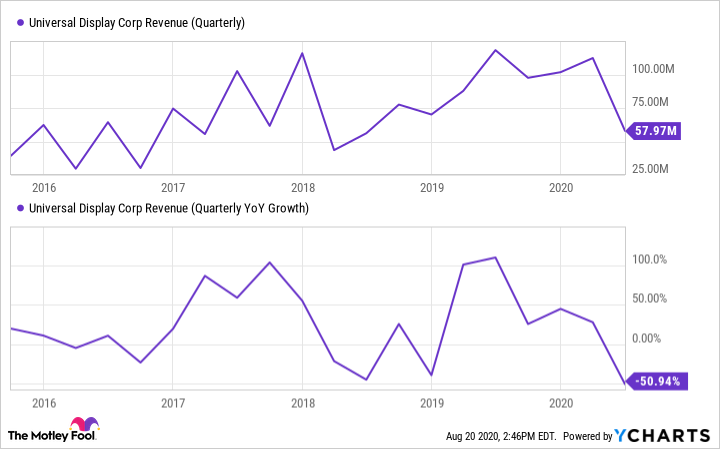 Despite the most recent quarter's disappointing results, the opportunity ahead is huge.

The company's deep patent portfolio, superior technology, and long-term relationships with major tech manufacturers give it an incredible moat. Its OLED technology is gradually replacing LCD (liquid crystal display) because it's better in a number of ways. It's brighter, thinner, more energy-efficient, and can even be used in flexible screens. With numerous manufacturing plants coming online in the next several years, the production costs will gradually come down, enabling the technology to be used in lower-cost mass-market mobile phones, laptops, and TVs over time.

Management shared on the most recent earnings call that its customers have "expressed cautious optimism" about the second half of 2020 and it has seen a pickup of orders for July, but didn't provide any revenue projections given the short-term uncertainties in the market. But over the long term, the trends are more clear. The market for OLEDs is projected to almost double over the next five years, and Universal Display is poised to capture a majority of that market given its leadership position.

If you are a long-term shareholder of this technology leader, you've seen this story before and still profited handsomely. Over the decade of the 2010s, it generated an amazing 1,560% return. In the coming decade, the company may not achieve those kinds of multibagger gains, but it is well-positioned to create solid market-beating profits for the patient investor.